David Andiel Rodriguez Reyes would have been old enough this year to attend his first year of college. But in 2006, in a barren, remote, harsh stretch of land, his life ended at just 3 years old. Reyes is one of thousands of undocumented migrant children who have died during their journeys crossing from Mexico into the United States. Now, a map depicting Arizona’s Sonoran Desert —and the unimaginable loss of life that has occurred there—is on display in Skillman Library, where it will remain through at least the end of the semester.

Toe tags (orange representing unidentified remains, yellow representing identified remains) handwritten by members of the Lafayette community represent each lost human life. It is a geolocation installation that symbolizes a red sea of death and a humanitarian crisis that has been ongoing for the last two and a half decades. The exhibit, created by the Undocumented Migration Project (a nonprofit organization that focuses on the violent social process of immigration and raises awareness through research, education, and outreach) is titled Hostile Terrain 94 and aims to bring attention to what is seemingly a never-ending humanitarian crisis.

The project was created by MacArthur Fellow Jason De León and coordinated on campus by Mónica M. Salas Landa, assistant professor of anthropology. When Salas Landa put out the call for assistance with the installation of the tags, she received help from not only the students in her Latin American Ethnography (A&S) course, but from across the Lafayette community. McKelvy Scholars and members of the A&S Club volunteered their time to hand-write each tag. So, too, did students taking Theories of Society (taught by Neha Vora, associate professor of anthropology), LatinX (taught by Sidney Donnell, acting department head of foreign languages and literatures), and Advanced Spanish (taught by Olga Rodríguez Ulloa, assistant professor of Spanish). 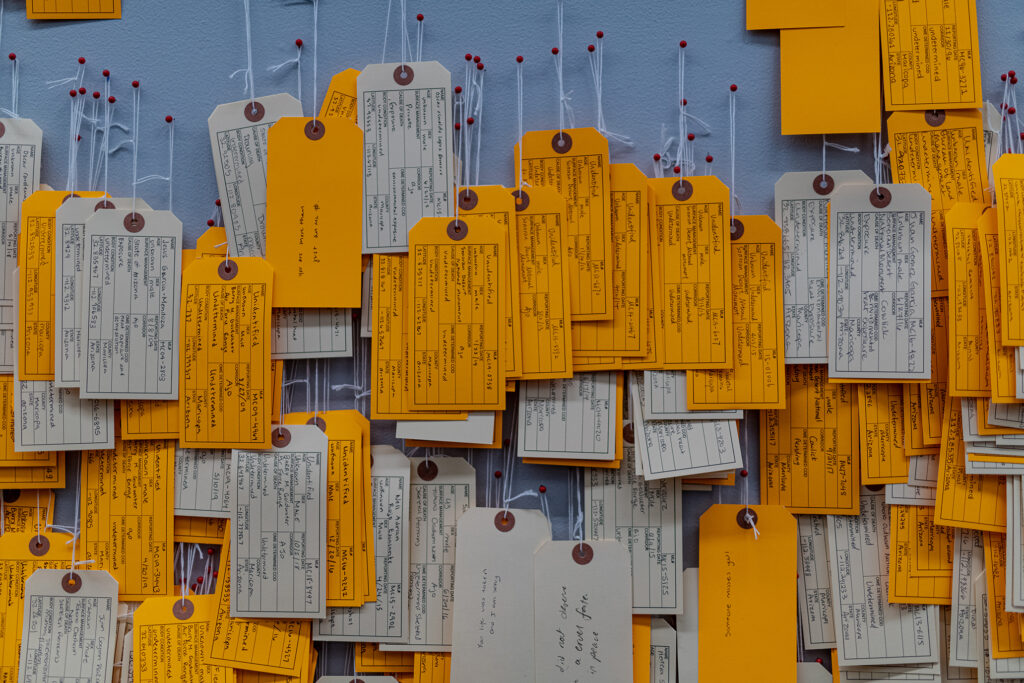 Toe tags handwritten by Lafayette students contain personal details about thousands of migrants who passed away in the Sonoran Desert. The tags are part of the exhibit Hostile Terrain 94, on display in Skillman Library through December.

Alexis Ruiz ’22 and Rebecca Scott ’22 assisted with coordinating the exhibit, and Roxane Bolon ’23 and Tara Taggart ’23 also worked closely with the group on the logistics of organizing and funding the installation, as well as organizing workshops. Several of those workshops, which took place in September, gave many other students the opportunity to help fill out tags while learning more about the migrant crisis. 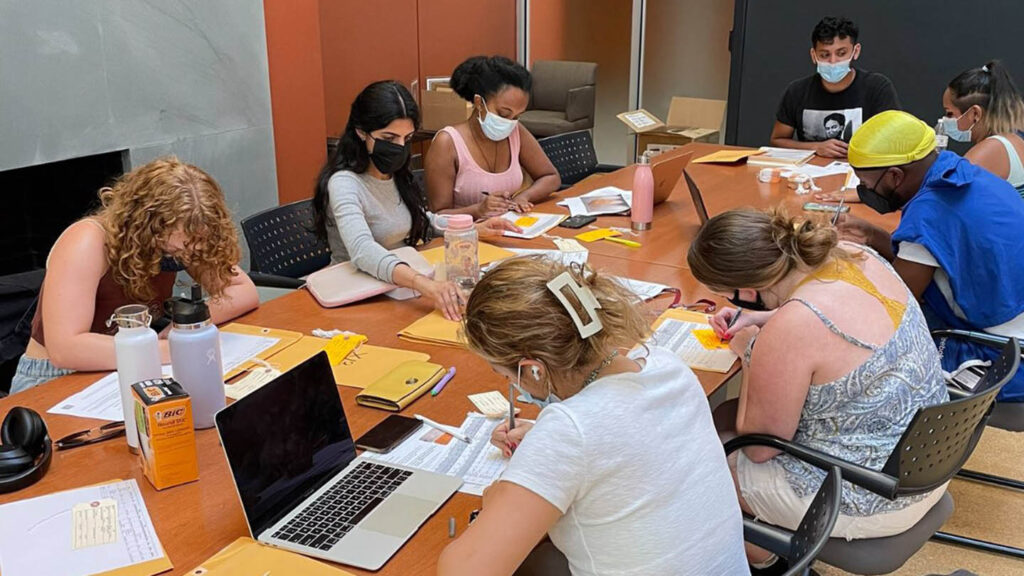 Students from across the Lafayette community volunteered to hand-write each tag for the exhibit.

“The first semester I taught here, I decided to teach the book that inspired this exhibit, The Land of Open Graves [by Jason De León]. I realized that it’s important to teach these kinds of stories, and it was very shocking for me to realize that not a lot of people were familiar with the actual facts around undocumented migration,” says Salas Landa. I realized that this book really mattered, and that it could also bring students together who have very different views on immigration.”

After more than a year of delays due to COVID-19, the installation in Skillman will open with a public reception on the library steps at 4 p.m. Thursday, Oct. 28. Then, on Nov. 9 at 4:30 p.m., a book discussion will take place in the library’s Gendebien Room featuring Prof. Vora and Douglas de Toledo Piza (assistant professor of international affairs), as well as former students of Salas Landa, Flor Caceres Godoy ’22 and Nick Sant Foster ’22. Electronic access to The Land of Open Graves is available on the Lafayette Libraries website. 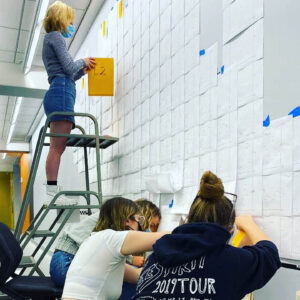 Students work on the installation of the tags.

“Reading the book made filling out the tags a very emotional experience. Even if I hadn’t read the book, it would have been very sad to write the details of someone who lost their life,” says Taggart. “When you read the book, it explains the stories of people who cross the border and what happens to their bodies after they die, and what the experience is like for their loved ones when they’re missing. Every time I wrote out a tag, I was going through their reality in my mind. That’s really powerful.”

“Writing the tags without the context of the book would have felt inherently bureaucratic. The language of the medical examiner that is used for listing each cause of death, nobody would really know what any of that means,” says Bolon. “Connecting the conditions these bodies were found in with what I was writing on the tags helped me visualize it and made it that much more important.”

The 3,400-plus toe tags represent only a fraction of those migrants who have actually passed away on their journey. Due to the deadly environment of the desert, many remains are never found. Some estimates by the Pima County Office of the Medical Examiner place the number closer to 15,000 dead since the U.S. implemented the policy known as Prevention Through Deterrence (PTD) in 1994. PTD is still the primary border enforcement strategy being used on the U.S.-Mexico border today. Raising awareness about the high human cost of PTD is one of the main interpretative goals of the exhibit.

“These people come from conditions where they know that this is a risk that they are willing to take. You have to understand the environmental and social factors that are at play for a person to come to a decision like this. It’s not an individual decision. It’s a social and political decision,” says Scott. “We hope that physically seeing these stories in this format brings an awareness and opens people’s eyes to the fact that this crisis is ongoing. Because people are still trying to get here and find those freedoms every day.”