Leland Melvin will share stories of setbacks, grit, and second chances in his talk, “An Astronaut’s Story of Curiosity, Perspective, and Change” Twitter 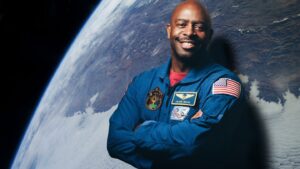 Former NASA astronaut and NFL draftee Leland Melvin, who knows all about career-ending setbacks and the restorative power of second chances, will deliver this year’s Resnik Lecture, which will be held virtually Nov. 17, 7:30-8:30 p.m.

Register to receive the Zoom link.

Melvin, who helped build the International Space Station during Space Shuttle Atlantis missions in 2008 and 2009, logging more than 565 hours in space, retired in 2014 after 25 years with NASA.

Despite a rewarding, adventurous career—he has four honorary doctorates for his service in education, the sciences, and philanthropy—he had his share of misfortunes, and the will and good fortune to overcome them.

Earning a football scholarship to University of Richmond, where he studied chemistry, he set his sights on a professional football career. But after repeated injuries, including a pulled hamstring during training camp with the Detroit Lions, Melvin changed course, attended University of Virginia, and earned a master’s degree in materials science engineering.

In 1998, he applied to the NASA astronaut program and began training at the Johnson Space Center. A mishap during a training exercise left him deaf in both ears, but emergency surgery restored hearing to his right ear.

Melvin is eager to bring his message of “An Astronaut’s Story of Curiosity, Perspective, and Change” to Lafayette and recently provided a preview of his presentation and offered his views on inclusive STEM, STEAM, and other issues.

Without revealing too much, what will be your key message when you speak here Nov. 17?

Throughout our lives, we always have to depend on getting second chances when we make mistakes or when things happen. We always have to be very resilient, gritty, and scrappy, and just go forward. So, my life is a testament to those kinds of ordeals and to handle them with grace, in a way that’s kind and empathetic and not hurting other people. I followed that philosophy to navigate through the NFL and in space while overcoming hearing loss to keep moving forward.

How did athletics and academics work together to advance your career as a scientist and an astronaut?

Athletics is all about working together as a team. And anything that we do, whether you’re going to space or working in a corporation, involves primarily teamwork if you’re going to solve big problems and do things successfully. Being an athlete gives you the perfect framework for working on any team.

When you think about working with someone, or people from all around the planet who don’t necessarily speak the same language you do, we have to sometimes resort to different ways of communicating to solve problems.

You may have all kinds of differences that you’re not used to, but you put those differences aside to get the win and to solve the problem.

You’ve been an advocate of inclusive STEM and STEAM. Could you explain the distinctions between the two?

Many times when we think of solving problems, we say science, technology, engineering, mathematics. But the arts are involved in everything that we do, whether the language arts, the creative arts, the culinary arts.

Effective STEM education involves effective communication, which involves the arts. And I think inclusive STEAM is so important because the best solutions do come from the most diverse teams. It’s been proven scientifically.

I was in space with Asian American, French, German, and Russian astronauts, all working together as a team and all tapping into their STEAM backgrounds to communicate effectively and achieve success.

Speaking of space, what’s your view on the emerging space tourism industry? Is it good for science and space exploration?

It’s a cognitive shift that most astronauts get that changes them fundamentally when they come back home, whether it’s a billionaire or Hayley Arceneaux, who works as a medical technician and became the first pediatric cancer survivor and first person with an internal prosthesis to fly in space.

She got a chance to go into space, and it changed her life significantly, just as William Shatner’s life has changed significantly. And hopefully, the billionaires’ lives are changed to where they want to send more people to space who would never get the opportunity to go, so that we can all have a more pronounced perspective shift.

What was your reaction when you first experienced space?

My first job when I got to space was to film the external tank falling back to the planet. As soon as it went out of my field of view, I saw the most incredible colors of blue that I couldn’t describe. There are not enough definitions of blue to describe the colors that I was seeing in the Caribbean Ocean. And it kind of blew my mind a little bit to see the rich colors that I couldn’t describe.

The hues were just so vibrant and vivid. That was my first real exposure to viewing the planet. Then I had other chances over the course of the mission to see the snow-capped mountains and deserts, to see the pyramids and the Nile, the Rocky Mountains. All of these places we take for granted sometimes, but to see them over and over going around the planet every 90 minutes, it just changes you.

The most important thing is it doesn’t matter where you come from; it doesn’t matter what you have done. You know there’s always a possibility to really do anything you put your mind to, if you have access, opportunity, and belief in yourself. Hopefully, Lafayette is giving you the access and the opportunity, and supporting you to believe in yourself too.

About the Resnik Lecture

The Resnik Memorial Lecture series is sponsored by the John and Muriel Landis Fund and the Farber Memorial Endowment Fund. The lectureship was established in memory of Judith A. Resnik, an electrical engineer and one of the astronauts who died in the Space Shuttle Challenger disaster in January 1986.