There are many reasons why alumni, parents, and friends support Lafayette. Perhaps it's due to inspiring professors, the ability to attend Lafayette through financial aid, impactful athletic experiences, among many. Learn why Allen '78 and Janet Haddad support the College as the community unites during Bring the Roar. Twitter

Allen, what was your experience like as a Lafayette student?

What about clubs and activities beyond football?

Allen: I played football for four years, but in addition, I was on the Rugby Club, and I did that for four years. And that was a really great experience because it was so different from the arduousness of Division I athletics. The Rugby Club was kind of a party sport, but it was very, very physically rigorous.

Janet, how did you and Allen meet?

Janet: Allen and I met here at Lafayette 46 years ago. My roommate was coming down to visit a boyfriend and I tagged along, and after that I really spent more time here at Lafayette on campus than I did at my own alma mater, East Stroudsburg State. Lafayette has such a beautiful campus. And if they would have had my major, I would have loved to have attended full time. The rest is really history. We got married here at Colton Chapel 40 years ago, and our anniversary will be coming up in April. 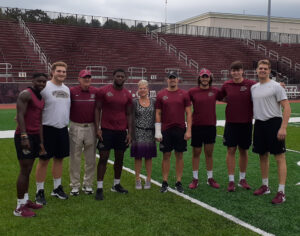 Tell me about the Sponsor a Player program.

Allen: The Sponsor a Player program was begun by Friends of Lafayette Football in about 2010. The Friends of Football was begun by Jack Bourger and John Piper. It’s an organization that helps support the football program, and the Sponsor a Player program is very personal to us. The first player we sponsored was Neal Zott, and he was a member of the Class of 2013. We’ve sponsored one or sometimes two players every year all the way up to the present. We keep in touch with our players and their families long after they’re gone. So it’s become a very personal way to encourage the fellowship and the support within the football program.

One of the families that has been particularly memorable has been the Major Jordan family. We met them five years ago and have been lucky enough to have Major an extra year because of the pandemic, but they are just like family. And this is what sponsoring athletics and players does for one. It just grows your own family, and we’re all interconnected anyway here at Lafayette through the maroon thread. So we just value that as givers.

Why do you support Lafayette?

Janet: We appreciate the opportunity to Bring the Roar here at Lafayette College. This is significant to us on various levels. It’s not just about athletics and football for us. It’s also about supporting the cheerleaders, supporting the dance team, and being involved in the extracurricular life of the College. We’ve always felt when you give what has meaning from our hearts, the receivers receive not only the gift, but part of your heart as well. That is very important.

Allen: That’s why we Bring the Roar.

During Bring the Roar, (Nov. 15-20) you can enhance the Lafayette experience for students by supporting any initiative that is most important to you. Gifts of any size leave a lasting impact. Learn more and make a gift.