Learn what inspires Bri Braswell ’16 to support Lafayette students as the community unites during Bring the Roar (Nov.15-20). Twitter 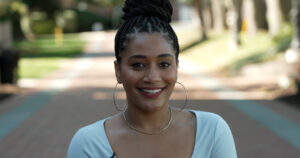 I found Lafayette through the Posse Foundation. I’m a Posse Scholar from D.C. (Posse D.C. 7). And that’s how I ended up here at Lafayette. I’m originally from Maryland and had not actually heard of Lafayette College before. I thought it was fake because when I saw brochures that were mailed to my house, they talked about designing your own major and connecting with your faculty and peers. I’m a first-generation college student, so I didn’t really know what to look for when it came to college. But the Posse Foundation was what helped me and showed me Lafayette and the opportunities that are here. And as a student, I took any opportunity that came my way. I worked in Student Involvement. I was an RA and a head resident. I was on the dance team because one of my Posse mentors and peers encouraged me to be a part of it. I was hesitant at first, but it ended up being the most glorious experience. I ended up becoming a dance team co-captain during my junior year, so I had a lot of experiences that I never even knew were going to be possible, and they all came to me here at Lafayette.

What was your major?

I majored in anthropology and sociology and minored in women’s and gender studies.

What are some of your most memorable moments as an undergraduate?

My first memorable moment was when I was with my family and I had just moved in. It was orientation. I could not remember the name of my residence hall. I remember walking from Kirby arena where orientation activities were going on. I came to the Quad and just kind of stood there because I had no idea where to go. And this student came up to me, and it turns out, she was a senior and also a Posse Scholar from Maryland. She ended up spending time talking to me and gave me an unofficial tour of campus and showed me back to my residence hall. I knew on that first day that this is where I needed to be.

Another ‘a-ha’ moment was when I was a junior. I was the dance team co-captain, and it was the year of sports for Lafayette for the Patriot League. So that was the basketball tournament against American University. And it was also the 150th game against Lehigh at Yankee Stadium. Never in my wildest dreams, first of all, did I think that I was going to be captain of the dance team, but during the 150th Lafayette-Lehigh game? And have to choreograph and perform at Yankee Stadium? It was unreal that we were two small schools in the middle of Pennsylvania going to Yankee Stadium and selling out tickets! To be able to dance and place my feet there in the middle of the field was absolutely amazing. That is something that I will never forget, and I have a beautiful memory of that time.

What did you do after graduating from Lafayette?

During my two years as a Connected Communities fellow, I created opportunities for belonging for our first-year students. I worked to connect students with partners, our partner Peer Mentor Program, and got to understand more of what it is like to be in the academic sphere and what it’s like to be a dean. And now that’s actually my dream—to be an academic dean. After two years, that position ended. I thought about what my next steps would be and a lot of people were telling me to consider Admissions. This is now my fourth year in the Office of Admissions at Lafayette. My particular territory is New Jersey, so it’s a lot of students who are close to home, but I also have the absolute privilege of recruiting in Maryland, where I’m from. I’ve gone back to my old high school to tell students about Lafayette and to tell them about the opportunities that await them here. Students who are are probably like me. They didn’t even know this college existed. But now they get to be here. Walk these bricks. See these beautiful trees beyond the Quad. I love when students get to imagine all of the opportunities that await them. They’re the ones that take it. They are the ones that create it for themselves and run with it, but I get to be just a little part of it to show them that it’s possible.

Tell me about your path to Harvard University.

I am a true believer in when something is aligned, it will come to you in the easiest way. And that’s what happened with Harvard. My best friend and I were on a trip for my birthday, and she got an email from Harvard Graduate School of Education (HGSE) saying that they were going to be having a virtual cohort because of the pandemic. And we looked at each other and she said, ‘This is it.’ The application process for HGSE had a very quick turnaround. I was nervous that I wasn’t going to get it done in time. But just as I tout to our prospective students in my high school visits about how important it is to have lasting relationships with your professors, I got to see that firsthand. I ended up emailing my former professor of sociology, Prof. [Rebecca] Kissane, who was my adviser. Now, at this point, I’m four years out of school. I sent her an email saying that I was going to take this risk and apply. And within five minutes, she wrote back saying that she would be honored to write my letter of recommendation. And that’s how I knew that this was going to happen, that everything was aligning for me.

I’d like to thank Prof. Kissane,  Matt Hyde, dean of admissions, and Brandon Morris, dean of academic advising for the first-year class. They were the ones who wrote my letters of recommendation. I’ve had different experiences with all of them during my time as a student and as a professional here at Lafayette, and that was a part of the way that I got into Harvard Graduate School of Education.

If someone were to say they’re interested in supporting financial aid, what would you say to them?

I would give them the quintessential answer of Cur Non—why not? You have the chance to bring someone’s dream to life. When you support the College during Bring the Roar, you can designate your gift to financial aid. And by doing so you are supporting the next generation of engineers, imagination warriors, entrepreneurs, social influencers, humanists, artists, and everything in between.

During Bring the Roar, (Nov. 15-20) you can enhance the Lafayette experience for students by supporting any initiative that is most important to you. Gifts of any size leave a lasting impact. Learn more and make a gift.