At a conference center in Glasgow, 3,200 miles from Easton, student journalist and environmental activist Lucie Lagodich ’22 did something that nobody else in the Lafayette community has.

She stood in front of a microphone in a room full of strangers, looked into the eyes of U.S. Special Presidential Envoy for Climate John Kerry, and asked him if the country’s goal of net zero carbon emissions is enough.

While Kerry’s answer of “no” wasn’t surprising—activity must go beyond achieving net zero carbon emissions to actually create an environmental benefit by removing additional carbon dioxide from the atmosphere—the fact that Lagodich was present to ask it is a boon to the College community. The senior (and editor-in-chief of The Lafayette) was among the many influential leaders, delegates, inventors, academics, thinkers, scientists, and activists who convened in Scotland for The New York Times Climate Hub, which was held parallel to the 26th United Nations Conference of Parties (COP26). 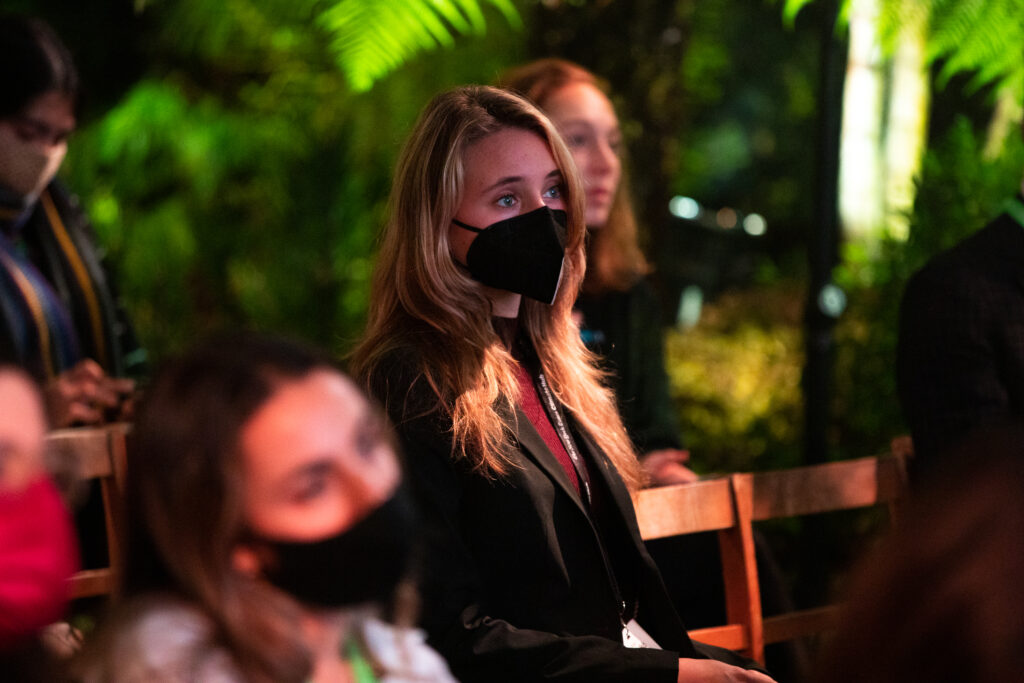 Lucie Lagodich ’22 attends one of the panels at the NY Times Climate Hub in Glasgow, Scotland. Photo credit: Craig Gibson of The New York Times

Granted a seat at the table after Katalin Fabian, professor of government and law, encouraged her to apply for journalistic credentials, Lagodich spent part of her time overseas reporting for Lafayette Today on panels about sustainable fashion and animal rights and workshops on turning “ecophobia” into activity. She was also one of over 100,000 who marched on Glasgow to demand more action on the climate crisis. But by and large, Lagodich spent her time there absorbing the hard reality that climate change is a very intersectional issue that needs voices from all over the world—including underrepresented countries that have a hard time getting representatives on the world stage.

“Climate change affects all countries, cultures, and ethnicities. One of the things I heard among the calls for activism is that more solutions need to come from the global south, because they’re the ones really facing the brunt force of climate change. People were saying that as the hardest hit areas, the global north should be assisting the global south in protection and remediation efforts as the south is on the ground, understands the situation, and can make a difference. Seeing wealthy nations from the global north discussing the fate of the rest of the world felt ‘off’ to me,” says Lagodich, who is double major in geology and policy studies with a concentration in environmental policy and a minor in Spanish. “Being from the United States gives me an advantage. It doesn’t change my passion, but it made me realize that we should be focused more on collaboration. There’s strength in numbers. I should be giving the mic to other people so they can work with us.”

At a college that is committed to taking climate action and where campus sustainability efforts are focused around key areas such as zero waste and a sustainable food loop, Lagodich hopes that her attendance at the world’s largest climate conference will open the door for broader awareness and for more Lafayette representatives to attend the event in the future. It can be difficult to put ourselves in the shoes of those experiencing climate change at the harshest levels, she acknowledges, but change can begin with empathy—even if we have a limited amount of time and energy in our day-to-day lives.

Learn About Sustainability at Lafayette

“If you’re not seeing a situation with your own eyes or experiencing the worst effects of climate change yourself, you can read the headlines and you can definitely empathize. But living in a wealthy nation on the East Coast can make it difficult to feel like there’s a sense of urgency behind climate action. It feels like making positive change can be a difficult thing to do if you’re not directly affected,” acknowledges Lagodich. “That’s why a lot of major environmental activists who are out there right now are from these small island nations or Indigenous groups—they’re the ones facing it. But by the time that major cities are dealing with it in America and in Europe, if we wait and do nothing, it will be too late. We need that kind of foresight.”

While a new global agreement was reached at COP26, the language within that agreement is a source of frustration for Lagodich, who acknowledges that the negotiations phase promoted both a sense of hope and one of disappointment for those attending  the Climate Hub. She was able to connect with a number of other students and youth activists who, like her, were disappointed that countries only agreed to a weaker commitment to “phase down” rather than “phase out” coal, and that it took until this year for the conference to agree to mention fossil fuels in the Climate Pact—an industry that had the largest delegation at the summit. Still, she looks at the overall experience as a rare opportunity she was glad to get to attend.

“I met a lot of youth activists, which was amazing. At the Climate Hub, the panelists were very accessible, as well, and you were able to chat with the panelists after their sessions to ask individual questions. I was able to connect with Pulitzer Prize-winning author and foreign correspondent Jeffrey Gettleman, which was a really amazing experience,” says Lagodich, who is considering a career in environmental journalism. “He said the best way to get people engaged in environmental causes is to find the way it’s currently affecting people, and to tell that story—to talk about what it means and what’s causing it. That’s something to keep in mind for myself, as well as for other environmental activists here at Lafayette. Let’s see what’s affecting us locally, and use that as motivation to get involved.”