In the student research poster session, Daphna Fertil ’22 and Molly Dougher ’22 finished in first place in an environmental subsection and a fuels, petrochemical, and energy subsection, respectively, and Ryan Berry ’22 took second place in the separations subsection. 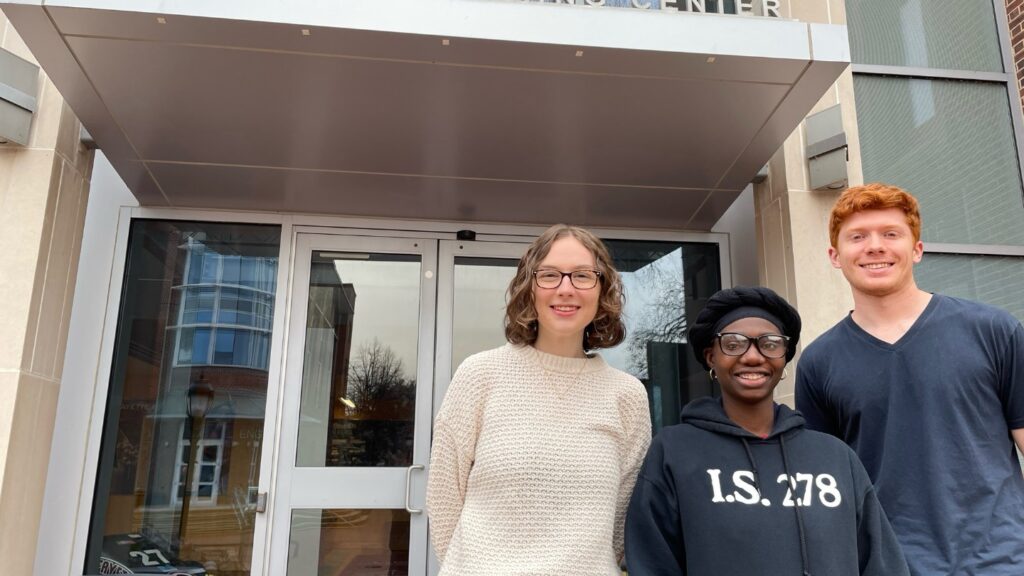 “Congratulations to Daphna, Molly, and Ryan for the well-earned recognition they received for their research posters at one of the most prestigious gatherings of chemical engineers,” says Lauren Anderson, associate professor and head of the chemical engineering department.

“Their success on a national scale showcases the strong mentoring relationships that exist between Lafayette students and faculty,” she says.

Poster sessions, which also are held regularly at Lafayette, provide opportunities for students to make a formal presentation about their work. A poster presentation provides a visual representation, in text, photos, and graphics, of a research project and helps foster a dialogue about its findings and conclusions.

Fertil, with adviser Joseph Woo, assistant professor of chemical and biomolecular engineering, is researching the effects of aerosols on greenhouse gases in the atmosphere.

“There is much known about the effects of CO2 and other greenhouse gases on our atmosphere,” she says. “However, there is great uncertainty in regard to the effects of aerosols, which are small solids or liquids suspended in air.”

Specifically, Fertil is looking at effects of exposure to ultraviolet light on glyoxal and ammonium sulfate solutions.

“Our results showed that glyoxal-based products, which are not a surface-active substance at first, became surface active when exposed to light,” Fertil says.

The research is important because glyoxal is found in natural atmospheric aerosols. With the current percentage of glyoxal found in the environment on a macro scale, it could be having an effect on our understanding of cloud formation and lifetimes in the atmosphere, she notes.

“This research will also better inform climate models that are being created to represent what is happening within our atmosphere,” Fertil says.

Dougher is investigating the technical and economic feasibility of an industrial biodiesel production as a way to reduce net greenhouse gas and pollution emissions. She is advised by Lindsay Soh, Kate and Walter A. Scott ’59 Scholar in Engineering and associate professor of chemical and biomolecular engineering, and Aseel Bala, assistant professor of chemical and biomolecular engineering,

The feedstock for biodiesel production is triglycerides, which are typically sourced from vegetable oils, animal fats, or food waste. Interesterification is a chemical reaction that can be used to convert the oil into biodiesel and is potentially more profitable than typical production methods. Dougher developed a simulation of this biodiesel plant to further investigate this reaction.

Berry, advised by Soh, is researching greener solvent alternatives to lower energy costs for the chemical industry and improve the environment.

“In the chemical industry, upward of 47% of the total energy used comes from separation processes,” he says. “In solvent-based separations, many of the solvents used are extremely hazardous and damaging to the environment. Therefore, it would be invaluable to not only lower the total energy cost but also to use greener solvent alternatives.”

The problem, he says, lies with separating the target compound (or product) from the solvent used to extract it.

“You can no longer rely on the differences in solubility because they should be very similar,” Berry explains. “A separation technique called distillation is used to separate these components—effectively boiling off your solvent while your product remains a liquid—which is extremely energy intensive and dangerous to operate.”

A new class of solvents, called switchable hydrophilicity solvents, or SHSs, is capable of changing their physical properties quite radically. In this case, SHSs can change their hydrophilicity, the property that determines how easily it can mix with water, with a small trigger of CO₂ gas.

“Imagine having a bottle with oil and water. The oil will rise to the top, and the water will sink to the bottom, creating two layers where the oil layer is hydrophobic and the water layer is hydrophilic,” Berry says. “This system is similar to how an SHS interacts with water when it is in its normal state, with the SHS forming a layer on top of the water. When CO₂ gas is added, the two layers become one, and the SHS is now soluble in water.”

This may not seem all that impressive at first, but “this is a real game changer,” he adds. “The hope is to replace current harsh solvents with this new greener alternative.”

Learn About This Major

Students in our program benefit from an in-depth curriculum, small class sizes, outstanding laboratory facilities, and collaborative research opportunities with faculty. Graduates are well-equipped to tackle the challenges of this rapidly changing field and secure top-notch jobs and graduate school placements.