The Marquis de Lafayette corresponded with the first seven U.S. presidents, but he devoted most of his parchment and ink to George Washington, who received hundreds of letters from his young protégé that today provide a real time glimpse into early American history. Maintained in its Special Collections, Lafayette College has the largest single repository of letters by Lafayette to Washington, from the earliest ones written from Valley Forge in 1777 to the 1790 letter by which Lafayette sends to Washington the key to the Bastille.

It’s one of the most important pen pal relationships from early America, ranking alongside the John and Abigail Adams letters and the rich dialogue between Adams and Thomas Jefferson in their later years, says Thomas Lannon, Lafayette’s director of special collections and college archives.

With a look to President’s Day, Lannon has reexamined the well-preserved letters written on thick, sturdy cotton rag parchment, some of which include notes in Washington’s hand indicating how he would respond to Lafayette. 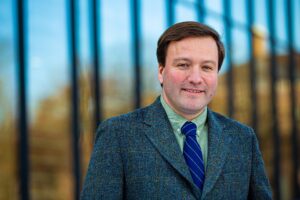 Donated to the College in 1943 by Helen Fahnstock Hubbard of New York, all of the letters are written in English, with approximately half sent from military camps in America and half from France; 81 of them are docketed in Washington’s hand, usually on the reverse of the last sheet, with the note “From Marq. de la Fayette” and the date of the letter.

Seven letters written during the Revolutionary War contain deciphering of Lafayette’s military code in Washington’s hand. Lafayette indicates locations of military forces using a coded numbering system, and Washington’s deciphering of the code appears above each number within the manuscripts.

“These letters between Lafayette and Washington, written primarily during the War for Independence, are valuable primary sources describing military strategies employed by the American and French forces against the British,” Lannon says. “Lafayette wrote Washington, whom he considered a father figure, far more often than he wrote the other presidents.”