Arthur Rothkopf left home at age 16 to attend Lafayette. Per the custom at the time of his 1955 graduation, two faculty members placed comments in Rothkopf’s permanent record.

“One of our best. An honors student. Rather quiet but all there,” wrote one professor. Added the second: “Mature in outlook and judgment. Strength of character. Extremely dependable. The kind of person you can trust to do a job.”

And what a job he did.

Lafayette’s 15th president, who died Feb. 9 at the age of 86, spent from 1993 to 2005 leading his alma mater. He oversaw the Lafayette Leadership Campaign, which raised $213 million (49% above goal), including more than $100 million that was dedicated to strengthening the campaign’s highest objective of excellence in the classroom.

Under Rothkopf’s leadership, the College played a key role in the revitalization of Easton and forged a closer relationship with the city. This included developing the Williams Visual Arts Building and overseeing an impressive growth in community outreach activities, with about half of Lafayette’s students engaged each year in sustained programs of voluntary service.

Over the years, alumni and friends of the College have created several endowed funds honoring Rothkopf and his wife of 64 years, Barbara, who were partners in all-things Lafayette, including a professorship in art history and funds supporting internships and the Art Department. As one observer noted: “Arthur was a wise and agile leader, and with Barbara at his side they were a dynamic duo on campus and in the community.” In 2005, the College awarded honorary doctorate degrees to both members of the couple, citing Barbara’s “inimitable spirit, generosity, and flair.”

June Schlueter, Dana Professor of English, served as provost during Rothkopf’s presidency. “I am deeply saddened by Arthur’s death, but I can say with a smile that it was always a pleasure and often a joy working with him,” she said. ”Arthur had a relaxed intelligence that I especially admired, and he was unfailingly principled and kind. Though I had no desire to be provost when he asked me to serve, I am grateful to have had the opportunity to oversee our academic program and to enjoy Arthur’s leadership first hand. His presidency proved a ‘defining moment’ in the life of Lafayette College.”

“One of Arthur’s greatest gifts was identifying and nurturing talent,” said Robert E. Sell ’84, Board of Trustees chair. “He created opportunities for so many that profoundly impacted not just the trajectory of careers, but the meaning and substance of lives.”

Lafayette President Nicole Farmer Hurd, reflecting on her time with Arthur and Barbara on a recent visit to Washington, D.C., said: “The time that Bill and I spent with Arthur and Barbara was nothing short of magical. They both radiated a love and commitment for this special place that was incredibly inspiring. Arthur’s dedication to Lafayette and the lasting contributions of his presidency will be felt on this campus and throughout our College family for generations. We will continue to uplift his legacy and move forward guided by his love and desire for Lafayette to be its best.”

When Rothkopf announced in January 2004 that he would step down at the conclusion of the 2004-05 academic year, then Board Chair Alan R. Griffith ’64, now serving as a trustee emeritus, described Rothkopf as someone who “has inspired confidence in all of us. He has challenged us, and helped us transform Lafayette,” Griffith said then. “His commitment to the role and importance of the independent college nationally has inspired the entire Lafayette community. His support and respect for our faculty and administration, and his desire to challenge our students, has made the Lafayette experience one of excellence as defined by any measure.

“Lafayette has become the first choice for more and more of the best and brightest students in the nation,” Griffith added. “The College’s improvements in admissions selectivity and the quality of incoming classes show that it has achieved ever greater national recognition for academic excellence under Arthur Rothkopf’s leadership.”

Rothkopf earned a law degree at Harvard after graduating from Lafayette, and went on to serve in the U.S. Securities and Exchange Commission and the U.S. Department of the Treasury. Later, he joined the law firm Hogan & Hartson, where he specialized in tax, regulatory and legislative representation of U.S. and international clients. After leaving Lafayette’s presidency, Rothkopf served as senior vice president and counselor to the president of the U.S. Chamber of Commerce. There, he led the education and workforce initiative while also continuing to serve his alma mater as a trustee emeritus for 17 years.

It was in 1992 that President George H.W. Bush appointed Rothkopf to be deputy secretary in the Department of Transportation, where he had earlier served as general counsel. As deputy secretary, he had major roles in defining government positions on issues such as foreign investment in U.S. airlines, the future role of the U.S. merchant marine, trucking deregulation, and other matters related to aviation, highways, railroads, and maritime affairs. 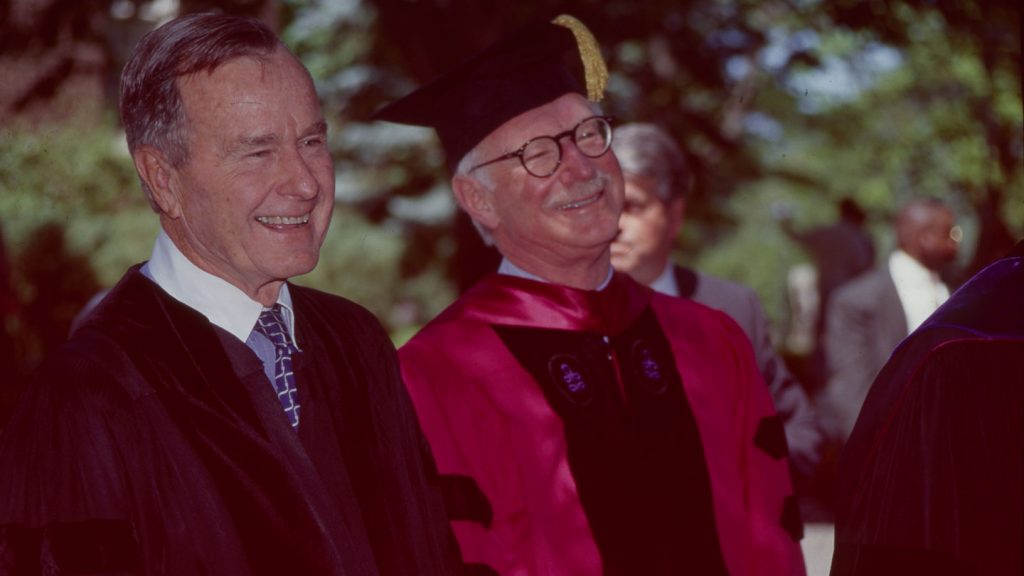 In 1998, Bush accepted Rothkopf’s invitation to deliver the College’s commencement address and receive an honorary degree. Twenty years later, at the 2018 ceremony in which Rothkopf and his wife, Barbara, were inducted into the Société d’Honneur, which recognizes exceptional lifetime generosity to the College, Dr. Mark L. Graham II recalled an anecdote from Bush’s visit to campus.

“Prior to the Commencement activities, President Rothkopf and President Bush emerged from the Farinon Center, just the two men, to go for a walk about the campus,” Graham said. “I remember well those two tall men, both in physical stature and in life accomplishments—one for Lafayette, one for these United States—just headed out on a friendly chat and a stroll across the campus. That is my most lasting image of Lafayette.”

In awarding an honorary doctorate to Rothkopf as he concluded his presidency in 2005, the citation that was read aloud at the ceremony quoted the faculty comments in his permanent record, then concluded: “Arthur, you have embodied—and advanced—Lafayette’s educational mission with consummate integrity, diligence, devotion, and vision. Your college trusted you to do a job. You have done it superbly.”

In addition to his wife, Rothkopf leaves behind his two daughters, Jenny and Katy Rothkopf; sons-in-law Eric Huffman and Jim Hardin; granddaughter Sadie Rothkopf Huffman; and extended family and friends—all of whom will miss him terribly. The family asks that in lieu of flowers, friends should please consider a donation to an effort at Lafayette that is of special interest to them, or to another cause of their choice. As Lafayette continues Arthur’s commitment to academic excellence, a gift to the Pardee Hall renovations project may be fitting.

A celebration of Rothkopf’s life will be held in the spring.