Alan Dowty, a highly respected political scientist, will provide a comprehensive review of alternative ways to solve the conflict via a virtual lecture Twitter 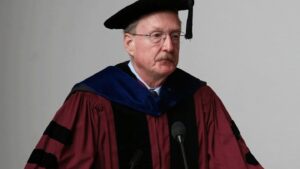 Alan Dowty (photo courtesy of the University of Notre Dame)

Political scientist, author, and historian Alan Dowty, a highly regarded authority on Middle East relations and politics, will deliver via Zoom the annual Marblestone Memorial Lecture March 8 at 8:15 p.m., focusing on a comprehensive review of alternative ways to solve the Israeli-Palestinian conflict.

“Prof. Dowty is one of the most authoritative people in the field of Middle East politics and was president of the Association for Israel Studies,” says Ilan Peleg, Charles A. Dana Professor of Government and Law, a member of the steering committee that selected Dowty as this year’s Marblestone speaker.

“I’ve known him for 40 years,” he says. “He was selected recently for a Lifetime Achievement Award in Israel Studies by the Association for Israel Studies and the Israel Institute for his work in the field of Israel studies.”

Peleg says he suggested to Dowty the Israeli-Palestinian conflict as a possible topic, and “he immediately agreed.”

While headlines have been dominated by the Russia-Ukraine situation, Peleg notes that the Israeli-Palestinian conflict, which has shaped the modern geopolitical landscape in the Middle East for more than 70 years, “is not going anywhere.” Dowty’s latest book, Arabs and Jews in Ottoman Palestine, traces the Israeli-Palestinian conflict back to the 1880s during Jewish immigration to Ottoman Palestine.

For scholarly material in his own classes, Peleg uses the fourth edition of Dowty’s Israel/Palestine, which explores the conflict by putting it in broad historical perspective and is used by many courses on the Middle East in the U.S.

Dowty will speak for about 45 minutes and then take questions from the audience.

A professor emeritus in Notre Dame’s Department of Political Science, Dowty has published seven books and more than 130 articles on the Middle East, U.S. foreign policy, and international relations.

After receiving a Ph.D. from University of Chicago in 1963, Dowty taught at Hebrew University in Jerusalem for 12 years. He joined the faculty in Notre Dame’s College of Arts and Letters in 1975, where he continued researching the Middle East.

The lecture series was established in memory of Howard Marblestone, Charles Elliott Professor of Foreign Languages and Literatures. A member of the Lafayette faculty for more than 30 years, he taught courses in Greek, Latin, biblical Hebrew, and modern Hebrew languages and literatures; classical literature in translation; classical mythology; and the ancient history of Greece, Rome, and Israel. He was the coordinator of the interdisciplinary classical civilizations minor.

Remembering his close friend, Peleg says, “Howard was universally loved on our campus, respected by his colleagues, admired by students, and cherished by alumni. In a way, he was the ideal of what we want to have in a faculty member.”

Carol Guzy, a Lehigh Valley native, has documented the human condition all over the world