Prof. Andy Smith shares insights about the history, significance, and power of the classic film ahead of its 50th anniversary and return to theaters Twitter

Francis Ford Coppola’s epic crime film The Godfather, which premiered in New York City on March 24, 1972, will be returning to theaters beginning Feb. 25, 2022. To celebrate the anniversary, all three films in The Godfather trilogy have undergone a meticulous restoration and will be released in 4K Ultra HD March 22, 2022. The Godfather is widely regarded as a cinematic masterpiece and one of the best films of all time. Upon its original release, it was well received by both critics and audiences. It broke box office records to become the highest-grossing film of 1972 and, for a period of time, the highest-grossing film to date. 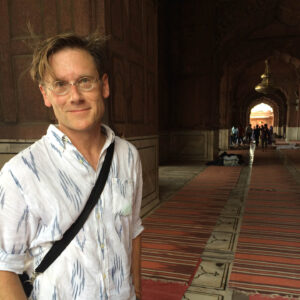 We asked Andy Smith, associate professor of film and media studies, who teaches a course on American Cinema of the 1970s, to share his insights on the film’s history and lasting legacy.

What makes The Godfather such an enduring classic and example of excellence of American filmmaking?

The film begins with the words “I believe in America,” but they are uttered against a black screen. The fade reveals a subdued but striking portrait, an immigrant American enveloped in deep shadow, seemingly looking into the camera, and sharing the tragic story of his daughter’s brutal assault and the subsequent failure of the police and courts to hold the perpetrators accountable. The frame slowly pulls back to reveal his audience, Don Corleone (Marlon Brando), the powerful gangster whom the father now sees as his daughter’s only chance for justice.

The Godfather appeared during a time of great cultural trauma, when Americans had grown weary and skeptical regarding the ability of leaders and institutions to function properly or transparently, to care for and do the right thing for Americans at all. The film’s bereaved father claims he still believes in America, but America is now a benighted land, a place that allows and even enables the devastation of its young and vulnerable. His dogged belief in America and his desire—he really wants vengeance, not justice—requires a turning away from established institutions and an embrace of the lawless gangster, the man of violence who, as ever in American myth, it seems, is the pathway to regeneration.

It’s not difficult to see the portrayal of the Don and his family as a better—even a more moral—option than the so-called legitimate or respectable options available to everyday citizens. Cops, politicians, even movie moguls are corrupt, and the Don typically pulls his strings of violence only against those who are portrayed as worse or less than reasonable. He is the charismatic good bad man, a staple of the American Western and more, the man who knows the only way to establish order and mete out justice is to operate outside the prescribed lines of so-called civilization.

Partaking again of the pleasures offered by this dominant strain in American cinema, might it be possible for an audience 50 years on to connect with the idea that American institutions have failed us, to embrace those who suggest that transgression and even violence is the only viable path to cure our social ills and address our grievances? Might the lessons we take in the current moment from The Godfather be that we can love and believe in America only by elevating the outlaw and investing in violence to achieve our ends—even to the extent of demolishing institutions, protections, laws, and some of our own people? Might some audiences in 2022 take The Godfather as validation of a preconceived belief that their own lawlessness is justified, even patriotic?

That way lies carnage and desolation, of course, as the story of the young godfather, Michael Corleone (Al Pacino), plays out, not only in the first film but over the sweep of The Godfather trilogy. But the film is beautifully made with a supremely talented cast and crew. It’s painterly and slow and smart and seductive. Is it possible for a viewer to get lost in the film’s lush audacity, in its romantic flirtation with gangsterism, and miss the film’s warnings? Yes, of course. Audiences do it all the time. It’s only a movie, after all. Perhaps not surprisingly, The Godfather is typically included in a list of Donald Trump’s favorite films. Supposedly Richard Nixon loved the film Patton—the film for which Francis Coppola won his first Oscar, for screenwriting—and loved screening it at the White House, not understanding it was, at least in part, a critique of the titular character. The point is, the media is not transparent and it is not value-free, and there is no guarantee we all take away the same or even the correct lessons from our encounters with it. Like any valuable piece of art, it requires something from us as well.

In the era of straight-to-streaming films, what is the significance of having the experience of seeing The Godfather on the big screen?

I like the notion that it should take a little effort to see this film. Maybe not for all films, but The Godfather deserves to be encountered on a large screen in a darkened theater. It’s a peek into our collective darkness, and placing our bodies and brains amid the shadows to witness this sprawling heart of American darkness is best played out via something other than our iPhones and tablets. If you can, I’d set aside your personal device and take an approximate trip back to the cultural moment of 1972. See it with other people, those you know and surrounded by those you don’t.

What is the potential impact of a restoration on a film that was originally composed with dark and murky undertones?

I’m curious to see this latest restoration. Coppola is a filmmaker who constantly tweaks his films, and restorations can often be wonderful. I’m hoping the changes are not over the top, colors popping off the screen like a Marvel movie, and the like. Cinematographer Gordon Willis’ nickname was the “Prince of Darkness,” and his lighting in the film is so spot on. I can’t imagine some of the shadowy scenes brightened up. We’ll see. The film is a period piece, an extended post-war brood over what kind of place America is and will become, but also a product of its own conflicted time, the early 1970s. The film shouldn’t look like now, and it should not adjust how it looks to appease current tastes.

What is the significance of 1970s filmmaking, an era that brought a new group of young filmmakers (Coppola, Martin Scorsese, Steven Spielberg) who are still revered today?

The 1970s were variously referred to as “A Decade Under the Influence” and/or the “Last Golden Age of American Film,” but no matter what it’s labeled, the time between the collapse of the old Hollywood studio system and the rise of corporate-driven movie making was a cultural pivot point and an astonishingly rich extended moment in the history of American cinema. Coppola’s films The Godfather and The Godfather, Part II, The Conversation, and Apocalypse Now, Scorsese’s Mean Streets and Taxi Driver, and Spielberg’s Jaws are all great films, artfully speaking to their cultural moment in memorable ways. Each of these films is a fully realized piece of cinema, but it’s also fascinating to see the work of these filmmakers since the 1970s. In their day, The Godfather and Jaws helped usher in the era of the Blockbuster, but I’d say Scorsese gets the last word on the American Gangster picture, first through 1990’s Goodfellas and then, in 2019, with The Irishman, a devastating and elegiac takedown of gangster life. Coppola attempted his own coda with the recent re-cut and retitling of The Godfather, Part III, but for me the real endpoint is Robert De Niro (the young Vito Corleone from Godfather II) as The Irishman’s aged and infirm Frank Sheeran, wheelchair-bound and abandoned, quietly dying in the halflight of a Philadelphia nursing home.

Learn about this major