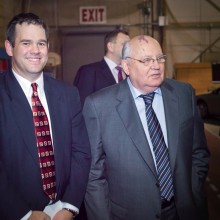 Prof. Sanborn with Mikhail Gorbachev, the former leader of the Soviet Union, who delivered a major address at Lafayette College in 2011.

“The way this conflict is being framed in Russia today is that Ukraine is controlled by the CIA and is the aggressor,” says Sanborn, who specializes in the history of violence in 20th century Russia and Eastern Europe and has been part of conversations on campus and in the media about what’s happening between Russia and Ukraine.

“The Russian position is that Ukraine, using American weapons, is about to ‘invade’ the Ukrainian provinces of Luhansk and Donetsk, parts of which are held by Russian-backed separatists, and Russia has to move in to protect those territories,” says Sanborn, who’s writing a book about espionage during the Cold War.

“One way to think about what’s going on now is that the Russian government is using these old KGB pretexts about foreign subversion to reduce the sovereignty of Ukraine and to try to reshape the playing field of the great powers today,” he says.

Foreign observers have long noticed that Russian and Soviet leaders publicly stress the dangers of Western meddling during periods of crisis, but those observers often argued that those leaders were consciously deceiving their public for their own political gain.

“The West assumed that Stalin was using the threat of foreign and domestic espionage and sabotage as an excuse in order to eliminate his enemies,” Sanborn says. “It turns out that, for the most part, the high leadership actually believed what they were saying in public. They did think there were massive conspiracies against them.”

That viewpoint is still embraced by Vladimir Putin, a former KGB officer. Sanborn notes that Putin laid out many of the same conspiracy-laden grievances during a Feb. 21 address in which he questioned the legitimacy of Ukraine as an independent nation.

“I’m not convinced that he thinks he’s lying,” says Sanborn, noting that Putin and other Russians in his sphere of influence believe that the so-called color revolutions in Georgia, Ukraine, and Kyrgyzstan were all inspired by the CIA and European spy agencies to advance their own security interests.

“And that has two outcomes to it,” he says. “One is that it refocuses the attention on the superpower conflict. And the second, the corollary to this, is that the Ukrainians themselves are left out of this picture. They’re either doing what the Russians want or doing what the Americans want. But there can’t be, within this sort of worldview, a Ukrainian political sovereignty or agency.”

Sanborn has been in contact with colleagues in Russia who thought Putin was just going to strong-arm concessions from the West through his military buildup and not choose to invade Ukraine.

He also observes that paranoia is a common feature of security narratives in many countries. “It’s dangerous to say, oh, well, the Russians are uniquely all caught up in this paranoid fantasy,” he says, drawing parallels to how conspiracy theories have also gained traction in the United States among those who fit them into their particular world views.

“I think we can see now how the effects of a conspiratorial culture can influence real events,” Sanborn says.