Professor of government and public service comments on economic impact the U.S. may face as a result of Russia's invasion of Ukraine Twitter 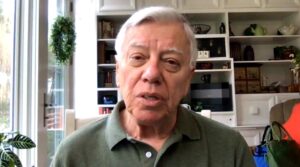 Prof. John Kincaid appears on WFMZ-TV to discuss the economic impact of Russia’s invasion of Ukraine.

With the Dow dropping significantly on Wednesday and Thursday before making a rebound, the U.S. economy is in a constant state of change as Russia’s invasion of the Ukraine progresses.

John Kincaid, Robert B. and Helen S. Meyner Professor of Government and Public Service, told WFMZ the potential economic impact this time is much greater than in recent, modern wars.

“The last two wars that had a significant effect on the economy were WWII and the Arab Israeli War of 1973, when we had the Arab boycott in response to U.S. support to Israel. That triggered a decade of inflation and cost Jimmy Carter re-election as president, ultimately,” Kincaid said.

For now, Kincaid feels the U.S. can rebound quickly compared to the past.

“Depending on how Russia responds down the line and what future steps we’re taking, I think the economy will adjust to this disruption over the next year,” he said.

Categorized in: Faculty and Staff, Featured News, Government and Law, History, In the Media, Russian and East European studies