There are two “wow” moments for soccer players when they enter their home stadium: seeing the lush green of a well-manicured pitch and the surrounding venue, full of atmosphere and support. Former Lafayette soccer player Peter Gummeson ’80 wants to create those moments for the men’s and women’s soccer teams at his alma mater, and thanks to his major gift, those dream upgrades are on their way to becoming a reality.

This lead gift is a catalyst for the estimated $3.6 million project to create the Gummeson Grounds: Home of Mike Bourger ’44 Field at Oaks Stadium, and is contingent on additional fundraising.

Gummeson, who credits Lafayette for giving him a springboard for a successful career in finance, lettered for the College’s soccer team. He’s followed the successful program over the decades, recognizing the importance of helping to create a facility that players, fans, coaches, and alumni can be proud of and that brings meaning to “home field advantage.”

“One chip on the shoulder of every [Lafayette] athlete is it’s the smallest school in the conference,” Gummeson says. “We find ways to rise above that. This is a call-to-arms project that benefits the men’s and women’s teams. Let’s create a venue that is the best in the Patriot League and enables the coaches to attract the highest quality players.”

The proposed project will include updated roof covered seating, English-style terraces that run behind the goals and along the sidelines, and an irrigation system for an immaculate playing surface. 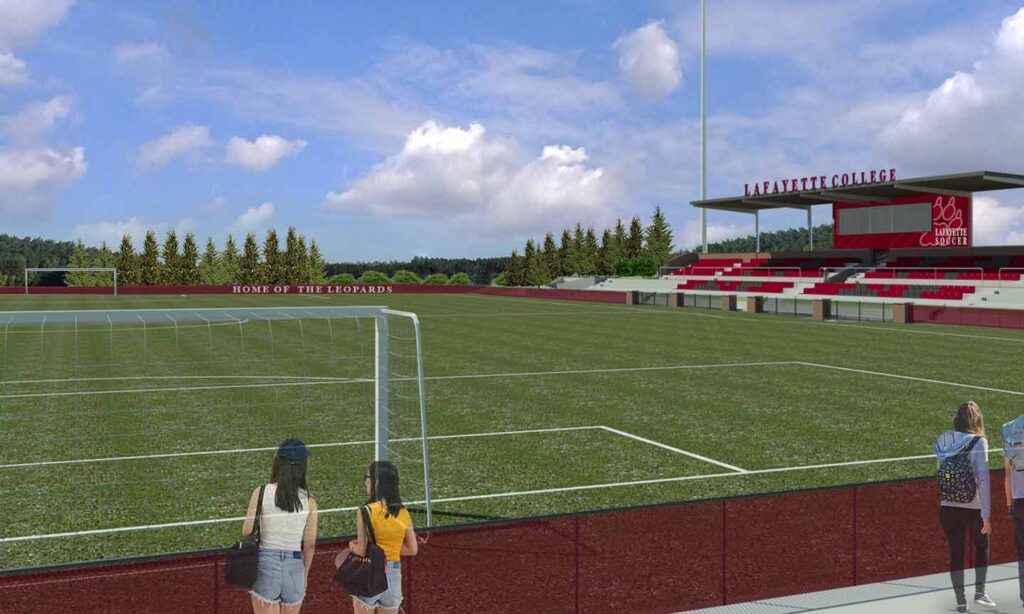 Architectural rendering of the view of the stands at Gummeson Grounds at Metzgar Athletics Complex. A lead gift from Peter Gummeson ’80 initiated this capital project, which will require additional fundraising to secure its completion.

“The environment we provide our players is critical,” says Mick Statham, head coach for the women’s team. “I have always thought elite performance came out of elite training and an elite environment.”

Gummeson, Statham, and Dennis Bohn, men’s head coach, have been in lockstep while thinking through these significant updates and how they can better the College’s soccer program, a program that already has a storied history. The men’s team, started in 1913, has won seven Patriot League Championships (second highest in the Patriot League) and has achieved three East Coast Conference titles, and the women’s team, which began in 1990, is well positioned to compete for championships. The new stadium will elevate those chances even more.

“This was really a vision of Peter’s, who’s trying to replicate, on some level, the uniqueness of an English football atmosphere,” Bohn says. “This style will make Gummeson Grounds: Home of Mike Bourger ’44 Field at Oaks Stadium stand apart from nearly every other American college soccer venue.”

Statham points out that every aspect of the soccer program—recruiting, coaching, facility development—has to continuously develop.

“Because in Division I sports, if you’re standing still, you get run over,” he says.

Sherryta Freeman, director of athletics, couldn’t agree more. “This lead gift from Peter Gummeson ’80 is the spark that will ignite Lafayette soccer. I am so appreciative of Peter’s generosity and desire to elevate the men’s and women’s soccer teams at Lafayette,” says Freeman. “The future impact of this stadium will be tremendous, including its influence on recruiting, the student-athlete experience, and our ability to continue creating a championship culture.”

While Gummeson’s lead gift is a generous start to the project, the College looks to its Leopard family to help bring it to fruition.

“It’s hard to eloquently put into words what any gift we receive means to us,” Statham says. “It’s transformative. Every bit counts.”

Bohn likens this project to a soccer match: “Peter kicked the ball off and started the game,” he says. “But we need many other people to be involved to win the game.”

A longtime supporter of Lafayette, Gummeson previously established the U. Peter C. Gummeson ’80 Scholarship for men’s soccer and has provided annual operational support for men’s soccer, among other gifts.