As an undergraduate, Heidi Ludwick Hanson ’91 could see how essential the Portlock Black Cultural Center became to her peers. For the Black student body, it was “their home away from home,” Hanson says. “It really was the crux of them feeling like they had a place at Lafayette.”

Three decades later, Hanson has provided the lead gift for the expansion and revitalization of a new Portlock Center, continuing her mission to both enrich the multicultural student experience on campus while also aiming to bolster the center’s impact on the rest of the student body.

The gift supports a multi-million dollar renovation of a historic home that was moved to its final location last summer. The five-year project, expected to be completed this spring, will include dedicated spaces to host speakers, artwork, and social gatherings, along with a new wraparound porch and second-floor residential space. 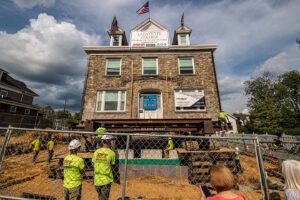 Lafayette moved a stone home, originally located at 517 Clinton Terrace, to its new location a block away, last summer. The renovated home will serve as the new Portlock Black Cultural Center.

“My hope is that the new Portlock Center will leave an impression that students will carry forward into the rest of their lives,” Hanson says. “Maybe that impression happens when they come to hear speakers, or maybe it’s through the friendships they make at the center.”

For Hanson, alongside her husband Dan, this latest gift is a portion of their overall philanthropy aimed at strengthening Lafayette’s mission to bolster diversity in both its on-campus experience and recruitment. In 2017, the couple contributed $5 million to establish the Daniel and Heidi Hanson ’91 Center for Inclusive STEM Education, which has since provided research and resources to increase women and minority representation in the science, tech, engineering, and math fields. Beginning July 1, Wendy Hill, Rappolt Professor Emeritus of Neuroscience, will serve as the inaugural full-time director of the center.

Hanson says the center’s improvement in recruiting diverse faculty has been especially rewarding.

“I firmly believe that you need to have representation in your professors and the administration in the school so that diversity will follow in the student body,” she says. “If the students don’t feel like they have people they can go to who are like them, then that creates a problem. So that is why I have made this my focus.”

Hanson sees the Portlock Center as a natural extension of that mission. Having a place to enrich the multicultural and Black experience on campus will lead to a more diverse student body, which will then lead to more diverse recruitment, she says.

Hanson also believes the gift is, in part, an opportunity to recognize Chawne Kimber, Lafayette’s former math department head, now dean of the college at Washington and Lee University. Kimber and Hanson first connected in 2009 for the creation of the Summer Program to Advance Leadership in Science, Technology, Engineering, and Mathematics (SPAL), which Kimber led and Hanson helped to fund. The six-week summer initiative aids underrepresented students who are considering a transition into STEM fields.

“Kimber has been such an important part in the programs we’ve supported at Lafayette,” Hanson says. “We just really felt like this donation encompassed what we want, which is to make students feel at home at Lafayette and to honor someone who, I think, has done tremendous work at making that happen. It was such a natural fit to contribute to the Portlock Center, and to do it in her name.”

Founded in 1970, the Portlock Black Cultural Center’s stated mission is to support “the educational and social experiences of students of African, Latino, Asian, and Native American descent, as well as the LGBTQIA population.”

Its new location, which will be on the corner of McCartney and Hart streets, will include larger spaces for both indoor and outdoor programming.

“I look forward to the programs, opportunities, and discussions this new center will provide not only to our students of color but to the larger Lafayette community,” says Robert M. Young ’14, Lafayette’s director of intercultural development, in a statement to potential donors. “I do believe the essence of the existing Portlock Black Cultural Center will be transferred to this new center, and it will create lasting memories for future Leopards.”

That essence combined with the upgrades are what Hanson hopes will attract more members of the student body for events and speakers, including those outside of the communities the center typically serves.

“If you have a place like the Portlock Black Cultural Center that can open up to multiracial discussions and topics that are of interest to try to bring our community together, you’re going to be able to bring in guest speakers who will really help the environment as a whole,” Hanson says. “If we can get the Portlock Center to be state of the art, people are going to come, and feel comfortable having these discussions.”

Just as important, Hanson knows the student body has been asking for both space and opportunities that enrich and encourage diversity.

“I think over the last few years they’ve really pushed to improve our community,” she says. “And we owe them this. We owe them a place where they can have those discussions and feel like they are bettering life on campus.”

How you can help