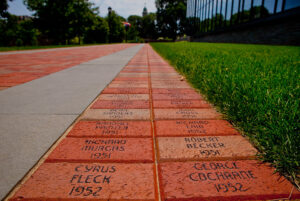 To honor Founders’ Day on March 9, President Nicole Farmer Hurd invited a very special member of the Lafayette family to participate in her video series “Need a Lift?”

Jane Fleck is part of the Fleck family that created the Fleck Consistent Giving Society, which honors alumni, parents, and friends who recognize the value of consistent support for the College by giving for five or more consecutive years. (See images of the brick walkway near Skillman Library.) The society is named in honor of Jane’s late father-in-law Cyrus S. Fleck Sr. ’20. An active presence at Lafayette for more than three-quarters of a century, he served as a member of the board of trustees for 47 years and was the inaugural recipient of the Lafayette Medal for Distinguished Service. At the time of his death in 2000, 12 days before his 101st birthday, he was the College’s oldest living alumnus. The Cyrus S. Fleck, Sr. ’20 Scholarship Fund was established in 1999 to support student-athletes.

Jane’s husband, the late Cyrus S. Fleck Jr. ’52 also had a remarkable connection to the College. His career at the College spanned 44 years, including 32 years as registrar. An annual award recognizing outstanding contributions to the campus community by an administrator is named for him.

On March 9, we honor our past, celebrate the present, and invest in the future

Ride along with President Hurd on her "listening and learning tour" of campus
Categorized in: Giving News, Need a Lift, News and Features