Under the skillful guidance of directors Billy DeVito ’22 and Jay Ascher ’22, two productions exploring passion and heartbreak and listening—or the lack of it—take the stage Twitter 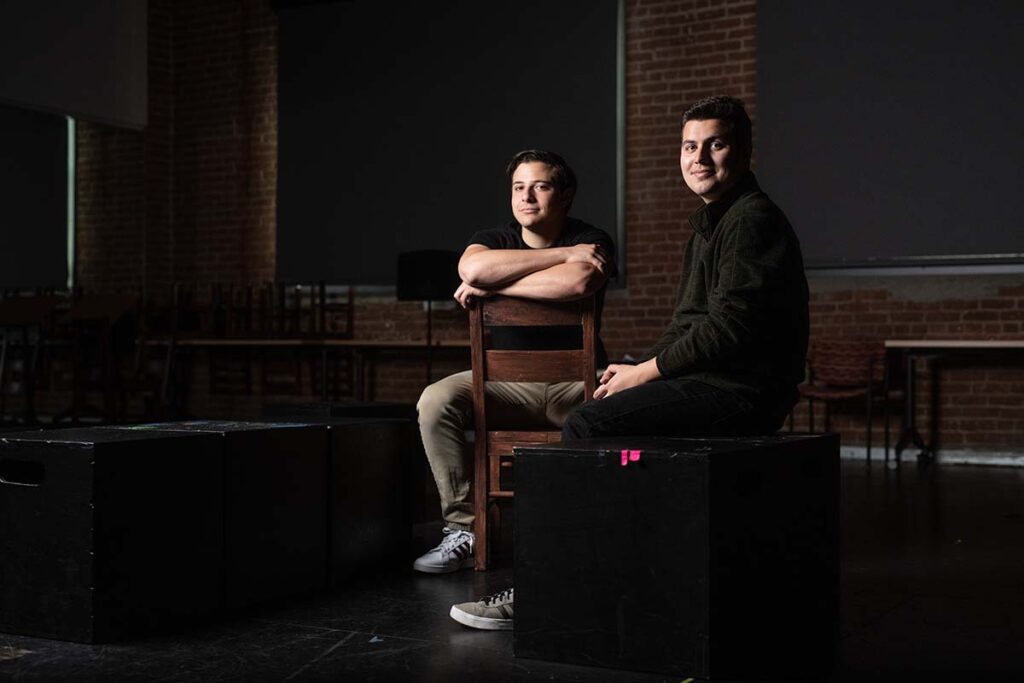 A man loses his lover.

Both are the basic through-lines of two one-act plays that will be staged at Lafayette College on April 7 and 8 at 7:30 p.m. in the studio theater at 248 N. Third St., part of the downtown Williams Arts Campus.

The Parade, or Approaching the End of a Summer by Tennessee Williams, directed by Billy DeVito ’22, is an autobiographical account of Williams’ summer affair with Kip Kiernan. The play was written in 1941 but never staged. Later in Williams’ life, the play was expanded to a full-length production called Something Cloudy, Something Clear. Sadly, the homosexual relationship in it became more shrouded than how it is directly portrayed in the one-act.

Sharing the bill in April is Jay Ascher ’22’s interpretation of Louder, I Can’t Hear You by William Gleason. It depicts a mom, whose husband, son, and daughter trample over her and never hear her. A visit to the doctor to see what this condition might be reveals it is just a common social problem. The show debuted in 1974, illustrating how this problem is not new.

DeVito, a theater and government and law double major, directs the play as part of his senior project before heading off to University of Chicago for a master’s degree in theater. While he contemplated staging a production of the Jean-Paul Sartre existential drama No Exit, a class with Michael O’Neill, associate professor of theater, about American drama on film prompted DeVito to change his mind. In the course, DeVito saw William’s Cat on a Hot Tin Roof and after discussions with O’Neill, thought that The Parade could have more impact.

“The full-length version was poorly received, but the one-act is unguarded, raw, and honest,” says DeVito. “It is sensual and serious. Nothing is hidden, just the type of story that needs to be told at Lafayette.”

The production hired an intimacy coordinator to ensure the actors remained comfortable yet believable as they navigated the power of the relationship between main characters Don and Dick.

“The actors are doing great with the text and production,” he says.

DeVito spent many hours doing research about the show and its playwright. “I read personal letters, watched productions, and investigated the real people who inspired characters,” says DeVito.

Ascher, a film and media studies (FAMS) and theater double major, also spent time finding the right show. He and O’Neill talked over the summer about options, and O’Neill passed along a lengthy list of dramatic comedies. Louder, I Can’t Hear You felt apt.

“During COVID, I was in a two bedroom apartment with my mom and sister,” he says. “We were forced to listen to each other. But now as life returns to normal, everyone has fallen back into their own worlds and are not paying attention or listening or caring.”

His research on the show had him view past productions.

“This show is either a hit or a miss; it all depends on how well the actors can land the jokes,” he says. He is striving for a hit.

So he spent time studying comedic timing. “In a show about not listening, the actors aren’t able to use a typical convention of hearing and reacting,” he says. “It makes timing even more crucial.”

Ascher feels that the student cast is doing “phenomenal.”

Both students completed the theater class on directing last semester, but as a FAMS student, Ascher has directed from behind the camera with frequency.

Directing will be a helpful skill as Ascher plans to attend rabbi school and exercise his talents in leading worship and adapting his theater and stand-up comedy skills for sermons.

“Both these beginning directors have distinguished themselves at Lafayette as excellent theater students and committed young men dedicated to making our world a more inclusive, tolerant place,” says O’Neill. “The plays they have chosen to direct embody their commitments. Both Jay and Billy represent the best of our Theater Department; it is exciting to think about these productions simultaneously as their College swan songs and their entrances on the post-College stage where I know they will make a difference.”

Productions of 'The Parade' and 'Louder' will be staged in Lafayette's downtown studio theater, 248 North 3rd St., April 7 and 8 at 7:30 p.m. The shows are open to the public and free.