'The joy and renewal spring brings is there, but under the shadow of destruction and death from war. I believe hopefulness remains due in large part to the collective spirit of strength' Twitter 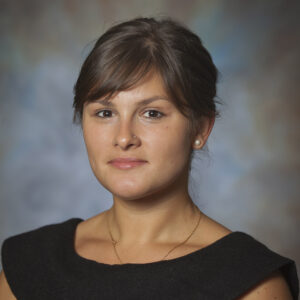 Olena Ogrokhina, associate professor of economics at Lafayette College, was raised in Kyiv, Ukraine and studied at the Kyiv School of Economics. Here, she shares her hopes and fears as her war-torn homeland reels from and resists Russian aggression.

How are your friends and family coping?

Coping with the war is hard. Emotions come in waves. Some days people feel very confident, strong, and hopeful, and some days it feels like there is a lot of despair and anxiety. My mom still goes out and works on her flower and vegetable garden when it seems safe. She sends me photos of the budding flowers and veggies, which is bittersweet for us both, hoping that the food from the garden remains a treat, not a necessity.

The joy and renewal spring brings is there, but under the shadow of destruction and death from war. I believe hopefulness remains due in large part to the collective spirit of strength. Seeing how people in other towns are fighting the Russians, as well as the progress that the Ukrainian army is making is incredibly heartening. People are constantly checking in on each other. At the end of the day, when most towns turn the lights off at 6 p.m. due to curfew, people begin texting and calling each other to confirm that everyone is alive and safe, even distant acquaintances.

I have three small children at home who are safe and can sleep in their beds every night, and get tucked in by Mama and Papa. It breaks my heart that so many Ukrainian children have had this stolen from them. Safe in Poland, but worrying about Papa fighting at home. Stuck in a bomb shelter. Or dying.

In Mariupol alone, current estimates are 5,000 civilians killed, over 200 of them children. Many have not been recovered from under the rubble, so that number will only rise. Because of my age, I have many friends in Ukraine who also have small children, and some have decided to stay. Sometimes the option to leave is more dangerous, or they do not want to leave their spouse or parents behind. Something you do not hear much in the news is that the overwhelming majority of the refugees are women with children and the elderly. All men ages 18 to 60 are required to stay. Making the decision to leave is heart-wrenching as you don’t know if you will see your family again.

Are they hopeful that a ceasefire will eventually hold and that the Russian army will withdraw?

As far as a ceasefire, frankly no. I think many Ukrainians share this view. This is a full-scale invasion, but Ukraine has been at war with Russia on a smaller scale (13,000 killed) in the east (the Donbas) since 2014. Humanitarian corridors and ceasefires are typically traps. In Mariupol, Russia agreed to a corridor and then mined the route and targeted the meeting area for artillery strikes. This is absolutely standard practice. None of the ‘rules’ of war are followed by Russia. Agreements are not adhered to. Ukrainians know this, and that’s likely a big reason why you see such a fierce will to fight and sacrifice. We know the only way to survive is to win, whatever the cost.

As far as a withdrawal, there are two options: (1) they are forced to withdraw as Ukraine is taking back its territories; (2) change of the political regime in Russia. The first scenario is certainly more likely, as many civilians in Russia choose to remain oblivious and continue being uninterested in the events in Ukraine or believe it’s all fake and a big conspiracy spearheaded by the U.S.

How will Ukraine restore its economy and infrastructure? What will be required?

The ‘Russia Will Pay’ project was created with the Kyiv School of Economics (KSE), in cooperation with the Ministry of the Economy and the Office of the President, to collect data on the damage done to Ukrainian infrastructure as a result of the Russian invasion. It is a portal that allows ordinary people to follow a straightforward algorithm and submit evidence of damage in their areas, creating a large database and thus providing a comprehensive picture of all the atrocities that happen in Ukraine. KSE has estimated that as of March 24, the infrastructure losses were $63 billion. At least 4,431 residential buildings, 92 factories/enterprises, 378 educational institutions, 138 health care facilities, eight civilian airports, 10 military airports, and seven thermal power plants/hydroelectric power plants have been damaged, destroyed, or captured in the country.

The West should be very interested in helping Ukraine out of this war as soon as possible, even simply for economic self-interest. Because Ukraine is a part of a global economy, many of its goods play a vital role in certain markets. Ukraine is one of the top exporters of wheat, sunflower oil, and corn in the world. The inability to sow and harvest this year can result in potential famine in developing countries. In addition, Ukraine is also one of the top producers of neon, which is a key component for lasers used in making computer chips. Ukraine produces 90% of semiconductor-grade neon used in the U.S. Delays in production will further exacerbate existing supply problems.

The situation with reparations is very ‘muddy.’ It is clear that Russia will not be willing to meet its obligations and pay for the damage done to Ukraine. However, because of the unprecedented scale of sanctions imposed on Russia, many countries already have control over Russia’s foreign currency holdings. Technically, holding Russian reserves will allow these countries to take control over the repayments.

In addition to the expected reparations from Russia, some individual governments have already committed to fixing certain objects of infrastructure. For example, Greece has vowed to rebuild the bombed maternity hospital in Mariupol, while Italy expressed a desire to rebuild the bombed Mariupol theater. It is estimated that about 80%-90% of Mariupol has been destroyed by Russian shelling or airstrikes with 2,300 confirmed casualties. (Many remain lying on the streets and buried in rubble unaccounted for.)

Several countries like the U.K., Germany, and the Baltics have also expressed interest in developing an international Marshall Plan for Ukraine. This idea is still very much in its development stage as there are no clear sources of financing or the mechanism of its implementation. 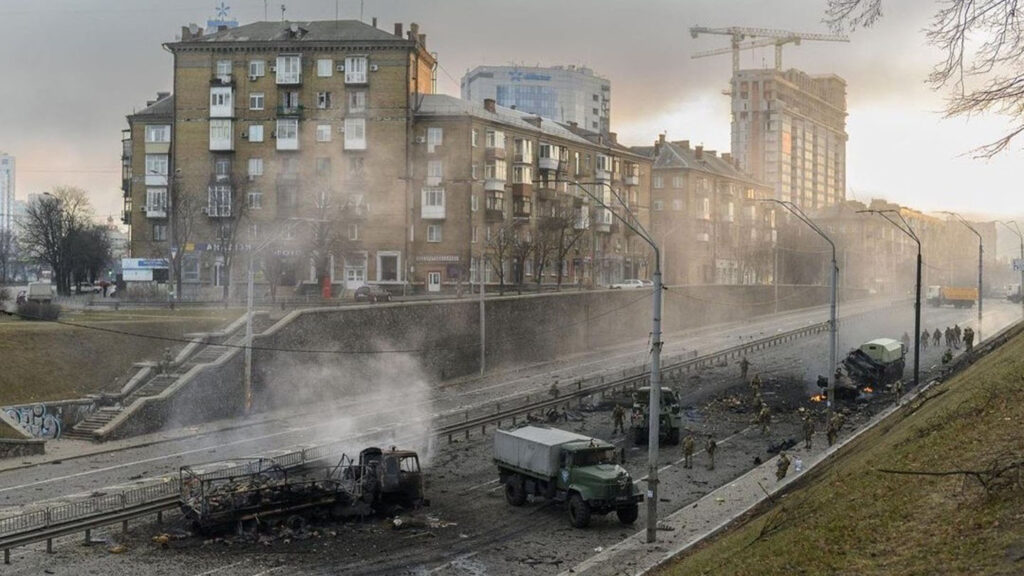 Ogrokhina shared a photo from her hometown of Kyiv. Her parents currently reside in Sumy, which is about 35 miles from the border with Russia.

What is your hope for Ukraine?

My hope for Ukraine is its continued independence and unfettered independence in the future. The Ukrainian people will not want to stay in Ukraine if it is under any sort of Russian control. The idea that Ukrainians were awaiting this liberation and were going to greet the Russian army with ‘bread and salt’ was obviously very wrong.

Unfortunately, one of the arrangements that worked back in 2014 when the war in the east of Ukraine started is not happening now. Back then, people that did not want to stay in the occupied territories were given a choice to leave. As a result, everyone who had enough resources to relocate moved to Kharkiv, Kyiv, or Dnipro. We do not see the same scenario playing out this time. While Ukraine keeps negotiating with Russia to establish a peaceful exodus of civilians from the areas that have been under heavy artillery, Russia keeps breaking its promises and simply shoots at people that try to leave.

Here is an example: In Mariupol, a besieged town that is a complete humanitarian disaster, only recently a few thousand private cars were allowed to leave, while for the majority of its population, the only way to leave the city is to be transported to Russian camps with no documents or phones. Some people have already been transported to remote cities in Russia, and their fate remains unknown.

Again, I want to reiterate, continued and unfettered independence. That’s all.

How can people help?

I am incredibly proud of the Kyiv School of Economics (KSE). They have really stepped up and taken the lead to help Ukraine. The school president, Tymofiy Mylovanov, who is the former minister of Economic Development, Trade, and Agriculture of Ukraine and an associate professor at the University of Pittsburgh, is doing a fantastic job rallying the alumni and letting the whole world know about what’s happening in Ukraine.

Their fundraising campaign is implemented in coordination with the Ukrainian government, regional and military administrations, and leading charitable organizations. KSE provides humanitarian relief such as food, transportation, refugee help, first aid, and protects kids. As of March 21, they have raised $11.8 million. Please consider donating: Donation–Kyiv School of Economics. It is tax-deductible. All donations are going toward humanitarian support, so you can disregard the ‘contribution detail’ box.

In addition to fundraising, KSE is also organizing public lectures #GlobalMinds4Ukraine, where they host discussions with leading experts in the field such as notable Nobel Prize laureates like Paul Krugman. The goal is to demonstrate solidarity with Ukraine and enhance Ukrainian intellectual sovereignty. All past recorded lectures are posted on their Facebook page.

The resolve of the Ukrainian people is inspiring. What’s behind that toughness?

Standard Slavic toughness coupled with motivation powered by love. Love of family, freedom, and country. We are fighting for our freedom and defending our right to exist. Ukraine has been working to defend against Russia since 2014, and that motivation I mentioned has helped us to build up our army with modern equipment and proper training. The Russian army, on the other hand, is very unmotivated and corrupt. Their training is subpar, and the equipment is outdated. Its soldiers are treated as disposable, as they lie by the thousands in Ukrainian fields.

Event provided students, faculty, staff a chance to come together and show solidarity

See photos from the event
Categorized in: Economics, Faculty and Staff, Featured News, News and Features