'Writing brings comfort to me and is an integral part of my life,' says Alex Thurtle ’24, winner of the Jean E. Corrie Poetry Prize competition Twitter

This year’s prizes were selected by guest judge and featured reader Paul Tran, a visiting faculty in poetry at Pacific University MFA in Writing and a Wallace Stegner Fellow in Poetry at Stanford University. Tran was the first Asian American since 1993—and first transgender poet ever—to win the Nuyorican Poets Café Grand Slam. 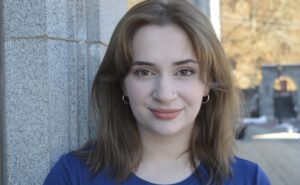 Thurtle, an English and theater double major, who has taken Introduction to Creative Writing with Jennifer Gilmore and Fiction Writing Workshop with Mikael Awake, which she described as “transformative,” had been recently focused on academic writing.

“The timing for the contest was spot on,” Thurtle says. “Writing brings comfort to me and is an integral part of my life. That was especially the case during the pandemic. But I had taken a break, feeling a bit burned out and less than creative and focusing instead on academic writing. I then saw a poem on TikTok that inspired me to start writing again.”

Her poem might seem a bit, as she describes it, “teenage angsty with someone not liking you back,” but she is exploring the concepts of reality and abstraction.

“Actors ask us to suspend our disbelief and accept something that is not real. I can struggle with those concepts, feeling emotions in the moment that keep me present to a person and reciprocating with similar emotions,” she says. “Later I realize that I need to unconvince myself that those emotions were real, and rather than linger on them and process those emotions, I just have to move forward.” 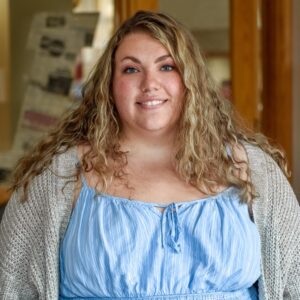 Marriott, an English major with a concentration in creative writing, was motivated by the contest and began to work on her poem a few weeks prior to the deadline.

Marriott is clear that a few details in the poem can be drawn from her childhood, like her family’s love of hockey, but the relationships, events, and dynamics in her poem are not autobiographical.

“I wanted to explore how complex family relationships can be, especially the two sides—love and resentment—of how men are raised,” says Marriott. “The poem’s core is about society and masculinity in general.”

Both students were honored to be recognized and expect this accomplishment to spur them to pursue writing careers.

“This was a surprise,” says Thurtle. “For Paul to appreciate my work is humbling and amazing. I am honored.”

At the event, both read their poems in front of professors, peers, and friends (and maybe an unrequited love).

The Jean E. Corrie Poetry Prize, awarded annually, was established in 1989. The Corrie Prize is held under the auspices of the Academy of American Poets with prizes awarded at more than 200 colleges and universities across the United States.

the curse of a realist
Alex Thurtle ’24

the tiaras never shimmered as much as i desired,

the weight of their cheap plastic never lightened the heaviness of tomorrow and yesterday;

the feather boas always shed their pieces much too fast.

i could not bring myself to imagine a world where the props meant something.

the curse of a realist is a heavy one

because i never learned to look beyond the things i could

but, when i did believe in something, i could not stop.

that made it even harder to pretend that we never were something.

how do i pretend to forget the nights we spent debating

philosophy and religion and heaviness and love and lust and death and hurt and pain and us.

like a toddler clinging to their mother in a grocery store.

how do i pretend that your touch did not

set wildfires along my palms and forearms and chest.

i must learn to pretend.

A Man Is Born
Madeline Marriott ’24

By age four, he will know how to cheat in battleship.

He will never be allowed to win a game he didn’t earn,

because that doesn’t teach him anything,

and when he is nine, and beats his grandfather in chess for the first time,

he will get a handshake and a clap on the back,

and his grandfather will cry, hidden by the dark, as he lies in bed that night.

When he is seven, he will learn to yell with his teeth gritted,

with his lips barely parted, with his face red and contorted.

He will first be its victim, then he’ll weaponize it for himself.

When he is ten, he will learn to follow the hockey puck on tv with ease,

and the ice will reflect white and dazzling in his eyes.

When his father takes him to his first game that year,

he will model his posture in the blue plastic chair,

hunched forward, elbows on his knees, tapping his foot.

He will learn about the 60s, the Broad Street Bullies, the electricity of it all.

He will be nostalgic for it though he never saw it.

When he is sixteen, his father will make him cut off all of his hair

when it inches too close to his shoulders.

He will want to cry, but he won’t.

His father thinks he will understand one day, but he won’t,

not even when he has kids of his own.

As he grows, he will learn about the men that formed him,

the bricklayers and firefighters,

the exhausted, the angry, the proud, the selfless,

He will love his father, he will hate him.