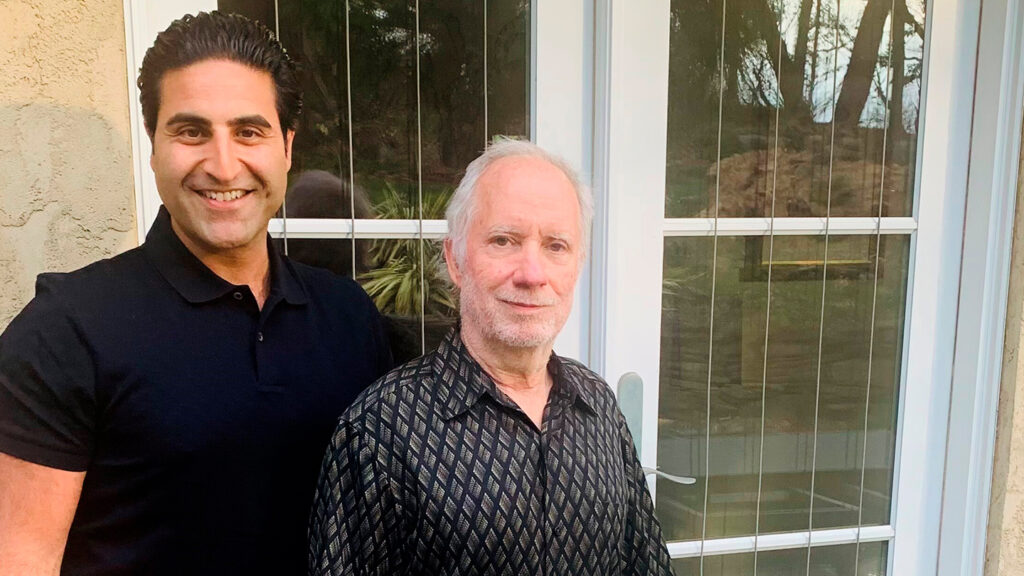 The hollow thud of a bird flying into a window or glass door is a dreadful, heart-sinking sound, but members of the Acopian family have been on a mission for decades to address one of the main causes of avian mortality.

Surrounded by the soothing sights and sounds of cardinals, wrens, woodpeckers, and other varieties of birds around his home on a wooded hilltop in Palmer Township, Jeff Acopian ’75 says his family’s very simple, easily installed system has been saving birds around the world since the mid-1980s.

“Back in the late ’70s, we were feeding the birds here, and they kept flying into our windows and dying,” Acopian recalls. “And it really bummed us all out.”

Acopian and his family of Lafayette alumni have helped transform Lafayette’s engineering programs. His father, Sarkis Acopian ’51, graduated from Lafayette with a degree in mechanical engineering. He founded the Acopian Technical Co. in 1957, a manufacturer of electronic power supplies headquartered in Easton, with manufacturing facilities in both Easton and Melbourne, Fla. Sarkis and his wife, Bobbye, made a generous gift to Lafayette that resulted in a complete renovation of the 90,000-square-foot Acopian Engineering Center, which was dedicated in 2003.

A naturalist as well as a mechanical engineer, Sarkis Acopian began searching for a solution to the bird problem, first trying by hanging curtain beads that were popular in the 1970s. He took the individual bead strings apart and rehung them about every 4 inches in front of the offending windows.

“He had remarkable success on the first try, but the rooms faintly resembled those of a hippie pad with those beads hanging on the outside of the windows,” Jeff Acopian says. “He then tried bamboo rods to prevent birds from striking windows, but although very effective, they were unsightly. Finally, paracord was used for installing BirdSavers, and they not only worked, but looked great.”

Birds hit glass surfaces because they fly into what they perceive to be real trees or shrubs that are reflected by the glass. Birds also cannot detect the transparency of glass and sometimes try to fly toward what is beyond the glass.

Swaying gently and soothingly in the wind in front of windows, Acopian BirdSavers hang at 4-inch intervals and break up and distort the reflection, causing the birds to change course.

“That’s really all it is,” Acopian says, noting that the BirdSavers can be purchased from BirdSavers.com or made on your own with instructions available on the website. “Long story short, it works and looks good.”

For the Acopian family, the product is more about saving birds than making money.

“This is a passion project, not a profit project. Jeff prefers that people make their own BirdSavers following the instructions on the website,” Karapetian adds. “But, obviously, he’s realistic, and he knows that some people either can’t or don’t want to make them or don’t have the time, so he will make them for you.”

Besides saving birds from window strikes, the system, also known as Zen Window Curtains, has other benefits.

“People have coined the term because it gives you this Zen vibe, especially when the wind blows and the cords gracefully sway,” Acopian says. “It’s very calming.”

Acopian says his BirdSavers system is more important than ever, with bird populations having dropped by more than 30% worldwide since the 1990s as a result of loss of habitat and window strikes.

“Have you ever heard a bird hit a window? It’s an awful sound,” he says. “When the pandemic hit and everybody was staying home, I got so many calls from people because they were home working and would hear birds hitting glass windows and doors. If you think about the fact that one bird hits somebody’s house, which is not a rare occurrence, then consider all the houses and windows in the country, you begin to become sensitive to the problem.”

As people become more aware of the plight of avian populations, awareness of Acopian BirdSavers is expanding.

“Dwindling bird populations have become a huge problem,” Karapetian says. “So more and more people are getting more in tune with this. They want to find solutions to help. And this is the most cost-effective solution, and the one that looks the best, and it’s very easy to do—instructions are right on the website. It just makes Jeff’s product so much more special. I’m not just saying that because I’m family.”

DIY Acopian BirdSavers: How to Stop the Thuds

Sarkis Acopian ’51 founded the Acopian Center for the Environment, a research center of the American University of Armenia (AUA), that promotes the protection and restoration of the natural environment through research, education, and community outreach in partnership with his son, Jeff Acopian ’75, and Jeff’s wife, Helen.

Sarkis Acopian assembled a team of ornithologists from around the world to work toward publishing a field guide on the birds of Armenia in hopes of introducing the newly independent former Soviet republic to the idea of environmental conservation. As a result of the project, A Field Guide to Birds of Armenia was published, along with the first accurate map of the newly created Republic of Armenia.

Established the Acopian Center for Conservation Learning at Hawk Mountain Sanctuary in Kempton, Pa., a global leader in raptor conservation.

Established the Acopian Center for Ornithology at Muhlenberg College.