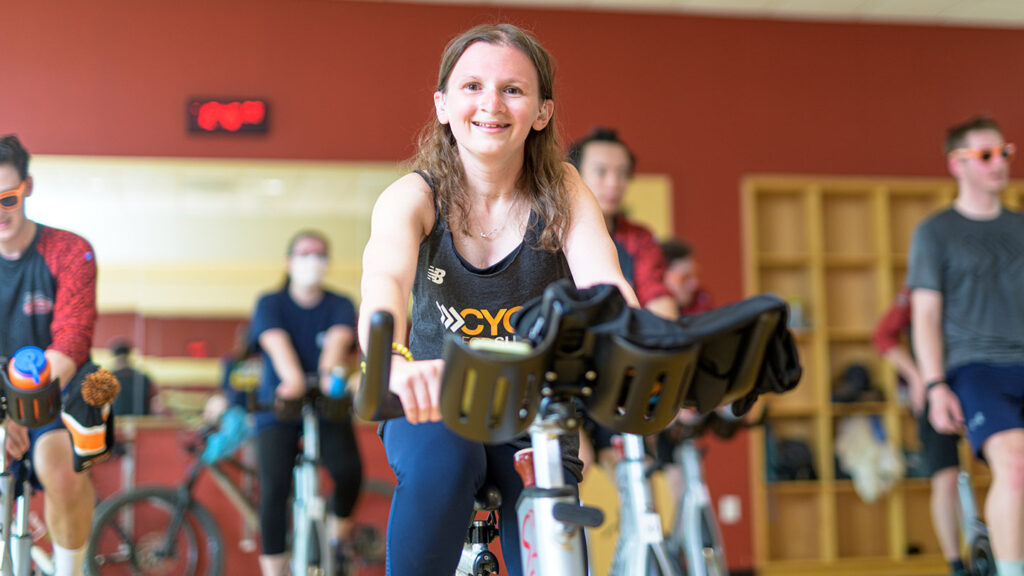 The College community came together on a recent Saturday to support Perry Zimmerman ’23 and her Cycling for Survival fundraiser event. Zimmerman, a five-time cancer survivor, has been participating in Memorial Sloan Kettering’s annual indoor cycling event since 2009.

“As a five-time cancer survivor, I have seen firsthand the havoc mainline treatments wreak on your body while killing the cancer cells,” says Zimmerman, a philosophy major with a religious studies minor. “I have also seen treatment options diminish for me with each new diagnosis because I have already surpassed the lifetime limit of many chemotherapy drugs. I raise money for research at Memorial Sloan Kettering through Cycle for Survival in hopes that one day there will be more treatment options that are easier on the patient physically and mentally.”

“Having everyone come together was amazing,” Zimmerman says. “I was so happy with the turnout; we filled every bike both hours, and the energy was amazing. My mom and one of my friends here at Lafayette convinced me to reach out to President Hurd and let her know it was happening. When she showed up, I was about to burst with excitement. I love her eagerness to support students in their endeavors here, and having her stop by the event and meet my parents made the day even more special.”

If you are interested in contributing to Team Perry, visit Zimmerman’s fundraising page.