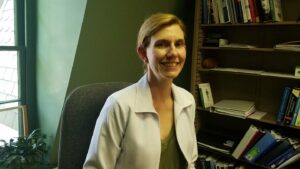 During an April 29 appearance on NPR’s Marketplace, Julie Smith, professor of economics, offered her views on why the Personal Consumption Expenditures (PCE) price index is the Federal Reserve’s preferred inflation gauge.

“The PCE uses a basket of what we actually buy every month because it’s based on our consumer spending,” Smith, who appeared on Marketplace four times last academic year, told program host Kai Ryssdal. “It allows us to do what we all do when we go to the grocery store. We say, ‘Oh, these oranges have gotten more expensive, so maybe I’ll buy grapefruit.’ ”

The Federal Reserve prefers the PCE over the Consumer Price Index because it’s a broader and timelier measure of consumer behavior, Smith said.

Listen to the segment.