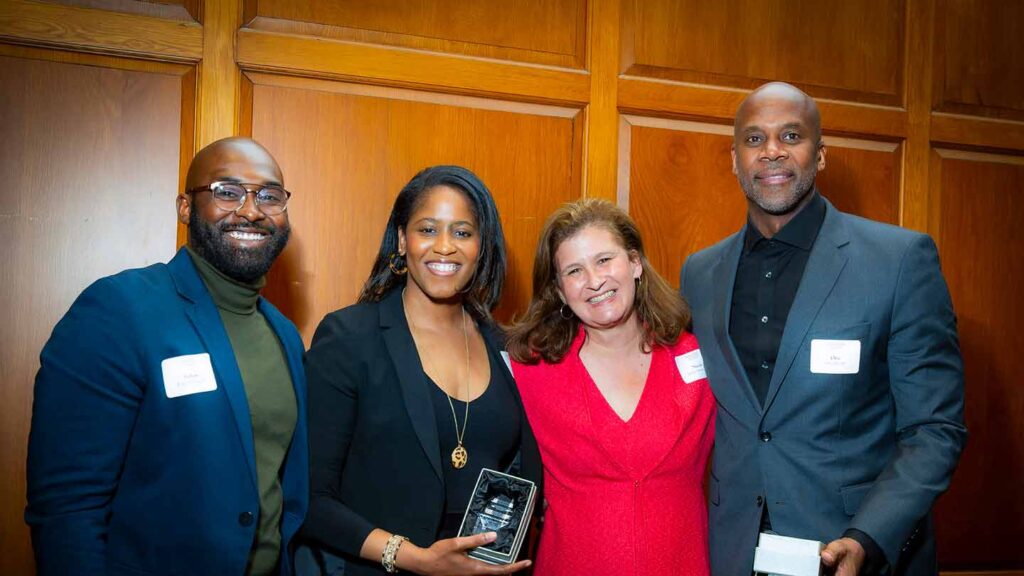 Students were honored for their dedication to academics and furthering diversity on campus and in the surrounding community at the annual McDonogh Awards held April 23 in Marquis Hall. Sponsored by the Office of Intercultural Development, the ceremony celebrates students who have committed themselves to addressing issues of multiculturalism, diversity, and social justice throughout the year.

Both the awards ceremony and the alumni network are named in honor of David and Washington McDonogh, early African American attendees of Lafayette College (1838-1844). The McDonogh Awards are presented in eight categories and are named after prominent Black and African American alumni who were known as leaders during their tenure at Lafayette College.

Following a welcome and update from Ryan Benjamin ’10, co-chair of McDonogh Network, President Nicole Farmer Hurd spoke about the importance of community.

“I believe we need to see and hear and value each other. To the students in the room, thank you for how you show up every day. Thank you for the inspiration that you bring to this room,” said Hurd during her remarks. “I am very excited about what’s going on with the McDonogh Network. As you all know, I live next door to the new Portlock Center. I am very aware that we need spaces that we can see ourselves in and where we can see ourselves as leaders.”

Keynote speakers and fellow educators Rexford Ahene, recently retired professor of economics, and Harrison Bailey ’95, principal of Liberty High School, discussed the power of mentorship and the evolution of supporting students of color at Lafayette. 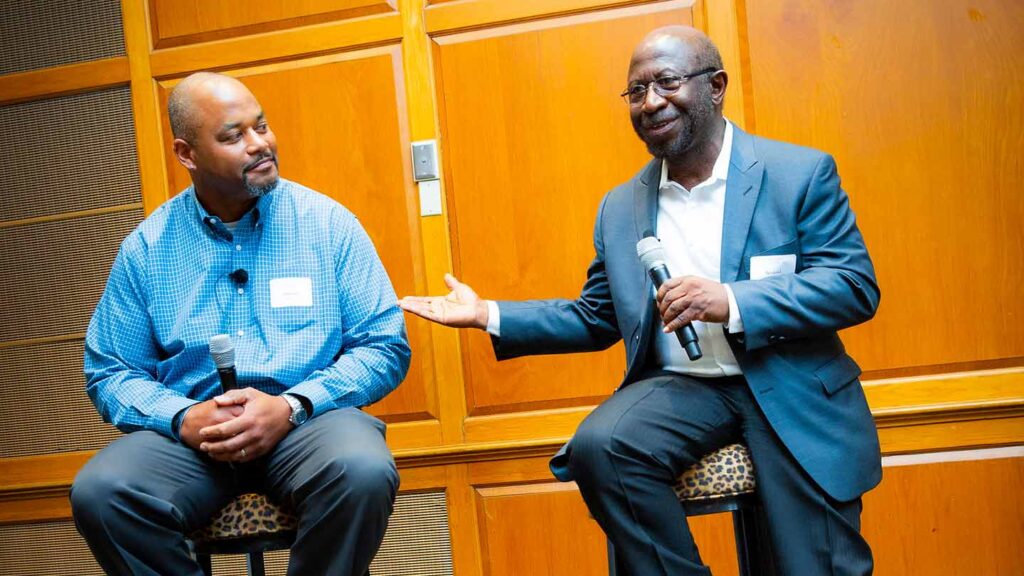 Harrison Bailey ’95 and Rexford Ahene, professor of economics, discuss the importance of mentoring at the McDonogh Awards in April.

“What is mentoring really? I think it is a process of guiding somebody to realize their full potential and to be better than their original self,” said Ahene, who was the first professor of color to be hired at Lafayette 40 years ago. “You have to know your students, and understand your challenges and be able to share your own vulnerabilities with them. And be willing to help them find a way and a solution that they themselves discover.”

Bailey spoke about his Lafayette experience as a student and how Gladstone “Fluney” Hutchinson, associate professor of economics, inspired him to pursue a master’s degree.

“Probably the most impactful moment that changed my life in terms of mentorship was during my senior year,” explained Bailey. “I was intending to play football and pursue public speaking. Fluney said, ‘You need to go to graduate school.’ I was lucky enough to play arena football but while I was playing, I applied to graduate school at Lehigh, and I got in. That type of mentorship, to be present on campus … to sit us down and have hard conversations and know that we can trust in what you were telling us changed my life,” said Bailey.

The luncheon concluded with recognition of this year’s scholars who demonstrated a commitment to academics and furthering diversity. The honorees included:

Darlyne Bailey ’74 Excellence in the Humanities and Social Sciences Award – Presented to a student whose academic/artistic accomplishments reflect an outstanding level of scholarship and has advanced understanding of an important issue related to diversity.

Dr. Eugene DeLoatch ’59 Excellence in Science and Engineering Award – Presented to a senior in the natural sciences or engineering whose academic accomplishments reflect an outstanding level of scholarship.

Otis Ellis ’89 Scholar-Athlete Award – Presented to a successful varsity athlete who has achieved an outstanding level of scholarship.

Riley Temple ’71 Creative and Artistic Citizenship Award – Presented to a student whose creative scholarship in the visual and/or performing arts contributes to knowledge on societal issues of multicultural concern.

Leroy Nunery ’77 Intellectual Citizenship Award – Presented to a student whose research on important social, political, or economic issues advances knowledge and involves the student in activities within a community.

Jeffrey Robinson ’80 Leadership Award – Awarded to an accomplished student who is also characterized by noteworthy leadership in college activities and student life.

David A. Portlock Cross-Cultural Relations Award – Presented to a student who has worked diligently to promote cross-cultural relationships on campus and/or the community.