Bringing with them a wealth of history and competition, the Lafayette women’s crew club—including three seniors who missed Commencement to participate—made their presence felt in a big way at the American Collegiate Rowing Association (ACRA) National Championship Regatta. Rowing on what is appropriately named the Clinch River in Oak Ridge, Tenn., the ladies clinched the gold medal in the 17H1 Women’s Varsity 4+ Grand Final with a time of 7:30.119.

Coached by Rick Kelliher and Derek Richmond, the ACRA rowers included Elizabeth Good ’22, Erika Nally ’22, Haley Simpson ’22, Abby Hammel ’23, and Lauren Salbinski ’23. Deciding to enter the race just weeks prior to the event, the three seniors felt that four years of rowing together gave them the competitive edge they needed to prevail. 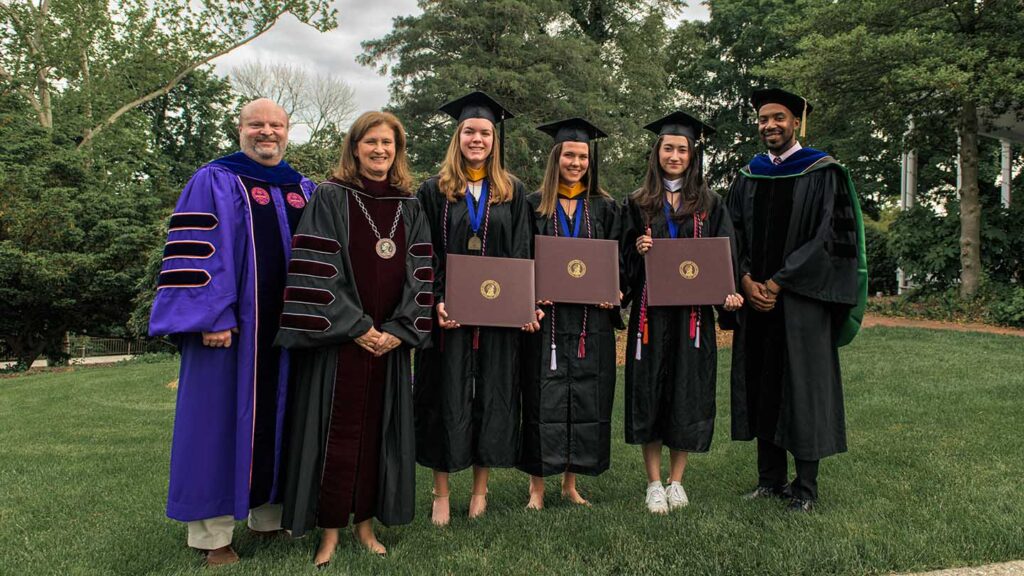 On May 24, the seniors celebrated Commencement with family members at President Nicole Farmer Hurd’s home. See more images below.

“We were in the same novice boat that did really well during our freshmen year, so it really set the stage for the next four years. That first year, it was all about getting the fitness and technical stuff down, and building up the stamina needed for rowing,” shared Good.

“Junior and senior year, it was about getting in the meters and rowing as much as we could. We would wake up at 5:30 a.m. three times a week, and then be in the gym at 4 p.m. It was a normal routine, and because we were seeing results, we knew what we had to do to go out and win,” said Nally. We really locked in over the summer before senior year, and our coach gave us a training plan to follow. Once we got the lineup with our two junior teammates, our cohesion really set us apart from other teams.”

The win also came just a week after both the women’s (Novice 4, JV4, and Varsity 4) and men’s (Novice 4) teams dominated at the Dad Vail Regatta against Division I varsity programs. The women walked away from the Dad Vail with one bronze and two gold medals, which was enough to rank them third in overall team points. The last several weeks of competition have capped off a memorable year—and a chance for the seniors to finish their Lafayette careers on top. They also give plenty of credit to their junior teammates.

“A big key to our success was the dedication from all five of us. Everyone was willing to come to practice everyday no matter what else we had going on,” said Simpson. “We trained in pairs and eights as well as the four. There’s a lot of technical things that go into rowing besides physical fitness.”

And aside from the wins themselves, the group experienced several special moments together that proved to be the icing on the cake: The juniors decorating their shared Airbnb to congratulate the seniors on all of their achievements, and the second-place-finishing team from Bowdoin College rushing to congratulate them before they even exited their boat. 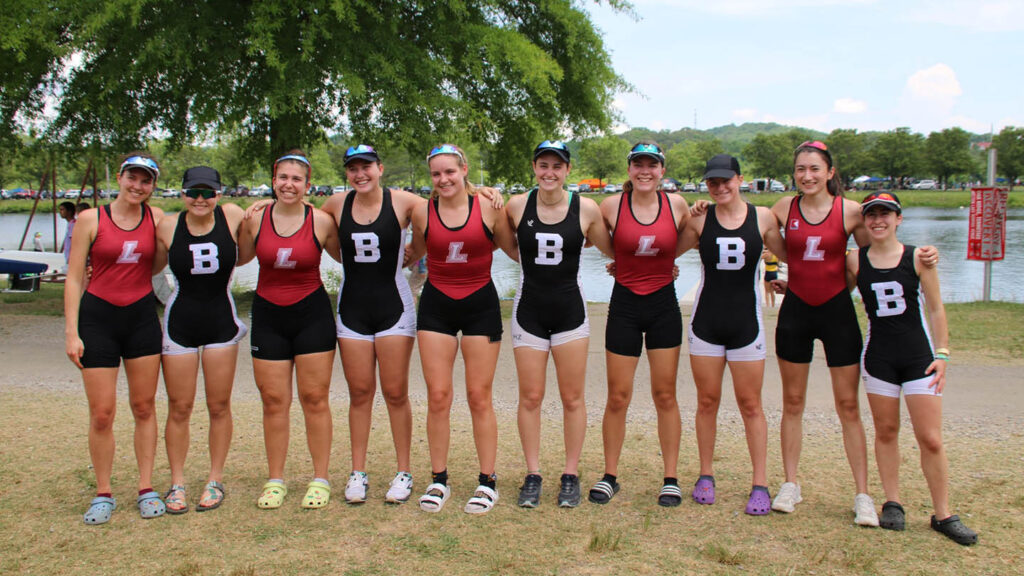 Rivals from Bowdoin College congratulated Lafayette on their win

“The whole atmosphere was so supportive and respectful,” noted Simpson. “It was just kind of wholesome, which is something that you don’t really get at other regattas.”

Following their whirlwind trip, the group arrived home to one more wholesome moment: The seniors and their families attending a special Commencement ceremony at the home of President Nicole Farmer Hurd, with remarks being given that night by Annette Diorio, vice president of Campus Life.

“For all of us, rowing was such a big part of our time at Lafayette,” Good said. “This seemed like the perfect way to end our four years here.”

“Winning a national championship was the perfect way to end the season,” said Kelliher. “The athletes and their families were so appreciative of President Hurd presenting the graduating seniors with their diplomas, as well.”