Smiles, laughter, and hugs were plentiful as alumni returned to Lafayette for Reunion 2022 Twitter

More than 1,400 Lafayette alumni were welcomed home to College Hill June 2-12 to enjoy receptions, socials, dancing, the annual campus parade, and much more during Reunion. This year, four reunion celebrations took place to allow those classes that were not able to assemble over the past two years, due to the pandemic, to reunite. Alumni celebrating their 55th through 65th reunions, 45th through 15th, 50th, and young alumni celebrating their 10th and fifth reunions returned to campus.

The celebrations kicked off on Thursday, June 2 with a special dinner in Marquis Hall to honor alumni who graced the halls on campus more than a half-century ago. Longtime friends W. Thomas Grimm ’61 and Doug Hobby ’61 had not returned to campus since their 55th reunion six years earlier. They shared fond memories of favorite professors in government and law and industrial engineering (their majors, respectively), softball games, and other highlights of their time on College Hill. Smiles crossed their faces as they mentioned several professors including Joseph Tarbell, Charlie Merrick, Professor Thomas, and more. 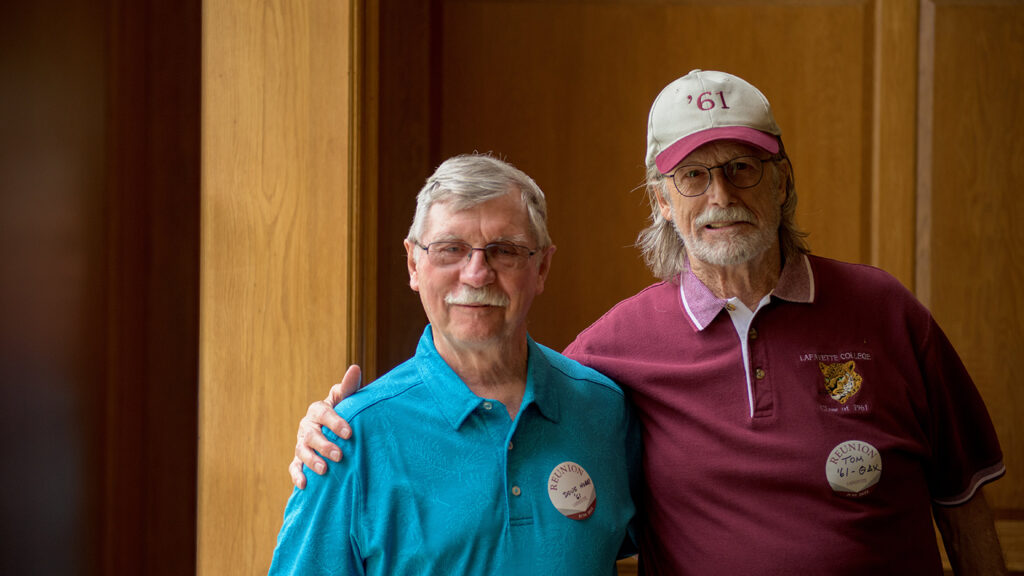 “My favorite professor was Woody Howard, who taught Constitutional Law,” said Grimm. “He really challenged me. He gave me an 85 in the class, and I went into his office to challenge the grade and luckily he changed it to a 90.”

Former baseball player Walter Manuel ’66 P’92 P’96 chose Lafayette over Princeton due to the College’s successful baseball program and the fact that he knew Lafayette’s baseball coach, Charlie Gelbert, who, Manuel explains, was quite superstitious.

“During my junior year we went to the College World Series, and we came in seventh in the country! Halfway through the season we were playing a game at Gettysburg and we were down. Charlie threw ALL the bats on the field. The umpire said, ‘Charlie, what are you doing?’ And Charlie said, ‘We are NOT hitting the ball, and I am waking these bats up!’”

At the Alumni Association reception later that evening, the passing of the gavel took place between outgoing Alumni Association Board President Tracy Hagert Sutka ’82 P’17 and incoming president Michael Weisburger ’82. Sutka’s plans to attract more alumni to help raise awareness about Lafayette’s position as a top-tier liberal arts school were not waived for the pandemic. Never one to step down from a challenge, Sutka leveraged Zoom and other opportunities to engage alumni and encourage volunteerism and support the College.

“For the past two years, Alumni Relations was able to quickly pivot to provide virtual events to keep alumni engaged: from alumni and faculty guest speakers to hugely attended social events like the virtual reunions in 2020 and 2021, and a New York holiday party,” explained Sutka. “I’m thrilled that my term ended with the return of the Class of 2020 for their in-person Commencement and with June reunions that brought so many alumni back home.”

Longtime volunteer and Lafayette advocate Weisburger, aka “Weissy”, is looking forward to his next two years as president. Weissy knows a thing or two about alumni engagement. Not only has he served as vice president of the Alumni Association Board for the last year, but his family legacy runs deep (Weisburger’s father, Mark Weisburger ’55, is a trustee emeritus and also served as president of the Alumni Association 1975-76.) In 2014, Weissy and his wife, Jenny ’82, drove a Lafayette-themed airstream across the country in support of the 150th Rivalry football game.

“I’m incredibly honored to have been elected to this position. The new structure of our Alumni Association Board reflects our ongoing commitment of having alumni volunteers directly involved in the future of Lafayette,” explained Weisburger. “Our role in working with President Hurd to realize her vision will be as important as it’s ever been. To that end, we have an incredible group of committed alums and Lafayette staff ready to get the job done.”

A special groundbreaking took place June 3 to commemorate a new plaza to be located near the Civil War monument at the top of the hill. Spearheaded by Jeff Ruthizer ’62 P’00 and class fund manager John Weis ’62, the plaza, once constructed, will honor the Class of 1962 who celebrated their 60th Reunion this year. Remarks were presented by President Nicole Farmer Hurd, Rico Reyes, director of galleries and curator of collections, Julia Greeley ’25, and Ruthizer during the event that was also attended by Easton Mayor Sal Panto.

Ruthizer and Weiss spearheaded discussions in 2020 to identify a fundraising project that would honor their class, and the plaza was at the top of their list.

“We are so glad to be here today to break ground for what will be a fabulous plaza, the gateway to the College campus, up this hill,” said Ruthizer. “This plaza will be the bookend to what begins down the hill at the Class of 1926 arch.”

Listening, Learning, and the Road Ahead

From garden receptions at the President’s House to question-and-answer sessions, President Nicole Farmer Hurd was out and about throughout Reunion speaking with alumni about her vision for Lafayette and reflecting on her first year on College Hill. Specifically, two “Conversations with President Hurd” took place to provide alumni the opportunity to speak with the president directly and ask questions.

“It’s time for us to put a stake in the ground and say, ‘This is who we are. We’re not apologizing for it. And we’re going to be the best at it.’ So that’s what the next 12 to 24 months feel like to me,” explained President Hurd during the event June 4. “We need to do some infrastructure investment. We need to get clear on who we are, and then we need to unapologetically lean into it. Because like I said, there’s so much goodness, and there’s so much potential. I say this to the team all the time. Clear is kind. It is unkind when we try to do everything. It’s unkind when we aren’t ready to say this is who Lafayette is, and we’re going to be the best at it. And so again, I need your help because we need to fine tune what those two, three, four strands are that we’re going to absolutely rock, and then we need to lean in together.” 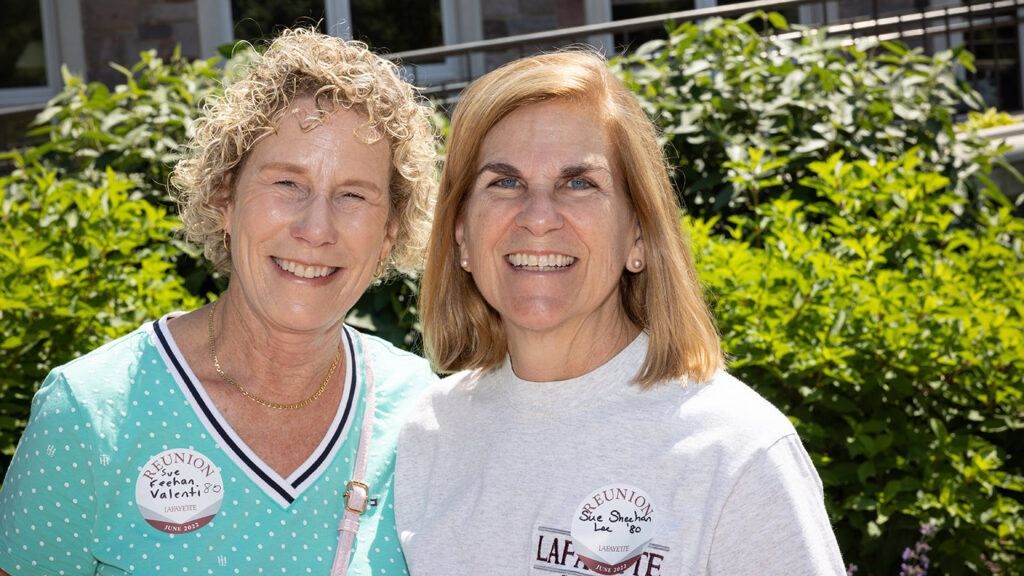 Sue Feehan Valenti ’80 and Sue Sheehan Lee ’80 attended the session and were grateful to learn more about the direction of the College from President Hurd.

“I think President Hurd gets what Lafayette is all about and understands that it’s a really special place. She appreciates it,” said Valenti.

Climbing the Hill, Together

“When I’ve spoken to other ADs about this changing landscape, they have used phrases like ‘hot mess,’ ‘rudderless leadership,’ and ‘erosion of the good that is college athletics,’” said Freeman during her opening remarks. “One of the things that I get energized about is that what we do here at Lafayette is NOT that. We are what’s good about college athletics. I believe that wholeheartedly, and I think my colleagues who are up here agree.“

Back on the Quad

Whether alums were parading through campus, singing on the steps of Pardee Hall and sharing their favorite Pardee memories, joining a class social, and more, one thing is certain—there was a common phrase heard on the Quad throughout the four reunion events that took place: “It’s good to be back!”

In fact, economics and business major John Mulcahy ’87 has returned to campus several times for Reunions in the past but was thoroughly impressed this time, not only by the beautiful campus and connections with classmates, but by President Hurd.

“I just love her vision for the College, and her personality and humility, which is very evident. There was a point she made, which was the use of that word ‘and’ and the fact that it can be engineering and liberal arts; it can be the College and the community; it can be first-generation students and legacy students. I think that is really what helps to bring an overall community together.”

Of the many Pardee Hall memories shared over the last two weeks, (alumni posted their memories on a bulletin board in Pardee), one of the most touching was from a young alumnus, A. Porter ’06 who wrote about his fondest memory: “Tuesday and Thursday night Spanish class and how often everyone arrived drenched from a thunderstorm. All of our books were water damaged. It built a community.”

To learn more about alumni events planned in your area, visit LeopardLink. Remember to share your story using the online Class Notes feature so it can appear in the next Lafayette magazine.

View all photos from Reunion on Flikr.