In early 2020, just before COVID-19 changed everything in higher education for the better part of a year, Lafayette’s Foreign Languages and Literatures French program was expanding on a then-two-year-old pilot partnership with the French Heritage Language Program (FHLP). Made possible through the French-American Cultural Exchange in Education and the Arts (FACE) Foundation, FHLP was designed to provide needed support to young Francophone students who are new to the United States.

The Lafayette Friendship Partnership (PALS) program, organized by Mary Toulouse, director of Lafayette’s Foreign Languages and Literatures Resource Center, and Olga Anna Duhl, Oliver E. Williams Professor of Languages and professor of French, initially held a retreat at Lafayette for students from Haiti, Mali, Senegal, and Guinea, giving them the opportunity to connect firsthand with Lafayette students who could introduce them to college life and American culture. Then, the world shut down. 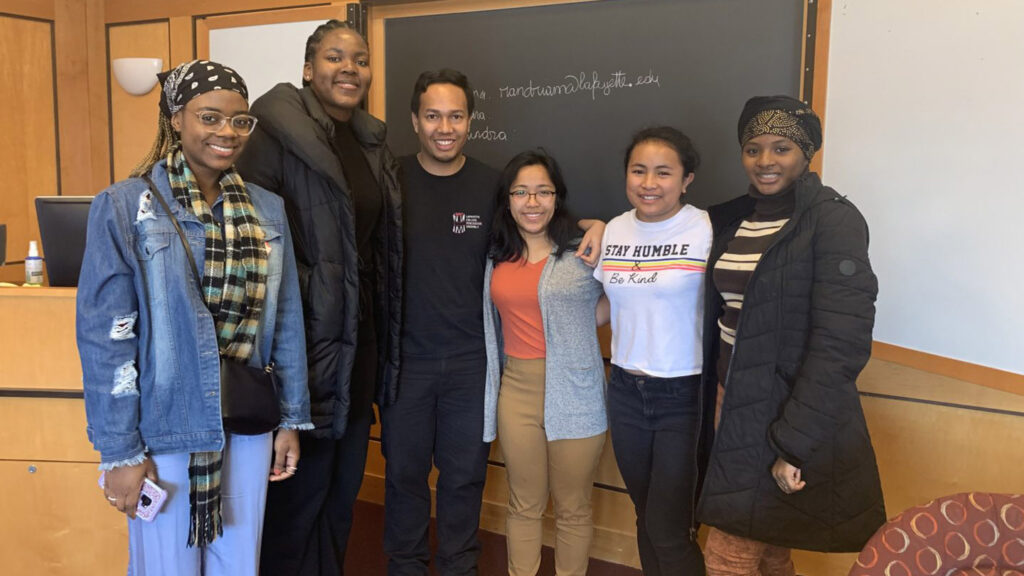 “We managed to get past those bumps of COVID and keep this program going with a certain amount of passion,” Toulouse says with a smile. “Then Agnes (Ndiaye-Tounkara, program director of FHLP) came and visited, and spoke to us about how important it is to have this kind of dual language program for young people who are bilingual. For our (2022) graduating seniors, they built this program with us over the last four years, and many of them have such wonderful memories they’re taking away from this program.”

As everything shifted to a virtual world to keep moving, so, too, did the PALS program, which allowed a dozen FHLP students in grades 10, 11, and 12 to pair with Lafayette students and meet and communicate regularly via Zoom, Google Meet, texts, and emails. The interactions not only helped the high school students prepare for SAT tests and work on college essays, but also helped them navigate how the college admissions process works in America.

And, most importantly, they allowed the students to form a bond and feel like they had someone in their corner who knew exactly what they were going through—forging a connection between mentors and mentees who otherwise may never have met.

“Some of the small things that we said and did with them may have a really big impact, which we don’t always really think about in the moment. We’ve all gone through the college process, and growing up in the U.S., I was very accustomed to it. My high school had so many resources, but these Francophone students didn’t have that,” Madison Cass ’22 points out. “I was tutoring my student for SAT prep, and we started seeing the same sorts of patterns in the problems that she was having trouble with. We had multiple lightbulb moments together, and that was so exciting. I’ll remember those moments for a long time.”

“I’ve been working with a young man named Elijah, who is in grade 11, and it’s been so cool to see how motivated he is,” echoes Riley Dowd ’22. “He’s texted me multiple times a week to organize meetings and puts in so much effort. We worked together on a common application essay, and he was sending me all of these other essays he was reading. It’s been inspiring to me, because the little bit of time I spent researching colleges for him was so much more helpful to him than I thought it would be.”

Giving the Francophone students unique access to an institution like Lafayette, which may have otherwise seemed out of reach, will hopefully help them see what viable options they have for their academic futures. Allowing them to feel seen, heard, and supported is also a key piece of the partnership—one that wouldn’t be possible without the joint work between Foreign Languages and the Landis Center for Community Engagement.

“It’s really an outreach program, and we’re very proud of that. I’m also very proud of the fact that the faculty recently voted that our department will no longer be known as ‘Foreign Languages and Literatures,’ but will be known as ‘Foreign Languages and Literary Studies.’ It’s a great achievement and reflects on the outreach program and bilingualism being crucial to the program,” says Duhl. “We want these Francophone students to become global citizens to appreciate their own heritage while learning how to integrate into American society and higher education.”

Despite graduating this year, all of the 2022 Lafayette seniors who were part of the program, including Tafita Rakotozandry ’22 and Naomi Ganpo-Nkwenkwa ’22, plan to keep in touch with their Francophone mentees and follow their chosen paths. And the program will continue to forge ahead, with support from students like Narindra Andrisoamampianina ’23, who hails from Madagascar and has always utilized French as one of her main languages.

“We all come from underdeveloped countries, and the Francophone students are in the process of applying to colleges without having the same background as most of the domestic students here in the U.S.,” she says. “Having this kind of similar background with the students makes me think of how I felt in the past, and I’m really thankful that I’m able to help them.”