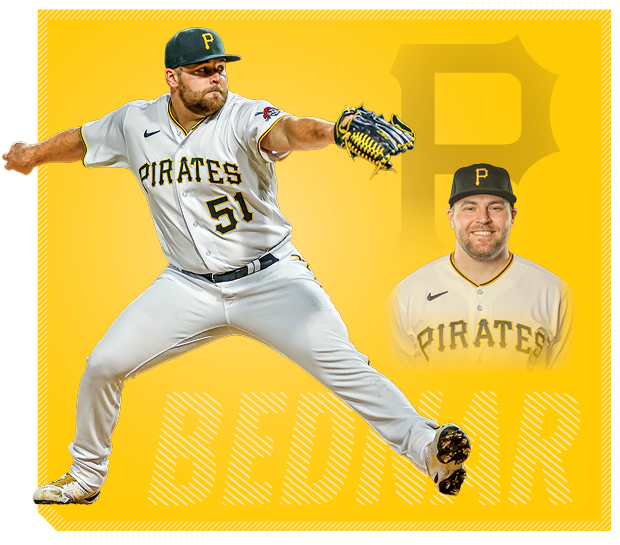 In summer 2016, David Bednar ’17 tried to hide his phone behind his glove during batting practice in his second game with the Cape Cod Baseball League—a common stop for collegiate prospects aiming for the majors. If he’d been caught, his teammates would understand though. It was day three of the MLB draft, and a scout had told him to pay attention to his phone. He couldn’t stop hitting refresh.

Instead, the news came over the loudspeaker of the small stadium before the first pitch. He’d been selected by the San Diego Padres as the 1,044th pick in the 35th round. He was on a plane a few hours later, headed to the Tri-City Dust Devils in Pasco, Wash., the next rung on the long, grueling climb to professional baseball.

Tell a first-year Bednar at Lafayette College in 2013 that he was bound, eight years later, to become one of the best relief pitchers in all of Major League Baseball and, “I absolutely would not have believed you,” he says. “To say MLB would be priority No. 1 when I first stepped on campus would be a stretch.”

Yet, he has become one of the most reliable closers in the country with the Pittsburgh Pirates, earning an ERA under 2.5. In July, he was named to the National League squad for the 2022 MLB All-Star game.

Bednar spent three years on campus, splitting time on the mound while studying chemical engineering before switching to economics. Not until the start of his junior season did coaches and scouts tell him he had a shot at the next level, but even getting drafted brings little guarantee of a big league appearance.

For three years, Bednar ground through various minor league teams, honing his skills as a relief pitcher. On Aug. 31, 2019, before his next game with the Double-A Amarillo Sod Poodles, the manager called a team meeting to announce that one of his teammates was being called up.

“Then the manager paused, and said ‘Oh, and Bednar, you’re going up with him,’” he remembers. “The whole team went crazy. It was a surreal moment.”

At 6:45 a.m. the next day, he took a flight from Amarillo to San Francisco, where the Padres had a game against the Giants. By 12 p.m., he was warming up at the stadium. In the ninth inning, the bullpen got the call, and he jogged onto an MLB outfield as a professional player for the first time.

“You take mental snapshots and try to enjoy it because you know what it took to get here,” Bednar says on his emotions jogging onto the field. “Then you get to the mound, and your mindset switches. That’s over now. Now it’s time to go to work.”

His first inning in the majors, he allowed zero runs.

As a relief pitcher, Bednar’s goal is simple: end a game (most often with two or fewer innings left) without giving up any runs or hits. The role is high pressure. Which is why, with the uncertainty and fluctuating crowd sizes due to COVID-19, he tried to focus solely on the mound and the batter. “I try to create my own mindset out there and not get too high with the highs or too low with the lows. That way I can be consistent,” he says.

Though, for a steel-minded closer, keeping his emotions in check likely proved difficult on opening day of 2021, when—after being traded from the Padres to the Pittsburgh Pirates—he took the mound at PNC Park for the first time, just 30 minutes south of his hometown of Mars, Pa.

“You could just hear the enormous roars from this one little part of the stadium,” Bednar says of when he trotted onto the field. His dad had booked two suites to fit the bursting cheering section. “It was just a perfect day, a moment I will never forget.”

Get ready for the fall athletics season at Lafayette. Game schedules, tickets available