Held in Easton’s State Theatre Center for the Arts, the Lehigh Valley Economic Development Corp.’s Easton on the Rise panel, part of its Fall Signature Event, featured Hurd, State Theatre CEO and President Shelley Brown, VP Development Group CEO Mark Mulligan, 3rd & Ferry Fish Market owner Mike Pichetto, and Editorial Director of Hearst Magazines Enthusiast Group Bill Strickland. Among the topics Brown asked the panelists to explore were the effect of Easton’s festivals on business, what they love about Easton, and how to bring more people into the city.

Hurd shared that Lafayette College and Easton are “one family” and that the College’s culture of combining multiple “ands”—liberal arts and engineering, academics and athletics, and campus and community—brings students to the downtown. She encouraged the community to come to campus to attend faculty lectures, support Lafayette sports teams, enjoy student performances in drama and music, or see a program at Williams Center for the Arts. 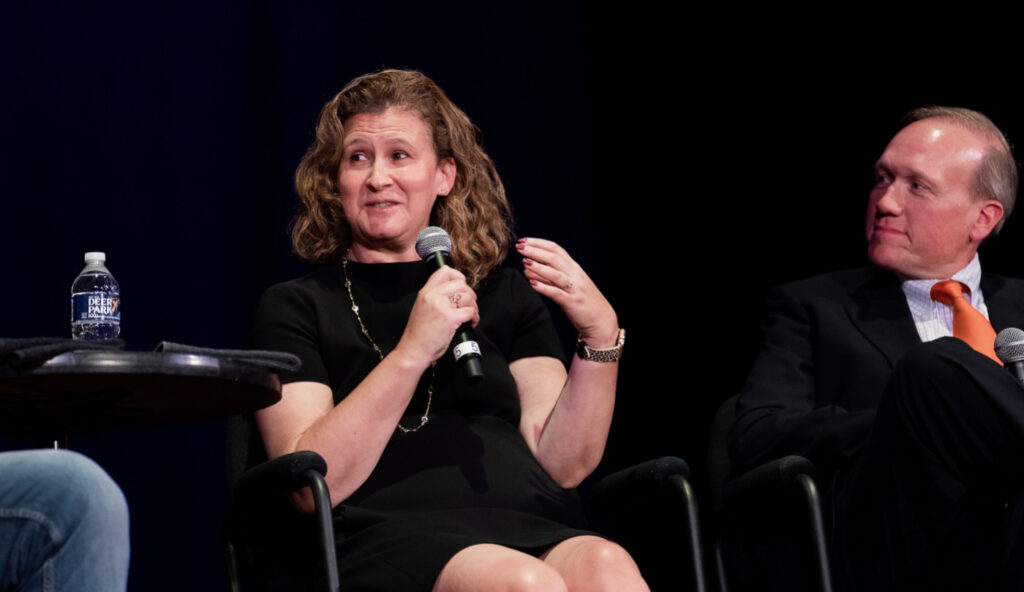 “I extend the invitation because sometimes I hear, ‘Oh, campus is beautiful, but I haven’t been invited.’ We’re all invited, please come,” Hurd said. “There are some really cool things going on.”

Hurd stressed how the city’s growing reputation as a desired destination allows Lafayette to recruit and retain talent, noting that the College received more than 10,000 applications last year for the Class of 2026, setting a record.

Mulligan, whose firm redeveloped the Simon Silk Mill, among numerous other projects, said he would be eager to talk with Lafayette about internships, crediting Lafayette’s partnership with the city for “making a world of difference to the city of Easton.”

Concluding the hourlong conversation, Brown commented, “You can see the enthusiasm and why things happen in Easton because great people are behind them.”