During the pandemic, Heidi Hendrickson, assistant professor of chemistry, suggested to one of her students, Michael O’Connor ’22, to read A Crack in Creation: Gene Editing and the Unthinkable Power to Control Evolution. Although sounding like the stuff of sci-fi, the nonfiction book was written by actual scientists Jennifer Doudna and Sam Sternberg, who discovered gene-writing applications while working in Doudna’s lab at University of California, Berkeley. After reading it, O’Connor was so moved that he proposed a summer book club on campus so other students could learn from it as well.

Biology major Swati Pandey ’23 was among those participating in the book club during summer 2021. Throughout meetings, she noticed rigorous and passionate dialogue about the medical possibilities—and moral ethics—behind this new Nobel Prize-winning research.

“I told Prof. Hendrickson that we should definitely take this conversation out of the classroom,” Pandey says. 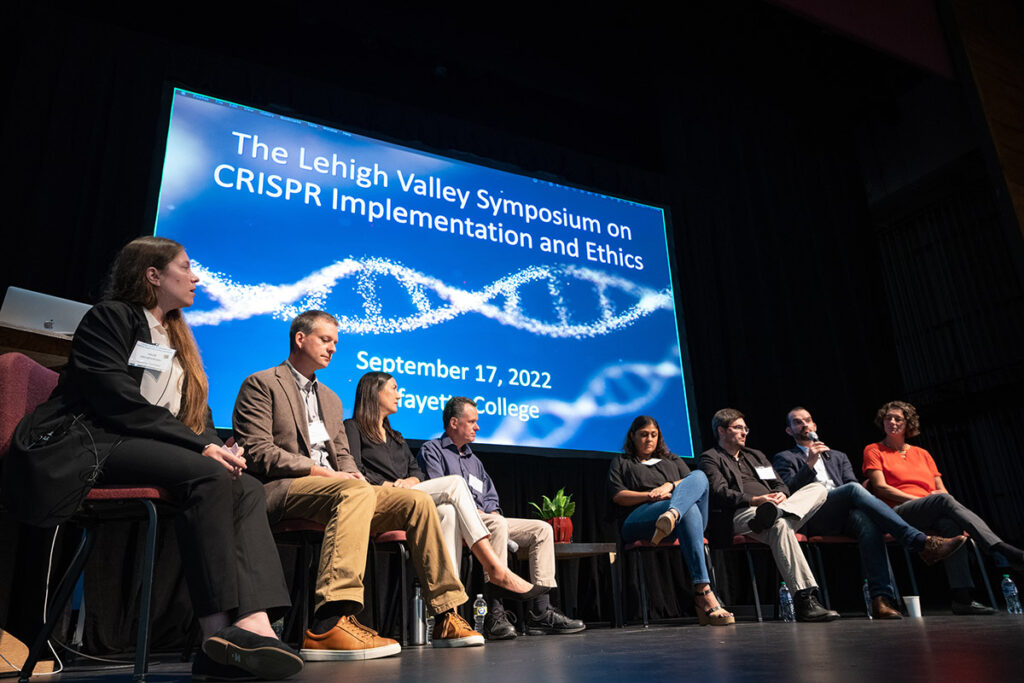 With the help of a student and faculty committee, Hendrickson, Pandey, and Samantha Ganser ’23 began planning a symposium at Lafayette where experts, scholars, and students could come together and talk about the power, both good and bad, behind this life-changing technology, called CRISPR-Cas9. After an entire year of preparation, they hosted the Lehigh Valley Symposium on CRISPR Implementation and Ethics (LV-SCIE) on Saturday, Sept. 17, 2022. More than 100 people attended the free event, which was held inside Williams Center for the Arts.

The idea was so compelling for a symposium, says Ganser, because this technology has the capacity to control human evolution—something that’s never been done before. This major development comes with caution: While CRISPR can potentially cure thousands of genetic diseases, this same technology also could result in something terrible, like a resurgence of eugenics.

Co-chairs Pandey and Ganser kicked off the symposium with a brief presentation. They provided background on the basic science of CRISPR, as well as an overview of how tools, like CRISPR, are not value-neutral and might have ethical implications.

“Knowing about the tool is important,” Pandey says. “But realizing the way in which it is employed, which is usually done by the non-scientist crowd, is what will affect most of civilization.”

Key to the LV-SCIE programming was delivering information in a simplified way so everyone in the audience could process it. “It’s imperative that we get the general public to understand what’s happening,” Ganser says, “because the technology and the science are not stopping.” Another goal was interdisciplinarity: In addition to receiving support across departments and funding from the College, Lafayette groups from the Division of Campus Life to the Hanson Center offered their help.

“Everyone was really excited about the opportunity to collaborate,” says Hendrickson, explaining the interest also extended to nearby institutions in the Lehigh Valley. “CRISPR is one of those key technologies that changes the face of science.” 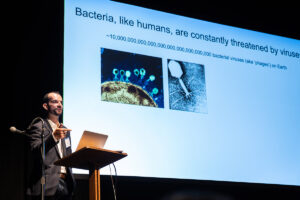 The symposium’s diverse lineup of speakers included two keynote lecturers. First was Dr. Sternberg, currently an assistant professor at Columbia University, where he also runs a research lab that further explores CRISPR. Part of Sternberg’s message emphasized the importance of basic science research. (He and Doudna were actually studying the bacterial immune system when they landed on this method of genome editing.)

“It’s a discovery of serendipity,” says Pandey, adding how she’s inspired by these scientists who truly consider the various impacts of their findings. “The scientific aspect of CRISPR is extremely exciting, but the implications of its social use are much greater.” 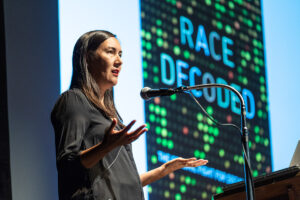 Dr. Rina Bliss, second keynote speaker, is a sociology professor from Rutgers University whose research explores the impact of emerging genetic sciences. (This past summer, Lafayette students read her book, Social by Nature, in the book club.) Ganser explains that CRISPR can, unfortunately, be used to increase inequalities—and sometimes unintentionally.

“Our health systems are built in a manner that predisposes inequality,” she says. “Even in the absence of people who are trying to be malicious, we will still have social issues associated with gene-writing technology.”

Other highlights from the event included an audience Q&A moderated by Hendrickson, a giveaway of books authored by Bliss and Sternberg, and a poster session displaying the work of two dozen students from Lafayette College, Muhlenberg College, Cedar Crest College, and Messiah University. Hopefully, says Hendrickson, this won’t be the last time we are talking about gene editing. There was so much positive feedback from the symposium, she says, that there’s already been preliminary consideration for a virtual follow-up event in the spring.

“We shouldn’t just end the conversation after the symposium,” Hendrickson says. “We need to regularly think about it as a community going forward.”

The event was sponsored by:

Using science for the greater good