Continuing his decade-long partnership with Lehigh Valley Public Media, Mark Crain, William E. Simon Professor of Political Economy and chair of policy studies, once again challenged Lafayette students to explore complex and often thorny topics to produce a series of segments focusing on the state of political discourse and other key issues surrounding the midterm elections.

In Shifting Democracy, to be aired on PBS39 starting Friday, Oct. 28, from 7:30-8 p.m., Crain’s students worked with senior staff at Lehigh Valley Public Media to produce a four-episode series that will include conversations about eroding trust in democratic institutions, reactions among young voters to the Pennsylvania gubernatorial race, how labor unions influence elections, and perspectives from international students from Ukraine, Russia, China, Taiwan, and India.

There’s even a skit about political anger management and a quiz show, “Party Clashers,” matching the College Democrats against the College Republicans.

“One thing I have learned from this process is how many details go into producing a broadcast,” said Hammel who worked with her classmates, Anna McKay Radcliff ’23 and Alexa Sadowski ’24, who connected her with an alumni advisor who ultimately led her to Monica Amorosi, a therapist who works in stress management.

“Setting up meetings with her and creating a skit with her were amazing. She truly helped me so much,” she said. “She put a lot of effort into the skit and piece as a whole and taught me so much about anger management and conflict resolution.” 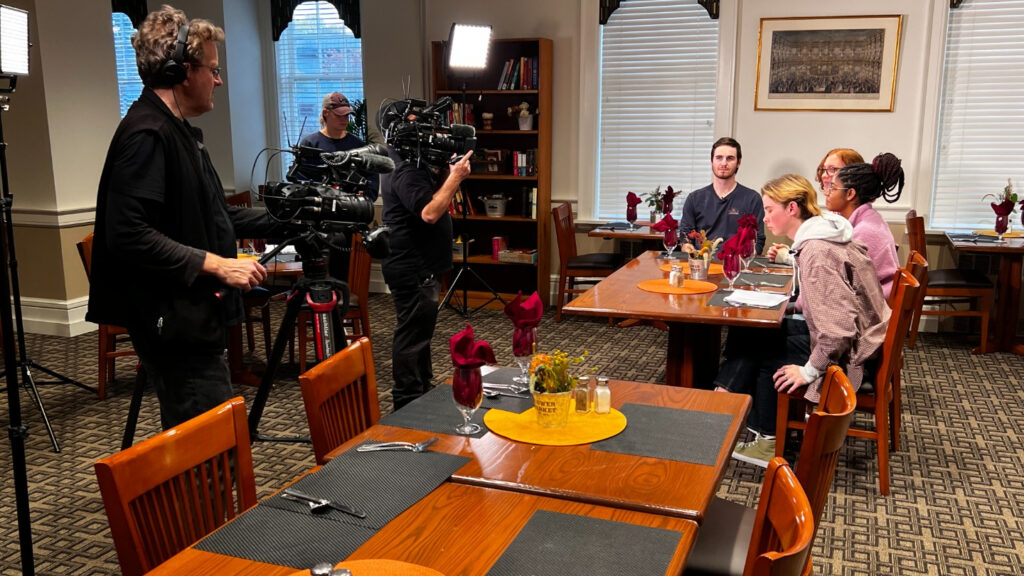 Coming well-prepared to the PBS39 studios, King (government & law and economics) slipped comfortably into the interviewer’s chair and posed a series of fast-paced questions about redistricting and gerrymandering to his guests.

King easily took direction and cues from Sadowski (economics and policy studies, data science minor), the producer, Crain, and PBS39 staff, inserting a few additional questions and details to add a final layer of polish on the professionally produced segments.

After the taping, Borick, who has provided political analysis for the BBC, National Public Radio, PBS, MSNBC, CBS News and NBC Nightly News, among other news outlets, told King how impressed he was by the depth of his questions and his conversational style. 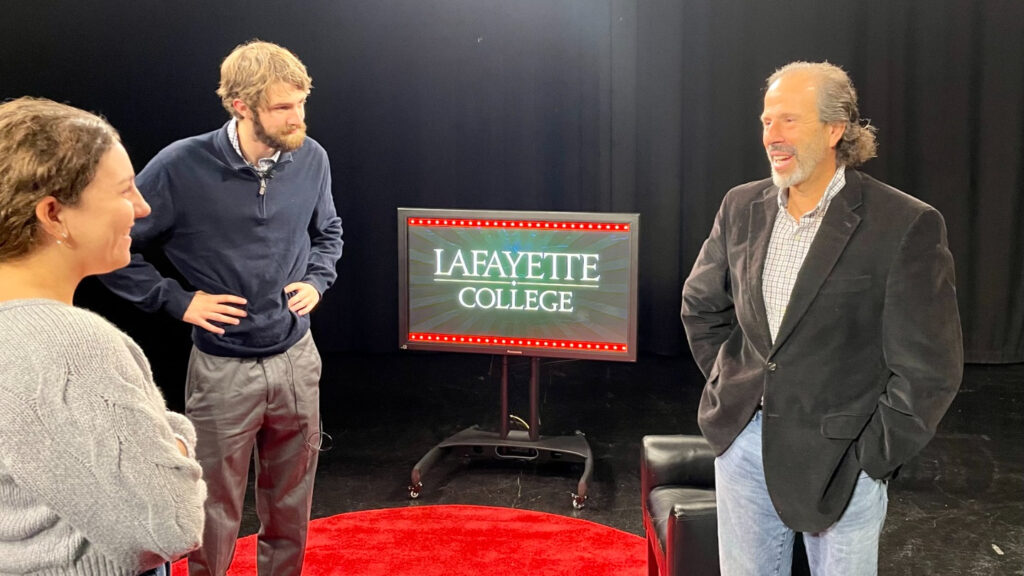 Alexa Sadowski ’24 and Travis King ’24 chat with Christopher Borick, a political science professor at Muhlenberg College, after taping a segment about redistricting

Freeman, too, expressed his appreciation for the professionalism and high level of preparation displayed by the Lafayette students.

King credited Crain for his “comforting, welcoming aura” and his experiences presenting in class and before the Lafayette Forensics Society for helping him prepare for the interviews.

“I’m not a perfect public speaker by any means,” said King, who plans to pursue a career in law in the Lehigh Valley and then perhaps transition into local politics.

“But confidence comes with all of this support and opportunity to explore topical issues at Lafayette,” he added. “It got me interested in how policy actually works and how the electoral process works.”

Sadowski said she appreciates how Crain allows and encourages creative freedom in the production of the segments, while always being ready and willing to provide technical and topical coaching.

“I worked with Prof. Crain on the podcast series last year and know how to create story boards and frame things,” she says. “It’s been exciting to do it again, this time focusing on how Pennsylvania districts are drawn and the implications of that in a battleground state. It’s definitely a challenge, making sure that you get everything you want but keeping it really tight.”

Crain stood in the shadows during the taping, a slight smile indicating his satisfaction with the students’ work.

“Just incredibly well-researched,” he said after King finished the Borick and Freeman interviews. “It seemed quite natural. The conversation really went smoothly. And hard technical details came out in a very intuitive, user-friendly way for a nonspecialist to follow.”

The production of Shifting Democracy has included about 125 Lafayette students engaging in panel discussions, one-on-one interviews, and “man on the street” shorts. Students in Crain’s two Policy Studies courses provided the organizational leadership behind the broadcast.

“I’ve worked with Prof. Crain for two years now, and he has taught me a lot. He definitely puts a lot of pressure on you to do well, but it is important to learn how to work under that kind of pressure,” Hammel said. “He also knows what we are capable of and will settle for nothing less, so we push ourselves to be able to produce things we didn’t think were possible. He is always ready to step in and help us with whatever we need, so that we can achieve what our goals are.”

“They have been amazing,” he said.

Hammel also expressed gratitude for the PBS39 staff’s professionalism and support and for the teamwork displayed by her classmates.

“They helped without judgment and improved our work so much, again helping us achieve our full potential,” she said. “This experience has definitely been a lot of work, but also so unbelievably beneficial. Being able to show a potential employer that I was on PBS and also produced a broadcast available to millions of viewers puts me at an advantage for any media position.” 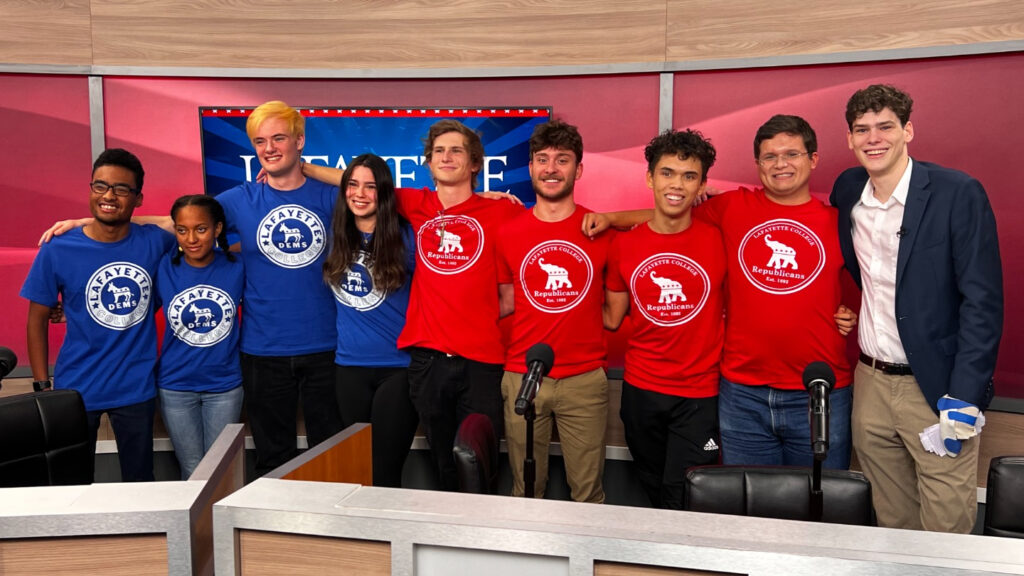 Crain, along with Nicole Crain, who is now professor of economics at the National Defense University, formed a partnership with PBS39 in 2012 to produce coverage of the national elections. The partnership expanded since then and now includes Lafayette Lens, an hour-long series covering issues of global importance, and collaboration on the new podcast series.