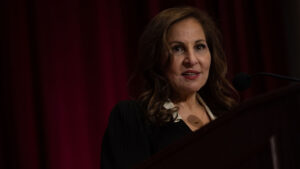 On Oct. 20, actress Kathy Najimy visited Lafayette’s campus for Halloweek. Najimy, a San Diego native, is famously known for her roles in Hocus Pocus and Sister Act, as well as performances in over 50 TV series and 30 films. In describing herself, Najimy says she’s a “human first, mother second, actor third …”

“I’m an activist. That’s what I wake up thinking about and before bed—maybe after a snack before bed—but the cool thing as an actor is sometimes you get to speak about what you believe in and sometimes you get it put into a magazine,” Najimy mentioned in response to a question about her relationship with activism and her career as an actress.

Najimy spoke about a range of topics, from how she put on her first self-produced musical at a very young age and made the other kids in her childhood neighborhood be a part of it, to her singing telegram gigs, to her experiences filming Hocus Pocus 2. Najimy also spoke about how within her activism, she continuously fights for everyone to choose what they want to do with their lives and bodies.

“You don’t have to be what the world believes or expects of you,” Najimy said. “Instead, invest in you and what you believe in.” 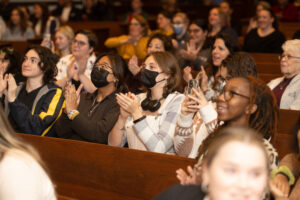 Melissa Dalrymple, associate director of Student Involvement, said Najimy was selected as a speaker for Halloweek because of her values and her authenticity through all of her work. This year’s event was organized by Sarah Smith ’24, director of cultural, media, and entertainment for Lafayette Activities Forum (LAF).

Prior to her talk, Najimy attended a Q&A session with students from several Women’s and Gender Studies classes to speak more in depth about activism.