During a Dec. 15 appearance on NPR’s Marketplace, Julie Smith, professor of economics, offered her views on why 2% came to be the Federal Reserve bank’s inflation target. 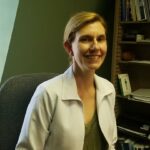 It turns out that, in 1990, the central bank of New Zealand aimed for 2% and the nation’s economy performed well, said Smith, a frequent guest on NPR’s flagship business news program. Other countries adopted it, although there are mixed opinions about whether the 2% target actually results in economic growth, she noted.

Listen to or read the segment.