Over the past couple of years, Rick Moore ’69 seized an opportunity to write. Like some people, he had more time at home due to the pandemic. He also had recently semi-retired from his civil engineering and consulting career. And, most importantly, he was finally ready to share some of the stories from his life—specifically, memories from his tour of duty during the Vietnam War. 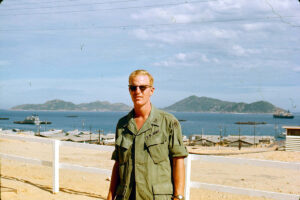 Moore, a first lieutenant in the Army Corps of Engineers, drew from the dates and details in an old journal that he kept while overseas. He compiled them in his book An Officer’s Journey: Coming of Age in the Vietnam Era, which describes two years in the U.S. Army, first as an instructor at the Army Engineering School at Fort Belvoir in Virginia and, later, as a platoon leader in the Central Highlands region of Vietnam. 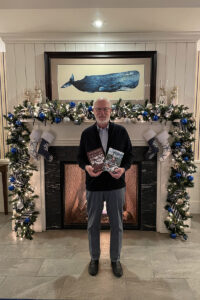 Moore, holding the two books that he wrote in 2022.

While writing the introduction, Moore realized that he wanted to take the stories from before his service—growing up in Cresskill, N.J., and attending Lafayette—and create an entirely separate book, which he titled A Charmed Young Life. (The books are chronologically written: A Charmed Young Life ends on the same day that An Officer’s Journey begins.) Remarkably, Moore completed both memoirs during the first year of the pandemic and published them in 2021. “It just flowed,” he explains, adding that he always wanted to edit his journal.

For the past 50 years, Moore has spent his entire career in Boston. He moved to Massachusetts after graduate school for a job with a leading environmental engineering company called Metcalf & Eddy, and the timing couldn’t have been better: Congress had just passed the Clean Water Act of 1972, which meant that there was a serious investment in cleaning up the nation’s waterways. (This fortuitous moment for his career, to some degree, influenced the title A Charmed Young Life.) Throughout his many years helping to control water pollution, Moore also was extensively involved in the Water Environment Federation, mostly at the federal level. He eventually founded his own company, Moore Engineering, in 2017.

One of Moore’s proudest achievements happened in 2005, when he was appointed by Mitt Romney—then the Massachusetts governor—to work on the Goddard Council, which promoted STEM education in the state. As the council’s engineering representative, Moore helped to boost interest and diversity in STEM. (When he graduated from Lafayette in 1969, the engineering industry was made up almost exclusively of white men.) “Getting folks interested in STEM at a young age is critical to feed the pipeline,” Moore says. “I cherish that part of my professional career.”

For the past 20-plus years, he continued this pledge to open doors for others through a scholarship at Lafayette, which supports disadvantaged students who are studying his former major, civil engineering. “The skyrocketing, breathtaking cost of college today is daunting for so many people,” he says. “I had help to get through school, financially, and I remember that.” In his first book, Moore describes how, after his father died during the summer before his first year, Lafayette alleviated the burden of tuition through additional financial aid. Since establishing the scholarship, Moore has been able to meet some of the recipients who have benefited from his philanthropy. “It’s just delightful,” he says.

Moore also writes about a critical piece of advice he learned as a student of the late Robert DeMoyer, who was the head of Lafayette’s Civil Engineering Department. “He taught us an interesting lesson about quality,” Moore says. “He said that you don’t have to get things perfect. You only need to meet the requirements of your client.” If engineers work toward that level, explained DeMoyer, then they’ll have a much better chance of satisfying other important criteria like delivering a project on budget and on time. In other words, you don’t have to make a perfect bridge—you just have to make a bridge that meets the client’s expectations. 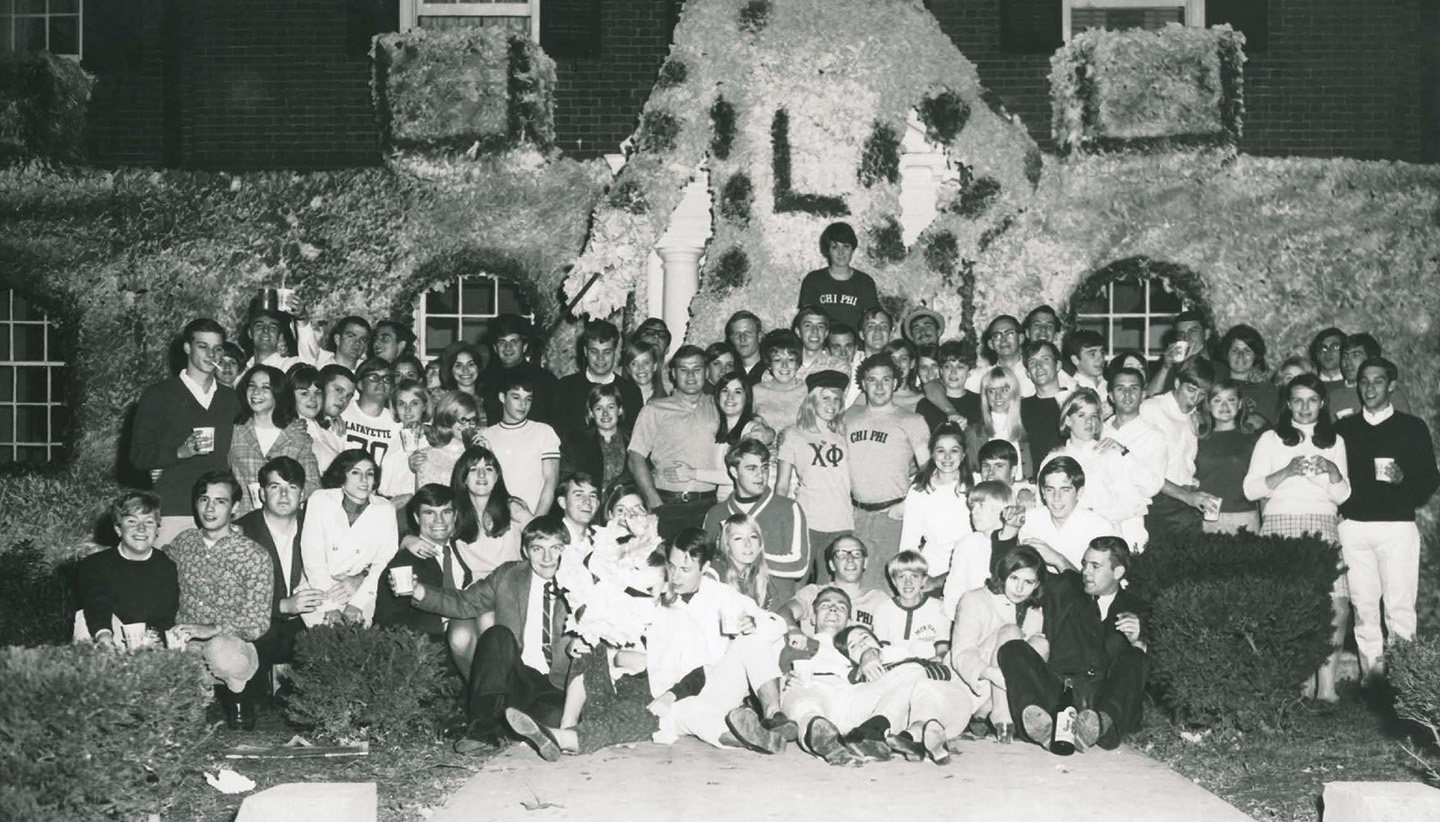 Time on College Hill was formative outside of the classroom as well, especially through Moore’s lifelong connections made in Chi Phi. “I couldn’t have had a better, more constructive experience,” he says. He was so moved by the comradery, in fact, that a photo from the group in 1968 is featured on the book cover. Even the architecture of the Chi Phi Rock Room, which is built into the foundation, was fondly recalled in Moore’s pages: “It was about 12 feet wide and L-shaped, running all along the cliff side of the house,” he wrote. “The interior walls in the room were bare stone, the ceiling was the porch deck with exposed support beams, and there was no heat.” 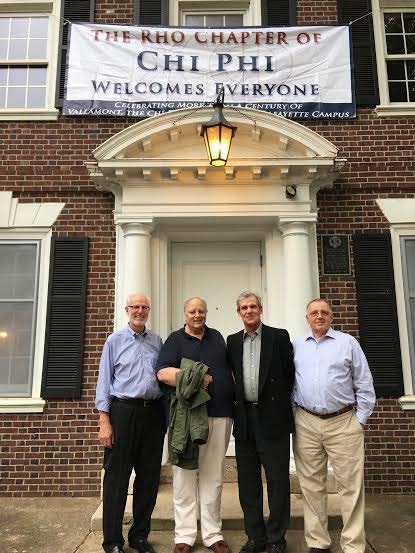 Moore, who was Chi Phi president his senior year, remains active with the chapter. He volunteered on its alumni board, alongside Alumni Association president Michael Weisburger ’82, to help raise money for building repairs in 2017. Additionally, he has a Zoom call scheduled every few weeks to connect with far-flung fraternity brothers from places like Maine, Florida, and Hawaii. Finally, despite living hundreds of miles away from Easton, Moore makes an effort to visit and recently attended the Lafayette-Lehigh football game in November. “It was very cold,” he says, “but we won.”

Moore says that President Nicole Hurd’s emphasis on the word “and” in academics—or the power behind learning in an interdisciplinary environment—resonates with him. “We used to have discussions at the fraternity house about the value of a liberal arts education,” Moore says. “I vividly remember a class on social Darwinism that was a breath of fresh air as opposed to just doing calculations.” This philosophy was deployed, again, when the engineer decided to get into writing.

If he could offer any advice to current students, Moore would explain that taking risks and diversions, especially through service, can open up opportunities for personal and professional growth. Moore, for example, spent two years running a company in India, living there, and working to clean up its water pollution and prevent disease. “There was so much to do, but it was extraordinarily rewarding to see that a little bit of work could do so much good,” he says, adding that this experience abroad has inspired him to begin a third book on India. “You need to get out of your comfort zone from time to time throughout your life.”

Walter Scott ’59 reflects on a lifetime of Lafayette loyalty