Drew Friedman ’16 (Port Washington, N.Y.) almost won the March 15 episode of Food Network’s “Chopped,” making it all the way to the final round.

Though he came up short of the $10,000 first prize — money the economics and psychology major planned to donate to research into colitis, an ailment his brother suffers from — Friedman still believes his appearances was a win.

“While I have always been a competitive person, nothing could compare to the experience I had on set,” he says. “The authenticity, and realness of the competition brought everyone together.”

Friedman appeared on the cooking-challenge show as a contestant, squaring off ladle to ladle with other college-student kitchen masters. But despite mad skills he’s been honing for years, Friedman doesn’t aspire to be the guy in the big white hat; rather, in a few months he hopes to rock a business suit with a degree with majors in economics and psychology.

“Ironically, I guess, [cooking] is the part of the industry I don’t want to get into,” he says. As part of his work at Lafayette, he’s seasoned his financial management expertise at New York culinary companies Atamarea Group and Union Square Hospitality Group.

Friedman’s course to killer kitchen chops began when he was a child. His mother is a caterer in Long Island, N.Y., and works long hours. His dad doesn’t know how to cook. That meant time for the young Friedman to tinker around the stove on his own, and soon he was whipping up his own pasta dishes and worrying over sauces.

By his teenage years, Friedman’s culinary dabbling was half-baked no more. In 2009, as a 15-year-old high school sophomore, Friedman used some of his mother’s catering-business contacts to cook up a charity event. During Cuisine for a Cure, Friedman cooked meals like chicken francaise and wasabi-rubbed skirt steak, sold them and donated the money to The V Foundation for Cancer Research.

He held the event twice in two years, first at his house and then at a venue with more seating in his hometown. With an assistant, the teenager made food for about 200 people, and raised about $10,000 for cancer research.

“It was by no means a bad experience,” he says. So why choose boardrooms over kitchens as a career? 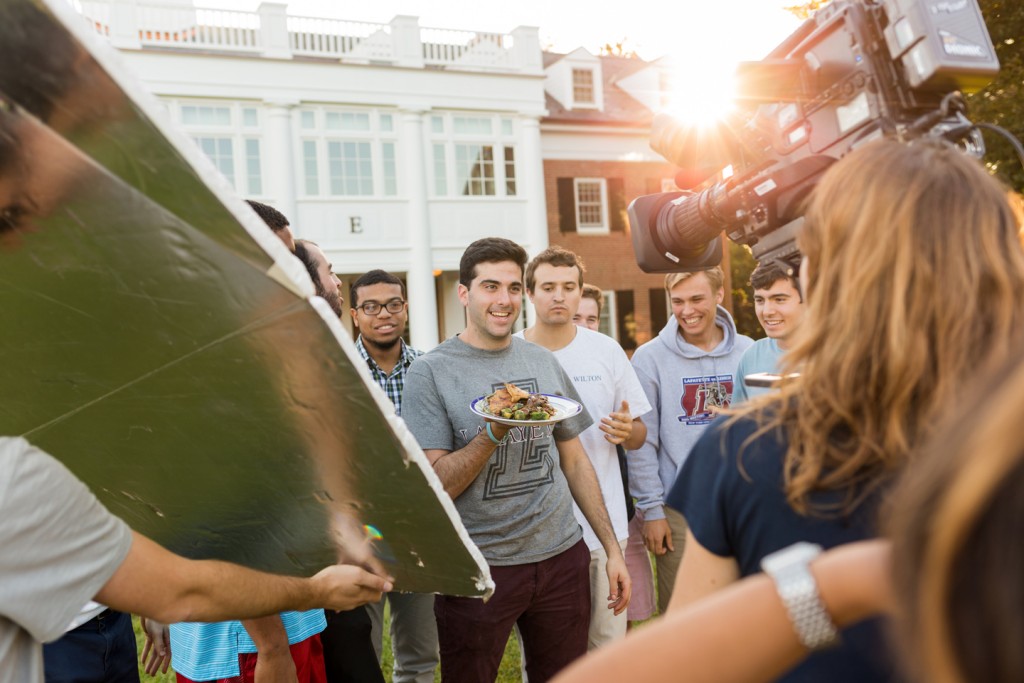 Friedman still considers the lands of pots and pans his playground, a place to blow off steam and produce goodies to brighten the days of his friends. An escape, not a life.

“Everyone has their way to have a moment of peace and a way to step outside the crazy world that is all around us,” he says. “It really gives me a little Zen. Relaxes me. Makes me come back to baseline.”

Friedman lives in the Delta Kappa Epsilon fraternity house, where there’s a mammoth kitchen. The budding economist is in there four or five times a week and keeps the residents there awash in his creations like steak, burgers, wings, and dips.

Last year, Friedman took his M.O. overseas. Studying abroad in London, Friedman had access to a full kitchen in the townhouse where he lived. Students from all over the building dropped in for a bite. One girl lived on the floor beneath Friedman’s and seemed fascinated by his personality and cooking skills.

When he returned to school, he found an email from the girl waiting for him. One of her friends was an intern on “Chopped.” Friedman, she said, should apply.

The food challenge pits contestants against one another to concoct the best dish from loaded pantries, but must beat a 20-minute clock and feature odd ingredients like cotton candy or tripe.

Each episode consists of three rounds. The winner, selected by judges, takes home $10,000.

Hundreds of people apply for the chance, so Friedman didn’t hold out much hope. But the show contacted him and he went through five interviews. Not tryouts – evidently the producers are more concerned with personality. Friedman had to describe food and talk about what he’d do in certain situations.

Where do you shop for ingredients?

In town, I would probably go to Wegmans the most for food shopping.

What’s your favorite restaurant in the area?

What do you get when you have to pick up something to eat at Wawa fast?

I try to avoid Wawa as much as possible.

I always say I should have an answer to that question, but I don’t really. Though, I will never turn down any kind of Asian food.