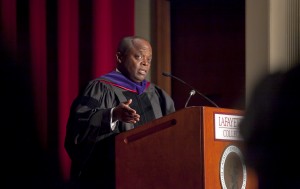 This year’s keynote speaker was Alvin Yearwood ’83, a judge in the New York City Criminal Court and acting Bronx County Supreme Court justice. After graduating from Boston University School of Law, he began his career working in the Bronx County District Attorney’s Office, where he prosecuted rapists and child abusers in the Domestic Violence/Sex Crimes Bureau. He considers this some of the most important work of his career, as he helped pioneer the use of DNA evidence in the Bronx County District Attorney’s Office. An international affairs graduate, Yearwood has continued his involvement with Lafayette as a mentor and internship sponsor through Career Services and is a member of McDonogh Network steering committee. The College presented him with the Kidd Award for distinction in his career in 2014.