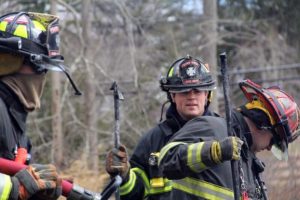 Mike Donnelly ’17 during his internship with Easton Fire Department

Some kids pop in reruns of Sesame Street, The Wiggles or Curious George. Others will opt for Dora The Explorer, The Backyardigans or SpongeBob.

Mike Donnelly’s go-to videos as as child were a little more sophisticated and telling of the future.

Lafayette’s starting right tackle couldn’t wait to press the play button on the VHS tapes he had of firemen. And when he wasn’t watching those, he would read and re-read a book he loved about fire trucks. He also made many visits to fire stations, the first of which was on his third birthday when he hung out with his uncle, who was a fireman in Trenton, N.J.

“It became a passion,” he says. 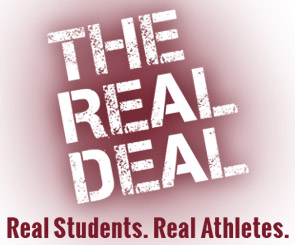 So much so that at the age of 15, Donnelly ’17 joined the volunteer fire department in his hometown of New Canaan, Conn., which is about an hour from New York City. As he grew, so did his responsibilities and credentials. Now, he is certified in FF1 and FF2, which give him the green light to go into burning buildings.

That love has grown so deep that he gave up much of this past summer, his final one in college, to be an intern with the Easton Fire Department. And although he’s getting his degree in economics, he’s decided that he wants a career as a firefighter.

Easton Fire Chief John Bast, whose department hadn’t had an intern in about 20 years, was blown away by Donnelly’s maturity, work ethic, willingness to take advice and his sheer knowledge of the field.

“If it weren’t for the civil service, I would hire him now,” Bast says. “I already have it in the budget for him to come back next year.” 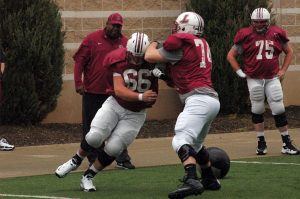 Mike Donnelly ’17, number 66, on the field during practice

At 6-foot-4, 295 pounds, Donnelly has worked hard to build muscle, stay in shape and have the stamina to be a Division I FCS lineman. That endurance and strength will be beneficial to his success when he becomes a full-time fireman. He needs to be strong enough to rescue people from burning structures and maneuver around bulky, heavy equipment, hoses and ladders while wearing 80-plus pounds of gear.

“Football gives me a step ahead of those people who don’t have the time to work out,” he says. 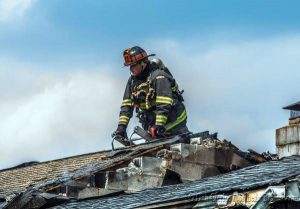 Mike Donnelly ’17 during his internship with Easton Fire Department

It has also taught him the importance of staying calm under a constant state of pressure.

“When you get to the front door of a house, and it’s really dark and smoky, and you can’t really see where the fire is, you have to listen for it and feel where the heat is coming from,” he says. “You’re basically blindfolded trying to find the fire and the victims. But you’re not alone in the situation. And you can’t worry about the dangers really. You have to think about the job you’re given. If your job is to take the hose, you take the hose in. If your job is to find someone, you find them.”

It’s the same philosophy he applies on the field; protect the house at all costs.