Mae Jemison was raised in Chicago during the 1960s, a turbulent time when the civil rights and antiwar movements sparred in her back yard.

In 1992, when she looked down from the flight deck of the Space Shuttle Endeavor for the very first time, what she saw were the lights of Chicago. Jemison tried to remember the little girl looking up. She’d come so far. How would she bring what she’d learned back home to fix things down there? 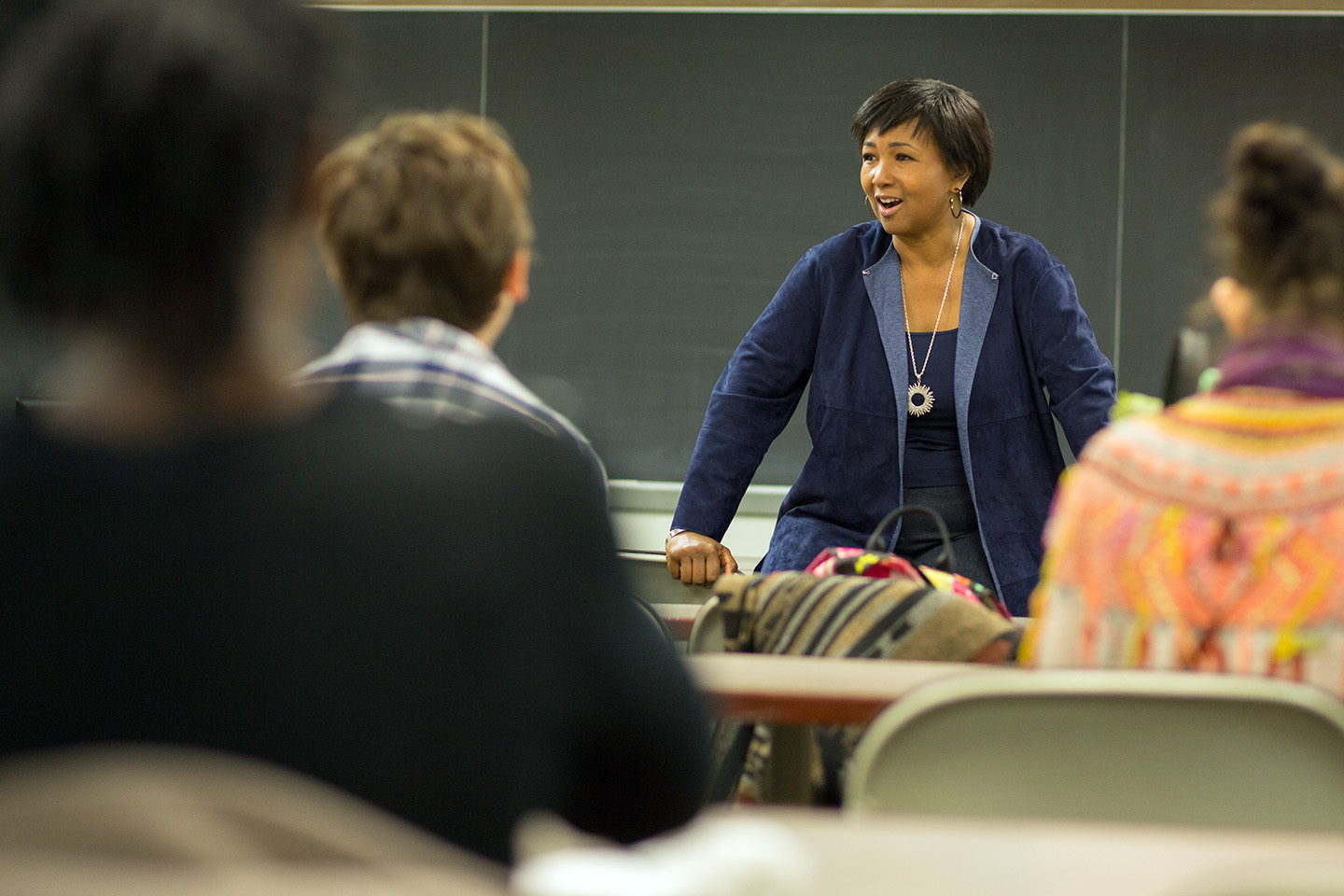 “I always ask people, what do you do with your place at the table?” Jemison asked a crowd of students and visitors Nov. 17 at Colton Chapel, “Do you just act like everyone else, or do you bring your perspectives to bear?”

Each budding scientist said her own perspective was challenged during Jemison’s wide-ranging talk that veered from what’s on the menu on a space ship to ways human beings can better relate to one another.

In her latest incarnation, she heads 100 Year Star Ship, an initiative to give humans the ability to fly to the nearest star – 4.2 light years away – in a century. That’s a lofty goal to some, but it’s grounded in earthbound practicalities. For example, how do we get along with another? Are there better ways to obtain energy?

“Everything that’s required for an interstellar journey are the same things that are required for us to survive as a species on this planet,” Jemison said.

For Buczek, a chemical engineering major from South River, N.J., that, and Jemison’s startling descriptions of the vastness of space (“Think of three grains of sand in a cathedral”) struck a chord. 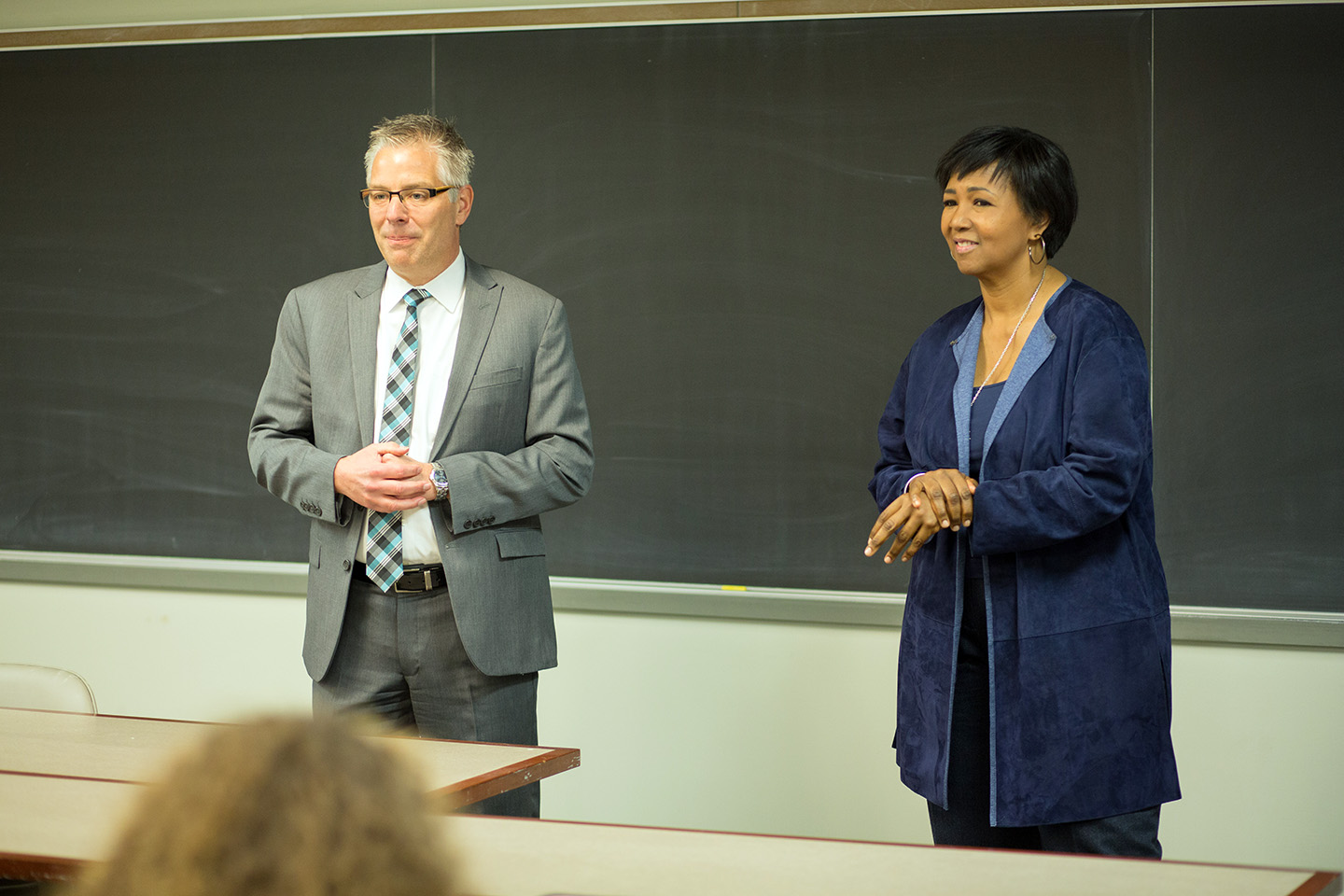 “I liked what she said about not changing and trying to fit into the mold of people that came before and trying to do it their way, because where you come from and your perspective is important and can actually help,” Buczek said moments after the presentation.

She, Shodeinde, and Hernandez stood at the edge of a scrum of students and faculty that surrounded Jemison to shake her hand and talk with the astronaut face-to-face.

During her speech, Jemison said when new perspectives are added, science improves. For example, as she attended Cornell Medical College in the early 1980s, the preferred method of breast cancer treatment in the male-dominated medical field at the time was mastectomy. When more female doctors began offering their perspectives, the method of treatment shifted to lumpectomy – eliminating the need for disfiguring patients who’d caught the disease early.

“It depends on what you look at and who’s looking at it and how it’s interpreted,” she said. “And so that’s the reason why it becomes really important that we have different people involved.”

During her talk, Jemison asked the students if they were aboard a spacecraft, what clothes would they bring? How would they ditch their trash? What food would they eat?

And how would they assign the work? Would passengers do whatever tasks they wanted to do? Would work be assigned? Or would everyone take an aptitude test and work be metered out based on scores?

Most of the audience raised their hands in favor the aptitude test. Shodeinde, a chemical engineering major from Westfield, N.J., was among them.

But Alpha Centauri, the nearest star, would take half a century to reach, even if a spacecraft were traveling at 10 percent of the speed of light. If you chose to assign work based on the results of a test, 50 years of your life would be decided by how you filled in a few bubbles with a No. 2 pencil, Jemison reminded everyone.

“If I were to ask you now which one of you would like someone to assign you work based on a predictive aptitude test, how many of you would say yes?” Jemison asked. This time, nearly everyone – Shodeiende included – kept their hands in their laps. “And that was the most popular one,” Jemison said.

“We’re used to SATs and standardized tests and being told in high school ‘Oh you’re really good at math so you should be an engineer or you’re really good at art, you should do this,’” Shodeinde said after the talk, watching Jemison shake hands with her classmates. “Why is that the norm? Why do we need to have other people tell us what we’re good at, as opposed to going with what you’re really passionate about?  It just never occurred to me. I was like why? Why are we doing this?”

Ultimately, Jemison said, preparation for the voyage could lead to enhancements in energy, science, and social interaction on earth. But new points of view are imperative.

“That path [we’re currently taking] is not necessarily the best path because we’re defining and building it with less than a third of the intellectual capability, passion and experience, vision and perspectives that we have available to us,” she said. “That’s what we’re doing, because we don’t include everybody in it. Because we’re not preparing everyone to be in it.”

Hernandez, a biology major from Arlington, Texas, was equally inspired by Jemison’s talk, but that’s nothing new.

“In elementary school,” she explained, “I did a project on her. On her impact on society. It was very exciting that she was coming here.”

Jemison’s visit was part of the Resnik Memorial Lecture series, named in honor of astronaut Judith A. Resnik, an electrical engineer who lost her life in the Challenger space shuttle disaster on Jan. 28, 1986. The talk was also supported by the John and Muriel Landis Fund.