Ray Troll’s love affair with fish began when he was a teenager.

Troll fell for gasping gill faces the way some people fall for religion or a member of the opposite sex. Decades have passed, and fish are still the vehicles behind his artwork that can be found in the Smithsonian or draped on the torsos of rock stars and famous actors and actresses. 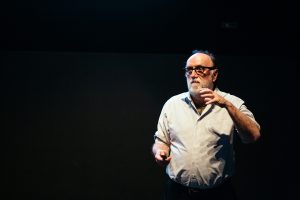 But Troll didn’t visit Lafayette earlier this month to talk fish. Rather, he told an intimate crowd of students at the Buck Hall theater to go fishing for their own inspiration.

Although his professional training is in art, he draws inspiration and passion from the natural world around him. He works with biologists, paleontologists, nature experts, artists, and screen printers to turn his colorful, nature-inspired renderings into posters, wall art, and T-shirts.

Troll’s story spoke to Paige Fenn ’19 (Brattleboro, Vt.), who came to Lafayette to major in biology and art because of the school’s commitment to both science and liberal arts.

“This was really perfect,” she said moments after Troll’s slide show presentation. Seeing someone evolve into an artist who draws from nature was educational and inspiring. 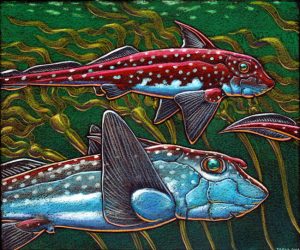 The connection between art and science isn’t always obvious, Fenn says. “The number one recommendation I get is text book illustrator,” she says, “but that’s not exactly what I’d like to do.”

“It was nice to see someone who was able to take a passion that they have and use it,” says Schubert, an environmental science major.

Troll’s presentation featured family portraits from his various stops in a large Air Force family. In Puerto Rico in the 1960s, he first became fascinated with fish – a love that was cemented when he moved to the small town of Ketchikan and got work as a fishmonger. 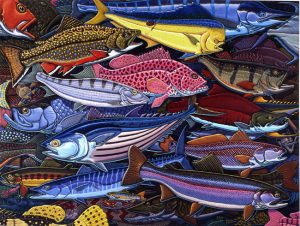 “Inadvertently, I landed in the middle of a fish culture,” he said. “My curiosity was peaked.”

He studied fish. Fish featured more frequently in his artwork. Intricate and accurate depictions of salmon and halibut swam through his canvases. In the early 1980s, Troll made a T-shirt with the slogan “Let’s spawn” printed across it. He made hundreds of sales.

Troll became an entrepreneur and his T-shirts began to sell. Bands like Motley Crue were soon wearing his most iconic creation – a “Spawn Till You Die” T-shirt. Today you see that creation and many others in movies at museums and elsewhere.

“It’s not all about what I know right now,” says Kris Hoessel ’20, who is majoring in film and media studies. “Something might happen after I graduate. I’m really looking forward to what I might learn in the future.”