Biographies for the emeritus faculty are included in the Commencement program: 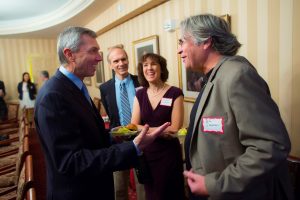 DONALD R. CHAMBERS, Walter E. Hanson/KPMG Peat Marwick Professor of Business and Finance, has been a member of the faculty for 25 years. He received a Bachelor of Science degree in accounting from Binghamton University in 1978 and a doctorate in business administration, with a major in finance, from the University of North Carolina at Chapel Hill in 1981.

Chambers joined the faculty as Hanson/KPMG Professor in 1992. Before coming to Lafayette, he held the Frank Baker Research Chair in Finance at the University of Baltimore and, before that, positions at Rochester Institute of Technology and The Pennsylvania State University.

Chambers’ teaching areas and research interests include corporate finance, investments, alternative investments, derivatives, and risk management. The recipient of two Department of Economics teaching awards, he has served as adviser to numerous majors and honors candidates and as mentor to EXCEL Scholars. He was adviser to the College’s Investment Club, the oldest student-run investment club in the country, which manages a portfolio whose value exceeds $560,000. He played a key role in securing funding for and administering the Gladstone T. Whitman ’49 Fund, which provides internship opportunities and other programming for students.

Chambers has served on the Board of Trustees’ Committee on Financial Policy and other College committees. He also has served as associate director of programs at CAIA, as chief investment officer of Biltmore Capital Advisors, and as a risk management consultant for The Bank of New York. 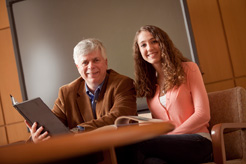 ALAN W. CHILDS, professor of psychology, has been a member of the faculty for 37 years. He received a Bachelor of Arts degree in psychology from Maryville College in 1971 and a doctorate in social psychology from University of Tennessee, Knoxville, in 1975.

Childs joined the Lafayette faculty in 1980. He was promoted to associate professor in 1986 and to full professor in 2001. His many teaching areas include social psychology and health psychology. His research interests include medical practice, especially in patient-practitioner interactions; factors that affect critical medical decisions on the part of practitioners, patients, and their families; and health psychology.

With Prof. Stephen Lammers, Childs developed and taught a two-course summer program in London on ethical and social issues in health care in the United States and United Kingdom. He also developed interdisciplinary seminars on health care in a technological society and on the role of medical technology in patient-practitioner interaction. He has received grants from Lehigh Valley Hospital Center, Dorothy Rider Pool Trust, Pennsylvania Humanities Council, and National Science Foundation.

An adviser to psychology and neuroscience majors and to Lafayette’s chapter of the Psi Chi honor society, Childs has supervised numerous EXCEL Scholars and students in independent study and honors research and has been academic adviser to the men’s basketball team since 1991. He is the recipient of the College’s Marquis Distinguished Teaching Award and James P. Crawford Award for excellence in teaching. He has received the Student Government Superior Teaching Award several times and the Alumni Association’s Daniel Golden ’34 Faculty Service Award.

Childs was awarded an American Council on Education Fellowship in Academic Administration in 1986-87 and spent that year at Colgate University working with the provost and president of that institution, after which he served four years as Lafayette’s dean of academic services. Childs served as the first executive director of the Colonial League, now the Patriot League, and was founding director of the College’s Center for the Integration of Teaching, Learning, and Scholarship. He has chaired many faculty committees and task forces and served as head of the Department of Psychology, coordinator of the Health Care and Society Program, and health professions adviser. 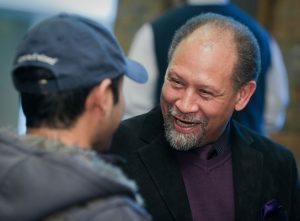 CURLEE R. HOLTON, David M. ’70 and Linda Roth Professor of Art, has been a member of the faculty for 26 years. He received a Bachelor of Fine Arts degree from Cleveland Institute of Art in 1987 and a Master of Fine Arts degree, with a concentration in printmaking and painting, from Kent State University Honors College in 1990.

An internationally recognized master printmaker and painter, he has exhibited his work in more than 60 one-person shows and over 100 group shows, in venues that include the Seventh International Biennale in Cairo; Taller De Artes Plásticas Rufino Tamayo in Oaxaca, Mexico; Cleveland Museum of Art; and Whitney Museum of American Art. His work is in the collections of the Library of Congress, National Gallery of Art, Yale University, and Philadelphia Art Museum, among many others.

The College’s Experimental Printmaking Institute, which Holton founded in 1996 and directs, is at the forefront of African American art and culture nationally and internationally. Artists’ residencies at EPI have yielded more than 350 editions by such artists as Faith Ringgold, Richard Anuszkiewicz, David C. Driskell, Grace Hartigan, and Sam Gilliam. EPI has provided scores of students with the opportunity to work side by side with significant artists and exhibit their work locally and nationally. Works produced at EPI have been acquired by Metropolitan Museum of Art, High Museum, Yale University, and New York University, among others. Holton has served residencies at many museums and colleges and presented more than 70 public lectures. 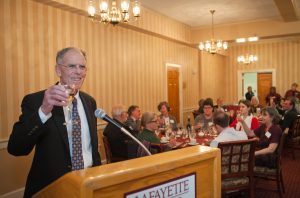 Neil McElroy gives a toast at a Friends of Skillman Library event.

Among notable programmatic accomplishments during McElroy’s tenure, the library gained national recognition for its leadership in developing and using information technology and in partnering with the faculty in teaching and research. It was cited by the Council on Library and Information Resources, Coalition for Networked Information, and other leading academic associations as a model for other colleges and universities.

Through McElroy’s initiative, the College was awarded a grant by the Andrew W. Mellon Foundation in 2013 supporting the training of faculty and students in digital humanities methods and the library’s aspiration to advance innovative scholarship in liberal arts colleges, unify research and teaching, and share lessons of success with the growing international community of digital humanities practitioners.

In 2014 the library received the Excellence in Academic Libraries Award from the Association of College and Research Libraries, highlighting its commitment to digital scholarship, its pioneering of new models for collaborative content acquisition, and the impact of its Information Literacy and Special Collections programs on student learning.

Through gifts from former provost June Schlueter and her husband, Paul Schlueter, the dean’s suite in the library is named in McElroy’s honor, and an award recognizing outstanding work by a member of the library’s support staff is given annually in honor of McElroy and his wife, reference librarian Marilyn B. Kann. McElroy currently serves on the Oversight Committee for Lever Press, a publisher of open-access, digitally native, peer-reviewed scholarly monographs. 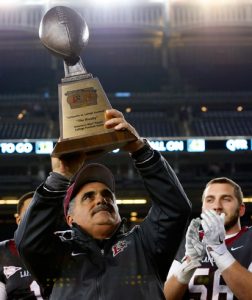 FRANK A. TAVANI retired as instructor of athletics and physical education after serving 17 years as the 27th head football coach at Lafayette. He was running backs coach for 13 years before that.

As head coach Tavani led Lafayette to Patriot League championships and NCAA playoff appearances in 2004, 2005, 2006, and 2013. He was an assistant coach on the Leopards’ league championship teams in 1988, 1992, and 1994. In 2004 he was named Patriot League Coach of the Year and was a finalist for the Eddie Robinson National I-AA Coach of the Year Award. He had the second-most wins as a head coach, 84, in the program’s history, including the memorable victory over Lehigh at Yankee Stadium in the 150th meeting in college football’s most-played rivalry in 2014.

Tavani’s impact extended beyond the field and classroom. He worked with College officials and donors on the transformation of Fisher Stadium, which now features Bourger Varsity Football House as the home of Lafayette football.

Tavani received a Bachelor of Arts degree in psychology in 1975 from Lebanon Valley College. A standout running back there, he was twice named the team’s most valuable player and earned Associated Press All-America honors as a senior. He was elected to Lebanon Valley’s Athletic Hall of Fame in 1988 and joined the Central Chapter of the Pennsylvania Sports Hall of Fame in 2006.

Tavani was the first to hold the endowed football coaching position established in honor of Fred M. Kirby II ’42 by the F.M. Kirby Foundation in 2013. He and his wife, Agnes, are parents of four children, including three Lafayette graduates, Liam ’03, Meghan ’06, and Bridget ’13. Daniel graduated in 2008 from Wofford College, where he was a four-year letter-winner in football.