Home has always been important to Esther Flavien ’20. That’s because she and her family came to America from Haiti in 2005 to find one.

They first settled in Florida, then moved to Philadelphia, and when it came time to decide on a college, she searched for one where a strong community was as important as academics.

“Out of all the colleges I toured my junior year, Lafayette was the one where I felt like I could actually live there,” says Flavien, who was introduced to campus as a prospective student while attending Our Beloved Community Symposium. “I felt like I was at my second home, which was something really important to me.” 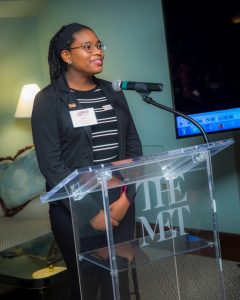 Esther Flavien ’20, speaking at the First Women of Lafayette event held March 31 at the Metropolitan Museum of Art in New York City.

As the first recipient of the David and Washington McDonogh Scholarship, Flavien has big plans to make the most of her time at Lafayette. Having just completed her first year with two semesters on the dean’s list, Flavien is planning to major in psychology and minor in health care and society.

“Psychology has always been an interest of mine, especially cognitive psychology. I’ve always had an interest in why people think and how it influences what they do,” she says. Flavien is also excited by the prospect of participating in undergraduate research.

As for other interests, Flavien developed a love for history, particularly the espionage of the Cold War, and picked up a fifth course one semester in the form of piano lessons, because, as she puts it, “Why not?”

Flavien says a Lafayette education would not be possible without the McDonogh scholarship. “It was such a blessing,” she says. “Now I have that opportunity to go to school and build the foundation I need to have my future career.”