In a hotel lobby in London, two young men sit across from each other, sharing a drink.  The conversation is easy and free flowing. One is the son of a truck driver and school aide, considering his future. The other is a college admissions officer, building a relationship.

Little did they know then what would occur. How a casual talk would take a student from Derby, U.K., to the Moab Desert. From the New York Stock Exchange (NYSE) to the Smithsonian Institute. From Lafayette College to Yale.

The student is Jack Shaw ’17. The journey is profound.

Shaw was a member of the first cohort in a summer school program, run by Fulbright and the UK-based Sutton Trust, that helps first-generation college students achieve their potential by aligning them with American colleges. 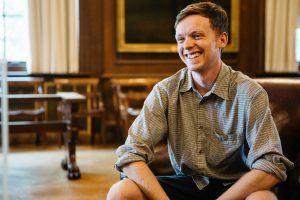 Prior to his involvement with the Sutton Trust, Shaw hoped to be one of the 40,000 students enrolled at the University of Manchester. His meeting with Alex Bates from the Lafayette admissions team changed his life.

Shaw joined the 183rd class at Lafayette as a government and law major on a full scholarship. Diving in quickly, he conducted research as an EXCEL Scholar and designed a major for himself in philosophy, politics, and economics. While on that path, he even had a finance internship in New York City. A trip to the NYSE solidified some thoughts Shaw had.

“I was surrounded by classic finance types,” he says. “I realized then I lacked the competitive edge that would have me put my personal gain above my relationship with my co-workers.”

Luckily, he had a backup plan.

An interest in fracking inspired Shaw to better understand geology in an introductory class.

“I was instantly hooked and declared geology as a second major,” he says. “I didn’t want to give up the critical thinking, writing, and social science of my other major.”

Shaw loved the small size of his Lafayette classes and the relationships he built with the faculty and his peers.

“The faculty became my family since mine was so far away,” he says. “I shared meals with them. Their doors were always open for school questions and life advice.”

Shaw completed another EXCEL project in paleogeography on the latitudinal range of Arctic palm trees. He had a second internship at the Smithsonian Natural History Museum and a research opportunity at a Yale summer program. Shaw graduated in the spring, having earned the Dyson Geology Award for academic achievement and character.

“The faculty and advisers here opened doors and guided me through processes that would never have been possible at a larger school,” he says.

That’s why he is back for a visit. Bates had called him.

“Given our history, I’d do most anything Alex asks of me,” says Shaw.

Bates asked Shaw to bring Sutton Trust students to Lafayette for a visit.

As a volunteer for the sixth cohort of Sutton Trust students, Shaw guides students as a team leader and mentor.

“I want to give back after the life-changing experience I had here,” he says. “These students are looking at colleges in Boston and New York City and feeling a bit overwhelmed as they reflect on their family background and standards of living. Lafayette gives them something more personable to consider.”

As he leans over the glass display cases that fill the entrance to Van Wickle Hall, the geology building, Shaw is interrupted often; professors, staff, and students who spot him pause with a shocked look on their faces before smiling widely and moving to embrace him.

Shaw is now a Ph.D. candidate at Yale in its geology program. Ironically enough, he is studying evolution.

“Thanks to Lafayette, I’ve studied at so many places, including the Grand Canyon and Moab Desert,” he says. “So I understand how far a person can go.”