With the stadium lights flooding Fisher Field, students run, flick, and cheer. Ultimate Frisbee, a club team at Lafayette, is in full practice mode. Backhands wiz around as players advance downfield. Alexandra Scholefield ’21 is one of those players. She may not be the most competitive nor the most accurate passer, but she is beaming with joy. The deep happiness she feels is one that originated on a shipping dock in an African port.

Picture an eight-story ship, a city on water, that holds 450 people. It’s Friday night, and 50 people step off the ship to pick up a flying disc. Age, rank, and tenure all disappear as students, officers, and doctors start playing Ultimate. 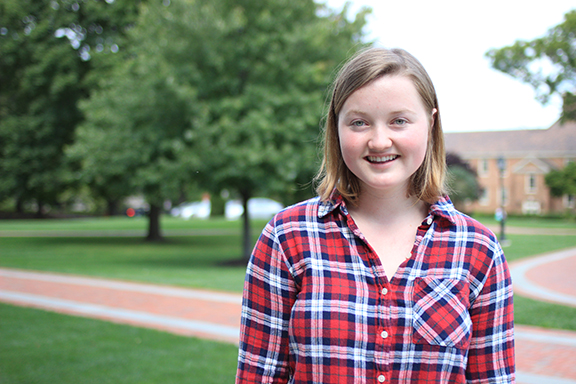 “It was the great equalizer,” says Scholefield. “And the perfect ending to a tough week where I could relieve stress, meet people, get some exercise, and have some fun.”

The strenuous week she was escaping came from the crew performing hundreds of surgeries: benign tumors, cleft palates, cataracts, and fractures. Each day the blind would soon see. People ostracized by disfigurement would be welcome home.

Scholefield was on Africa Mercy, a floating hospital that docks for months in ports along the arc of Western Africa. For six months she served on the ship in the city of Cotonou, Benin, a country between Ghana and Nigeria.

How did this young woman from Southern California climb aboard this medical ship? She paid to be there.

Scholefield knew she needed a gap year after high school. She was burned out.

“I am a perfectionist and often found myself as the victim of my own self sabotage,” she says. “I pushed myself in classes and would spend gross quantities of time on academic work that lacked value.”

She also was caught in a rigid sense of self-identity. As captain of her swim team, she lived in the water with year-round practices two times a day. That’s until she needed knee surgery—three of them.

Without swimming, her foundation was shaken to the point of crumbling. Slowly she began to find new ways to define herself.

“I got involved in leadership roles at school and in community service,” she says. “I completed three short-term service trips to orphanages in other countries.”

As she discussed a gap year with her parents, both supported the idea. As an athletic psychologist, her mother recognized her daughter’s burnout and understood its potential side effects.

Scholefield sought a long-term service trip abroad and found Mercy Ships. The Texas-based nonprofit has ships all over the world that provide free medical care to those in need. Each year a ship pulls into another port, assesses the country’s needs, and then finds doctors, nurses, and staff willing to pay for the opportunity to serve.

There can be high turnover as surgeons and medical staff fly in for a “vacation.” The surgical team is supported by over 200 locals who serve as the day crew. All live on board and share in caring for patients.

“The needs in each country are massive,” Scholefield says. “Thousands seek help and wait in great number to be treated.”

And the jobs on the ship range, like any hospital would, from medical to dietary, from housekeeping to maintenance, from classroom teaching to gift shop management.

Scholefield started in the kitchen, leading the cold side—chopping vegetables and preparing salads.

“I was the newest, youngest, and least experienced and suddenly in charge,” she says. “I had to learn to be comfortable with being the authority while understanding that it wasn’t a title I had earned.”

After a month she transferred to reception, welcoming new crews, patients, and administrators. She rotated across three shifts since care is a 24-hour business.

That’s why Ultimate Frisbee became such a release. She had others as well. Developing friendships with other young adults on the ship was easy. Losing them was harder.

“I had to learn many lessons in friendship,” Scholefield says. “Some relationships were very deep as we shared this experiential journey, doing work, planning events and excursions, or just sitting in the café and sharing a meal or conversation.”

People whom she might not have noticed in her former life became dear friends.

“I learned how to pick friends,” she says. “I had to redefine what I look for, what really matters in order to make a connection. I also learned to respect many different people, traditions, views, cultures, and lifestyles. Boat life can’t make you picky, and I saw how often I misconstrued actions in my past friendships as a demonstration of value.”

Value now comes from navigating a new ship on College Hill. Scholefield is excited to be here and sees the gift that education is and the benefits it brings.

She is finding the clubs and programs that match with her worldview and life goals. As a chemical engineering major, she is prepared to do what she learned on the ship: dive into her work, form lasting friendships, and discover new ways to perceive the world.

And, of course, work on her backhand while having fun tossing around that Frisbee.