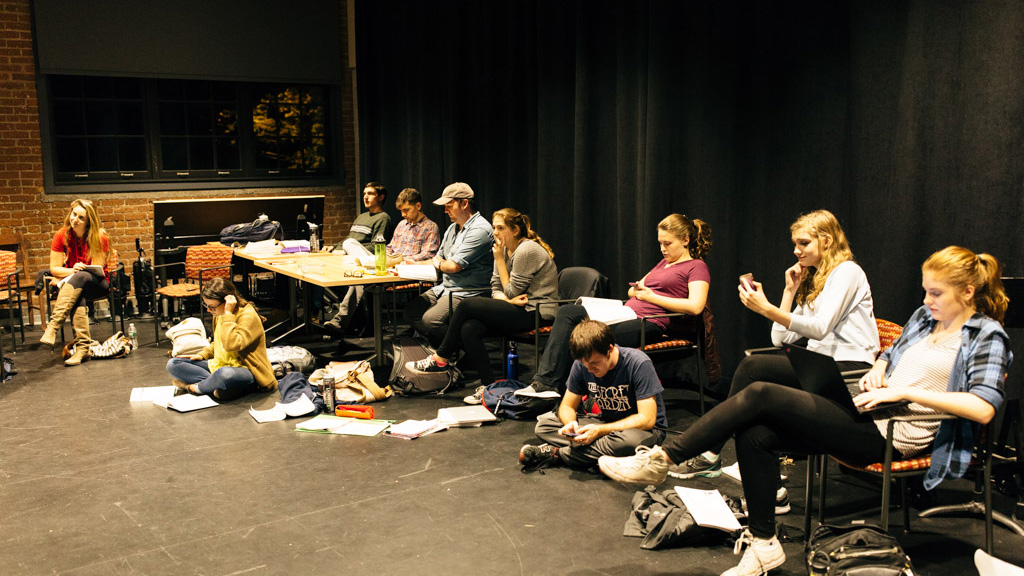 Those movies and plays featuring characters who burst into song for what seems like no reason. Shelves and ledges of the associate professor of theater’s office in Williams Arts Campus are spilling over with scripts, books, and sheet music from Broadway musicals. Over the past 20 years, Lodge has directed 40 plays with singing and dancing. It’s developed within her a dangerous knowledge should her game piece in Classic Trivial Pursuit land on a brown “Arts & Leisure” square.

Two summers ago, Lodge put her Broadway musical smarts to the test. A Broadway teachers conference in New York featured a trivia contest. Lodge went mano a mano with song-and-dance buffs from throughout the nation.

She won. The prize? Rights to the play you’re about to see. 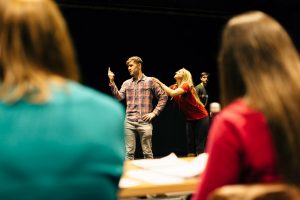 “I have all this useless information,” she says, laughing, “but for once it wasn’t useless.”

In fairness, though, Lodge’s musical theater acumen is anything but useless. In her 13 years at Lafayette, she’s presided over a wide variety of productions—both musical and serious drama. Recently, to take Lafayette’s newly opened Black Box Theater at Buck Hall out for a spin, she sat an audience around three sides of a stage for a production of The Secret Garden. She also completed a production of John Patrick Shanley’s Doubt, about sexual abuse in the Catholic Church.

“I needed a change,” she says.

The Drowsy Chaperone is a lighthearted, “very hilarious” explosion of singing, dancing, and, more than anything, props. “It’s the show of a thousand props,” she says.

The Drowsy Chaperone also will continue Lodge’s experimentation with the Black Box Theater’s configuration. Where The Secret Garden brought the audience on a level plane with the actors, the new production will feature more conventional, raised seating—a move that allows for a larger audience but puts stage space at more of a premium.

The musical, written by a Canadian creative team, premiered on Broadway in May 2006. A love letter to the medium of musical theater, it takes place in the apartment of an unnamed central character. The “Man in a Chair” (portrayed by Matthew Ackerman ’18), a Broadway musical buff, plays an original cast recording of a fictitious 1920s musical that magically springs to life in his apartment.

There are never-ending references and spoofs, and sly allusions to classic Broadway plays and musical films. And in that sense, you could say the play is also a love letter of sorts to the woman whose musical-trivia knowledge won the show for Lafayette.

Final dress rehearsals for theater department productions are open to Easton residents, free of charge, because we know you are the best thing about being in downtown Easton. Mark your calendars now–and come early because seating is limited–for The Drowsy Chaperone at 7:30 p.m. Wednesday, Nov. 1.