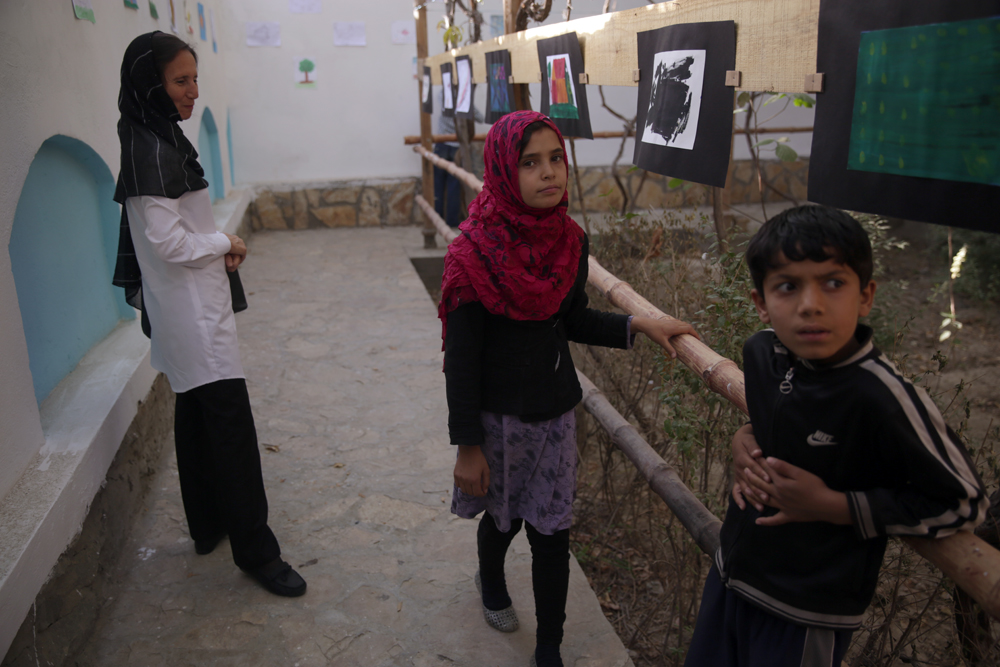 Your mother is crying. Use the paint and paper before you to tell us why.

You pick up a paintbrush and open tubes of paints. Soon strokes and swirls begin to shape your answer. On your left you see a painting of a car accident. On your right you see a house in disrepair. Looking down, the smoke and debris of an explosion fill your paper.

The street children of Kabul, Afghanistan, used art to express themselves under the helpful direction of Fatima Akbar ’18. The assignment above, demanding more intensity and trust than typical assignments, was one exercise the children completed during a two-and-a-half-month summer project funded by the College.

A women’s and gender studies major, Akbar understands the transformational power of art. She studied with Bonnie Winfield, former director of community partnerships for Lafayette, at the local prison in Easton, where women used art therapy techniques to aid with their rehabilitation and self-awareness. 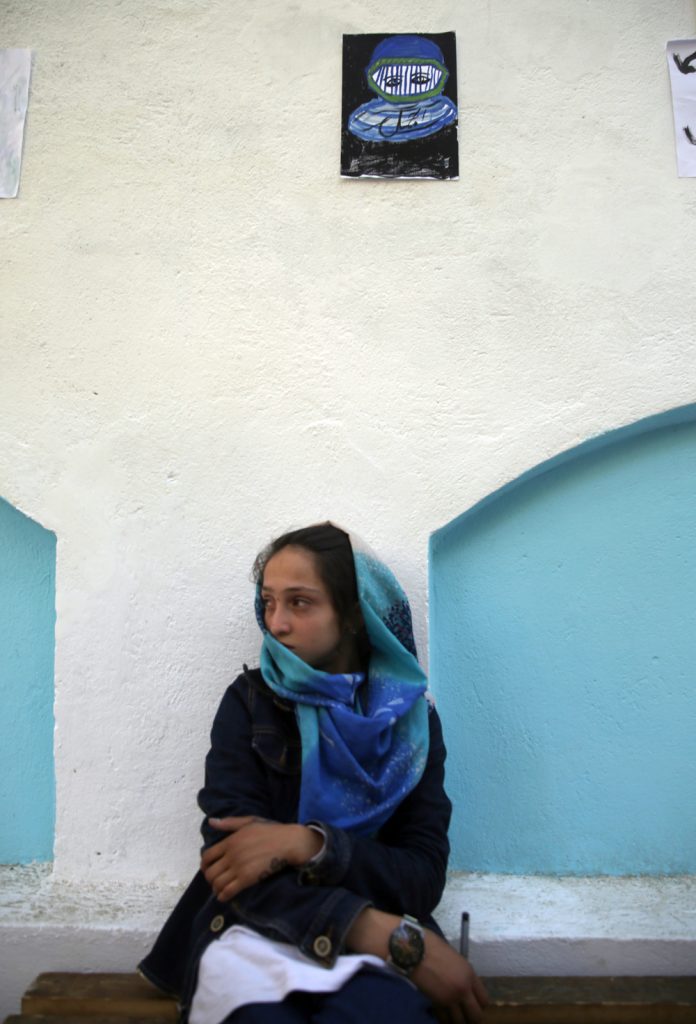 Through a $1,000 stipend provided by Annual Fund donations, Akbar partnered in Afghanistan with Home for Street Children, a school operated by former journalist Baqi Samandar. Children ages 4-18 make their way to the school. Some are consistent in their attendance, but most are not.

These children often choose to work because they have parents who need help or no parents at all. Depending on their age, children might sell cigarettes and gum on the street or sell services like house painting. They earn between 50 and 100 afghanis (afs) a day, roughly one or two American dollars.

Lack of a quality public school system doesn’t help either. Children often feel their time is better spent making money for their families.

“Once on the streets, children turn to work or gangs,” says Akbar. “The Home for Street Children provides an education, meals, and a family relationship that many children lack.”

Relying solely on private donations, the school welcomed Akbar’s programming. She offered two-hour morning and afternoon sessions, open to all.

Thirty to 40 students regularly showed up. Most were boys since families often don’t allow their daughters to work or beg on the streets.

“Students could drop in and have a moment to feel like a kid again,” she says. “The art allowed them to relax, express their emotions, and be themselves.”

Many students worked with abstraction. Others struggled to paint the perfect apple. Their happiest moments came with conceptual assignments: Paint your happiest moment or paint why your mother is crying.

“The younger students really became engaged in the process, making messes, trusting themselves, and acting liberated,” she says. “The older children wanted to develop a new skill. A handful of them were naturally gifted and showed amazing talent.” 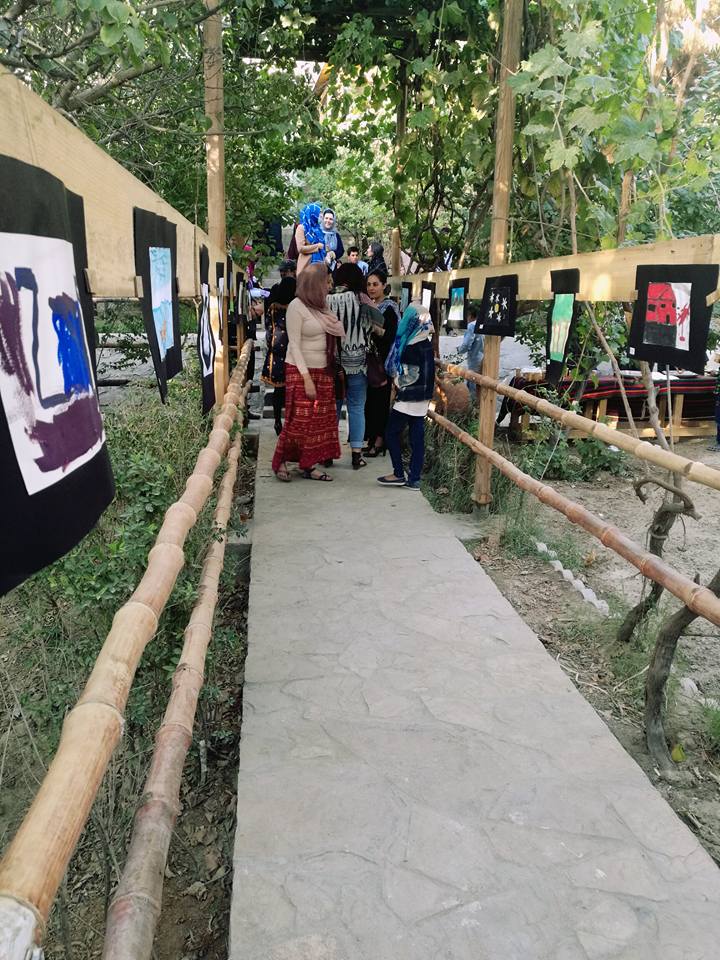 Students painted their own ideas too. Animals, houses, food, and even a few Western characters like Cinderella and SpongeBob SquarePants.

As the summer wore on, Akbar asked local artists to help her curate a juried show.

“I was too close to the children to select the artists and the art,” she says.

Akbar used what little was left of her grant to purchase black paper to frame the artwork and then displayed it on walls, trees, and boards in the courtyard.

On opening night, all the children were there. Add to that local media and 50-60 local artists and social activists. The children were excited or upset, depending on which work made it past the jury.

“They were so cute,” she says. “It was bittersweet for me. Yes, I opened a new door for many of them, but my class was a short-term solution to a bigger problem. I want to address child protection laws, ways to support needy families, and a broken education system.” 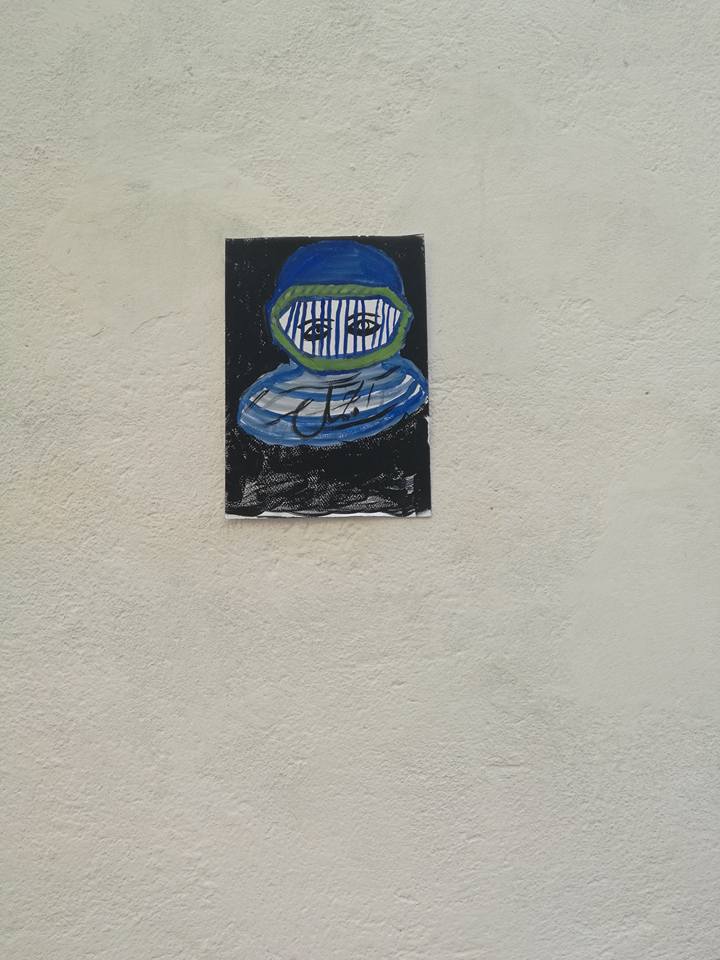 Despite her desire to do more, Akbar celebrated the art exhibit’s success. Each painting was on sale for 500 afs, about $10. The guests were passionate about the work and raised more than 8,000 afs. That $160 went right back to the school to help future programming.

Akbar bought artwork from one of her favorite students, an 11-year-old girl. The image is of a house with a big pink tree in the yard.

“I love how hopeful she was, and the colors she used captured it,” says Akbar. “She could be a young girl who drowns in her life under the difficulties she faces, but she was kind and open.”

Many of the female students looked up to Akbar. She, though, held all students in higher regard.

“These kids are the most important group in Kabul,” she says. “Soon they will vote and help the country, so they need to be educated into strong adults.”

The kind of adult who, like Akbar, will return home after college and find a career at an organization that will help children and women.

And so lives the eternal question: Does life imitate art or art imitate life? In this case, yes.