Read the winning entries from the Flash Fiction contest. Twitter

In a letter written in the mid 17th century, the French writer and physicist Blaise Pascal said, “I’m sorry I wrote you such a long letter; I didn’t have time to write a short one.” In this spirit, writers from Lafayette this fall entered the College’s annual Flash Fiction contest. They entered short stories, and each submission had to kept under 500 words, including the title. 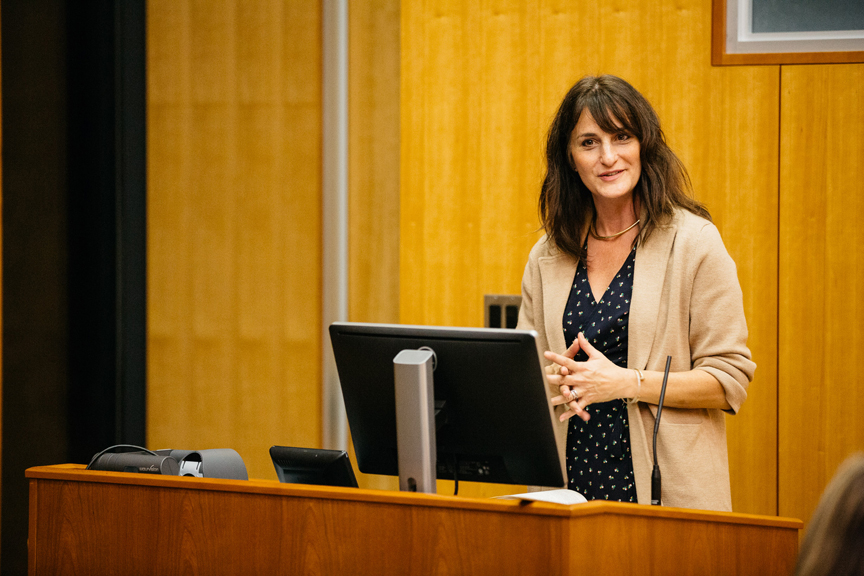 Novelist Kate Brandes judged the competition. She and the winner and honorable mentions read their work at an event at Skillman Library.

The wire had a low buzz that reminded me of my place. My long strides took me through the long grass and itchy straw. With every step I kicked up mud onto the backs of my calves mom wouldn’t be happy if she had to wash my jeans again. Stopping to pick up a dandelion, I rubbed it on my chin. I giggled as its petals tickled my young skin, remembering the tale my dad told me about how if a dandelion makes your chin glow yellow, you like butter. I loved butter, and I love dandelions. “The weeds we never pick,” my grandmother used to remind me in the summers. They were beautiful, and meaningful to my naïve mind, blowing breath into my imagination, as my own exhales blew out the white hairs of the elderly dandelions that had taken their own last breaths. I wished for more life, and for no one I loved to ever grow white hairs like the past flowers. Ignorance. The quietness hung in the air like the dew clinged to the blades of the grass, gently but with intention. It settled in between the stones that I climbed on as I followed the rock wall the length of the field, the stillness guiding me. It was a comforting quiet. The kind you felt when you lied down in bed after a long day, finally settled in just the right place, and the world felt still for just a moment. That quiet. Each stone I bravely put my foot on was a risk, would it wobble? Would it break? None of them lost my trust. The stones taught me more than balance. At last I had come to the large pointed rock at the end of the wall, no place to step on it, it would hurt too much to sit, so it was time to get down. Direction. My feet hit the soggy earth, and I squatted to brace the impact. Adaptation. I walked along the fence line, and saw the large birch in the middle of the field, I picked as many close dandelions as I could, and ducked under the top wire, full of life, and into the field. Diversion. Avoiding brown piles covered in house flies, I made my way towards the birch tree, handful of butter-likeness-determining flowers, and jeans caked with mud. Looking up at the tips for the branches, I saw that the littlest twigs blended with the sky, and clouds moved in. Smallness. Finally I came to the spot in the grass behind the tree, that was slightly lighter in color. White hairs of a dandelion. I laid the fresh flowers down and asked, “Do you like butter too?” Endings. 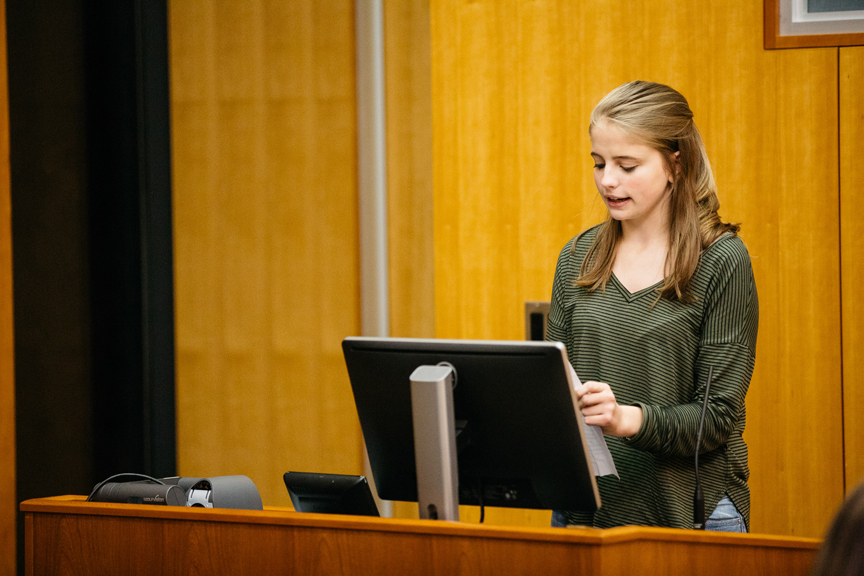 Honorable mention: To Step into the Sun

Note: This story contains an instance of profanity.

Brandon has always been good at hiding. At the moment, he is in a bathroom and should go back out for lunch. Brandon already hates this place. He hates everyone’s too-wide smiles, that they are so open talking about things he keeps hidden. But more than that, he hates that when you arrive they take your razors, your nail clippers, your cell phone—it makes him feel powerless.

The name of the place where Brandon is staying is Green Mountain Treatment Center for Anxiety Disorders for his Obsessive Compulsive Disorder. Brandon doesn’t have it as bad as many of the people here, and he’s only here for the summer.

It should be noted, that Brandon did, in fact, choose to come here. Brandon doesn’t want to be the type of guy who makes everything about another person, but his treatment journey started with someone else. Zack.

Zack had a new boyfriend now. Ethan, who was always talking about his feelings. Elias who never ignored his texts when he was feeling tired or…foggy. That was the word Brandon had to best describe when his brain got stuck. There was this tightness that came when things didn’t feel right. He would be okay, but suddenly his OCD would shove a thought into his brain, one telling him that his parents were hiding something, or maybe Zack would respond with just a K, and Brandon was convinced that Zack didn’t love him anymore.

Zack doesn’t love him anymore. Zack’s exact words to describe Brandon had been distant, emotionally unavailable and self-involved.  Zack had always had a vast vocabulary. Brandon had thought to himself, many times, about telling Zack. Sitting him down and saying, Hey, I have OCD but mine is not the cleaning and organizing kind. Zack would lean in, confused, and Brandon would teach Zack everything he wanted to know. The idea for him now is to maybe build up some skills here—for coping with his anxiety and intrusive thoughts…and tell Zack. But Brandon wasn’t doing this all for Zack. It was just the final straw, once Brandon had looked around and realized he’d lost multiple friends, and somehow ended up so completely alone.

The lady with a too-wide smile that said she was a therapist—Brandon forgets her name, there are so many fucking therapists here—says it takes time to cope with being in a treatment setting. However, seeing everyone here with their tight facial expressions, it is clear to him that he won’t fit in here.

Brandon inhales, making his decision. He can do this. He can get help. He knows now that he won’t tell Zack—exposures, group therapy, social anxiety—but he thinks he can do this. If he gets help and can find out how to be less scared, more open…Anything to mend this without telling Zack about his disorder. But Brandon isn’t worried. He can do it. Brandon has always been good at hiding. 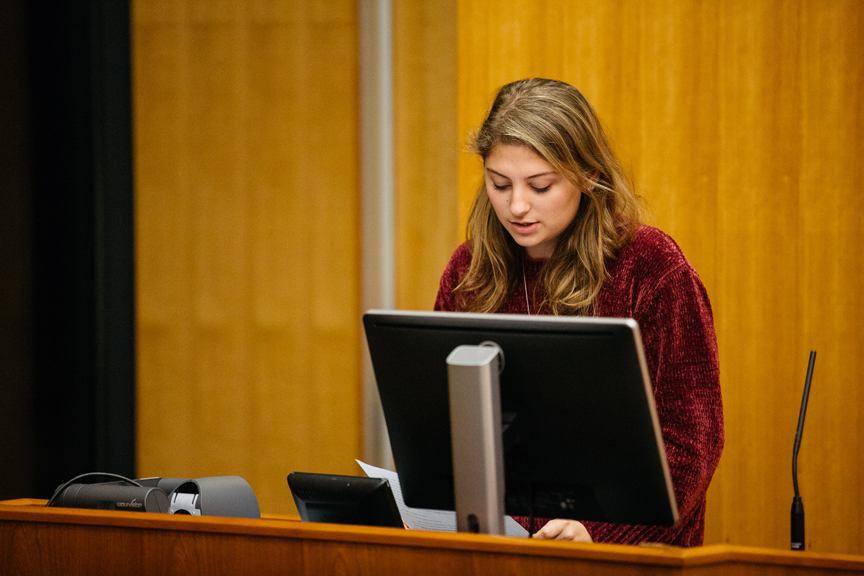 My footsteps strike a steady tempo on the pavement as I walk towards the bridge. At the base of the steps I remove my ear buds. The hustling sounds of the city fill my ears and invade my consciousness. The early morning fog flows slowly across the Thames River. I glance fixedly from face to face, trying to gauge their expressions.

Some are alone and listening with headphones, marching to some silent beat with their faces fixed forward. Others are in scattered groups conversing. I tune in briefly to bits and pieces of their conversations.

“Did you hear about Barcelona?”

“What about the tube the other day?”

They step around the spoiled flowers and wet wrinkled pictures taped to the green railings.

“Where do you think it could happen next?”

“Anywhere, I guess. I heard that there was…”

I concentrate on my steps, but I keep my eyes fixed on Ben as he grows minutely taller and taller with each footfall. Focusing my gaze on the clock makes my feet feel drawn towards the tower as if with a soft magnetic pull. My calf muscles begin to burn slightly, but I keep my pace brisk.

The faint sound of a car engine approaching from behind forces itself into my attention. My steps quicken. I glance around. The faces around me are blank. They give away no warning or sign of alarm. But I can hear the imminent drone of the engine as it closes in from behind. My chest tightens. I concentrate on controlling my pace, but then the car passes to my right with a deafening WHOOSH! The sound rings in my ears and explodes in my head. I feel the blast of air crash into my body as the car drives past. There is a rushing feeling of adrenaline that races towards my extremities ending in my fingertips and toes. My hands ball into fists to cut through the tingling sensation.

I am frozen on the sidewalk. I swallow multiple times to try and subdue the lump that has formed in my throat.

Finally, I resume my pace.

But my heartbeat outruns my footsteps.

Lately it feels like my footsteps will never catch up. My body can never relax. And my pace can never be anything but steady and brisk. If I stop, something could happen. If I’m not careful my picture could be taped up on that railing someday.