You go to dinner. After an app, you can’t eat the full main course and side, so you get a doggie bag. That food gets lost behind a few other jars and cartons and languishes in your fridge for a week. When discovered, it fails the stink test. Into the trash it goes.

Sound familiar in your house? Imagine homes across the country.

Food waste in America totals 60 million tons per year according to Brendan Betts ’19, an  economics and biology double major. Sadly, the bulk of food is not old restaurant leftovers; it is perfectly good food.

Nearly two-thirds of it never leaves the farm. It may have an aesthetic flaw, like a bump, gash, or bruise, that prevents grocery stores from purchasing it because customers won’t buy it.

The rest of food waste occurs in grocery stores. This food meets aesthetic requirements but just doesn’t sell and reaches its expiration.

“Over 20 percent of dairy products, half of all meat/fish products, and much of the fresh produce will spoil on shelves, never donated and never sold,” he says.

That food is what Betts wants.

“It’s an economic catastrophe for groceries and food retailers, impacting the bottom line through lost inventory and additional disposal costs,” he says. “Why not pass it along to Griffon Grocers?”

Griffon Grocers is an idea in search of investors. Betts found some at the recent 50th anniversary dinner of the Marquis Society. Donors who have gifted the College at the $1,000 level enjoyed an evening event at the start of Homecoming weekend.

It was there Betts pitched his idea to Marquis Society members who have a keen interest in business innovation. He competed against Adam Rosen ’18 and Andrews Winn ’18. All three were selected as finalists in an elevator-pitch competition sponsored by the IDEAL Center for Innovation and Entrepreneurship.

“It was nerve-wracking,” says Betts. “I was on the edge of my seat.”

But he had to stay as cool as a blemish-free cucumber. “It was a night to network with successful alumni, but it was hard to stay fully present because I was rehearsing my pitch,” he says. “I just wanted to be more interesting than the appetizer.”

All three students pitched their ideas and then waited until dessert to hear whom the audience had voted for. Winn’s idea was about drivers renting their rear windows to advertisers. Rosen pitched an app that would allow gamers to place small wagers. 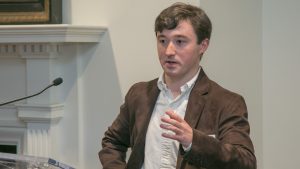 “It’s not a store, and it would have no inventory,” says Betts. “We’d work directly with retailers to secure products set to expire and then locate interested customers and expedite delivery to them. In today’s world of same-day shipping, we can find ways to incentivize consumers who can use these products.”

All the presenters worked with Yusuf Dahl, director of the IDEAL Center, to craft and refine their pitches before the big night. “He quizzed me on potential questions I’d get from guests in order to help shore up my idea,” says Betts.

During the dinner portion, presenters sat with the guests and tried to eat. “I can’t say I had a big appetite as I waited for the results,” Betts says. “But I did get some amazing insights from guests and made some great business contacts.”

When Dahl announced that Betts had won, he was psyched and shocked.

“My competitors were flawless with their pitches,” he says. “I felt honored to win.”

The $300 prize can help move his idea forward. Betts will add it to an account he’s been accumulating since he was young.

He’s been planning to open his own business for years, so maybe someday soon, you will be placing an order at Griffon Grocers.