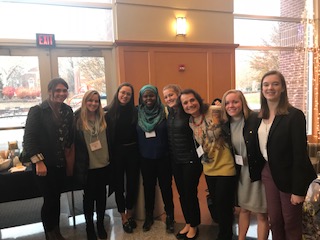 Why did Romans select an arch as the monument to honor Emperor Constantine? Why don’t liturgical vessels that make up the Vrap treasure include the control stamps that usually indicate Byzantine artwork? How did the Pala d’Oro, an altar in a church in Venice, exemplify interaction between various cultures within the Roman empire?

Seven Lafayette students presented their research on cultural icons of the world of Byzantine art in December at a conference hosted by Moravian College in Bethlehem. Six took the Byzantine art class taught by Ida Sinkevic, professor of art and chair of Russian and East European studies, and one had a class with Olga Anna Duhl, Oliver Edwin Williams Professor of Languages. The students chose topics and dug through source materials on them throughout the fall semester, then submitted abstracts about their work to conference organizers.

“The paper started out as a project of the heart,” says Julia Dinella ’18, an art and French double major. “The project was assigned to us the first couple days of class in the semester. Professor Sinkevic wanted us before we knew anything about Byzantine art to go online or in our textbooks and find something that stood out to us.”

Dinella chose the Pala d’Oro at the Church of Saint Mark’s in Venice. She’d studied abroad in the spring and recognized the work.

Below are abstracts students submitted:

Alexandra Arnold ’18
Images depicting the Virgin and Child are among the most widely produced and observed images in the world. These images are ubiquitously present among both eastern and western cultures throughout history. The Hagia Sophia in Istanbul has been widely studied as a church of remarkable importance for Byzantine culture. Within the apse of this church lies a breathtaking mosaic of the Virgin and Child dating back to the ninth century. This image holds prodigious importance as it gave impetus to images of the Virgin and Child in the post-iconoclastic world in the East and West. The cultural and religious declaration that this image created in its unveiling gave rise to a new period of religious figurative art in the Byzantium. Scholarly writing has linked a sermon given by the patriarch of the Byzantine empire to this image which further exemplifies its religious and historical prominence. This image became the foremost catalyst of the reintroduction of icons into Byzantine culture, an art form that holds great spiritual value for its participants. The radical techniques, style, size, and pure beauty of the image further contribute to this image’s significance. For these reasons, the apse mosaic of the Virgin and Child in the Hagia Sophia is one of the most powerful images in Byzantine art.

Julia Dailey ’18
The Arch of Constantine was one of the first Christian monuments in Rome. The Roman Senate dedicated it to Emperor Constantine I (272 AD–337 AD) to celebrate his victory over Maxentius at the Battle of Milvian Bridge in 312 AD.  Constantine I was the last Roman and the first Christian emperor, and he attributed his triumph in this decisive battle to the divine intervention of Christ. Although the arch follows established conventions of glorifying the emperor through both classical iconography and form, it nonetheless contains religious overtones as well. This arch is also distinguished for the extensive use of spolia, recycled elements from other monuments for sculptural decoration. In addition, the arch also displays the use of different materials in its core posing the question whether the entire arch was originally intended for Constantine or had it been built earlier for another emperor and just appropriated for Constantine after his important victory. This paper aims to place the arch into a historical, religious, and artistic context in order to better discern its origin and its original purpose.

Margaret Rusnock ’20
As a result of the iconoclasm in the eighth and ninth centuries, the clear distinction between the image of the cross and the crucifix was evident in Byzantine art. While crucifixes were extremely uncommon because of their direct connection to Christ’s body as well as their representation of Christ’s passion, death, and resurrection, crosses were prevalent because both factions of the iconoclasm accepted them as purely a symbol of Christ’s victory over death. Contrary to this pattern of the Byzantine East, crucifixes became increasingly popular in the Christian West. Thus it is surprising to discover evidence in literature of a now-lost crucifix in the apse of the Hagia Sophia, the major cathedral church of the Byzantine capital, Constantinople. This paper will examine potential patrons of the crucifix as well as the political, religious, and social circumstances by which the crucifix came to reside in the Hagia Sophia.

Zainab Hussein ’17 (studied with Olga Anna Duhl)
Le Roman de la Rose (Romance of the Rose) is one of the most influential French narratives of the early-modern period. The first part of the book, written by Guillaume de Lorris, focuses on a love quest told as a dream vision by the main character. The object of desire is a woman represented allegorically as a rose protected inside a walled garden, which is also symbolic of female sexuality.

The wall of the garden serves as protection for the rose. However, while the inside of the garden contains allegories of female virtues, the outside of the wall depicts the vices that represent obstacles raised by society to control desire.

This paper examines the allegorical figures depicted on the wall of the garden as a source of tension between the narrator’s own psyche and the societal forces that regulate human sexuality in the medieval period.

Paige Fenn ’19
The image of the Virgin and Child is one of the most well-known symbols in the Christian world. Throughout the Byzantine era, many versions of the Virgin and Child were depicted; each form was meant to highlight an important attribute of the Virgin. In the Eleousa icon type, the Virgin holds Christ in her arms and presses their cheeks together. The Virgin Eleousa, or the Virgin of tenderness and compassion, is meant to emphasize the Virgin’s empathy with humanity, as well as the bond of mother and child. Christ wraps his arms around his mother and looks at her tenderly. The Eleousa icon first became popular during the period of the iconoclasm. Images of the Virgin Eleousa were executed in a variety of sizes and materials, including large panel paintings and church mosaics as well as small-scale jewelry and liturgical utensils. This paper focuses on small late-byzantine icons of the Virgin Eleousa. The icon specifically discussed in this paper is the Portable Icon of the Virgin Eleousa, dated to the 13th century and currently on display in the Metropolitan Museum of Art, a luxury object of personal devotion. The dimensions of the object are 4 7/16-inch by 3 ⅜-inch, made in a precious mosaic technique. Comparing this icon to other icons of a similar subject matter, this icon is distinguished by its small size and exquisite craftsmanship. This paper takes into consideration the social, religious, and historical context when analyzing the purpose of this small exquisite icon in its original context.

Julia Dinella ’18
The Pala d’Oro, the high altar of the Church of St. Mark’s (1063-1071), is an exquisite work of art. Decorated with 187 cloisonné enamel plaques, 1,927 gems, and mounted in an ornate gilt frame, it stands at 10 feet wide by 6 feet tall. The Pala d’Oro underwent three periods of renovation before it acquired its current form. The original Pala was commissioned in 1102 from Constantinople by Venetian Doge Ordelaffo Falier. This first version was completed in 1105 and includes the lower part of the altarpiece. The Pala was restored in 1209 and again in the middle of the 14th century.