To celebrate Women’s History Month, we asked current students to share with us a meaningful piece of literature and answer this question: How do you hope to be an example or role model for future generations of women? This is what we found. (Photos by Clay Wegrzynowicz) 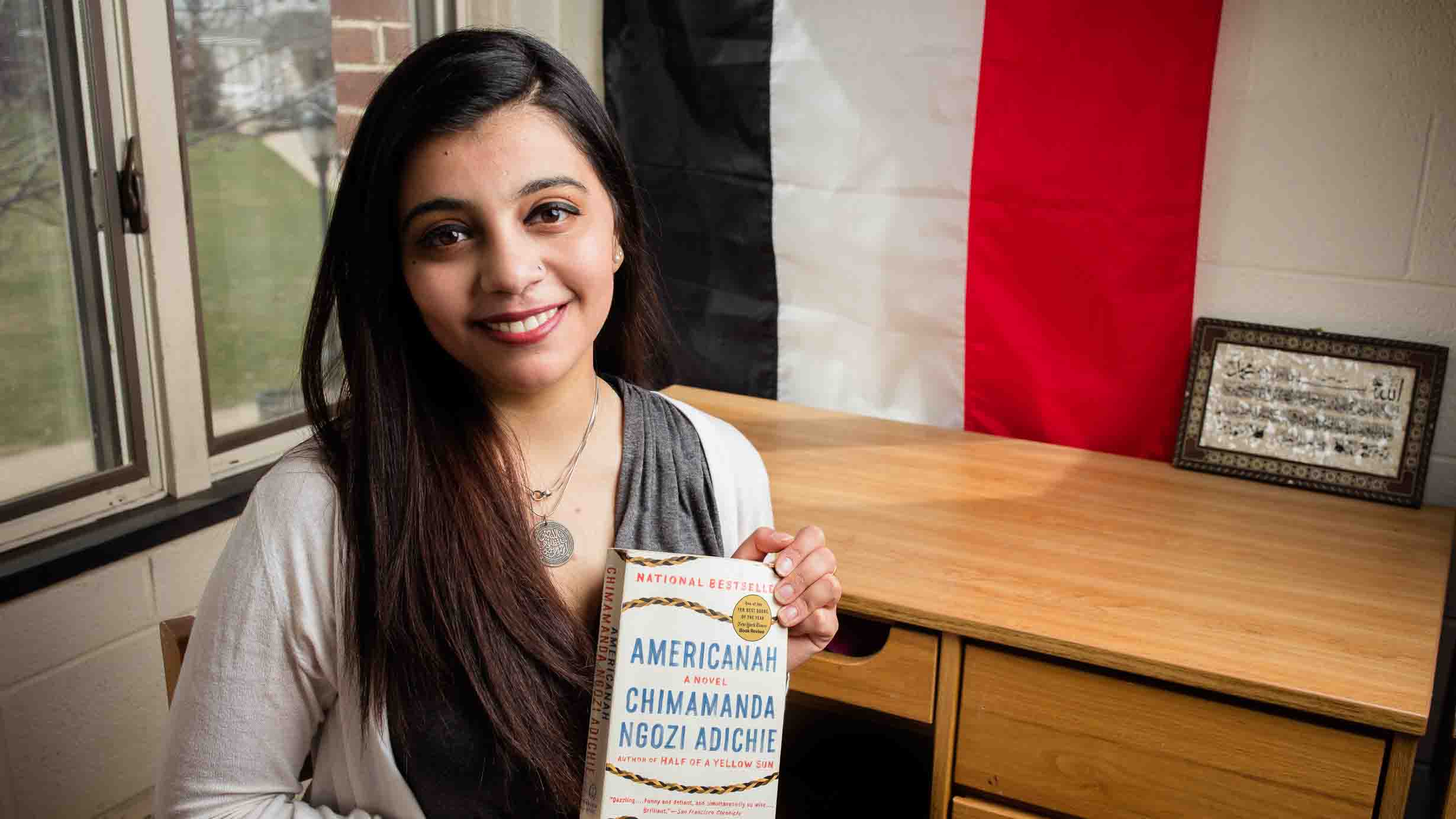 “By being true to myself, I hope to be a positive influence to other women, especially women who might feel the need to change who they are in order to to fit in. You’re a citizen of the world. Please don’t conform or twist yourself into shapes to please. It took me a while to learn that being unapologetically myself is the best that I can be. My culture, language, and parents formed who I am today, and for that I’m forever grateful. I could make a home out of Lafayette by being true to myself and I hope that you will too.” – Noureen Abdelrahman ’18 (chemical engineering)

Noureen is holding Americanah, a novel that tells the story of a Nigerian girl who moved to the United States at a young age. “It is very similar to my story, which is why I read this book more than once,” she says. “And I highly recommend it.” 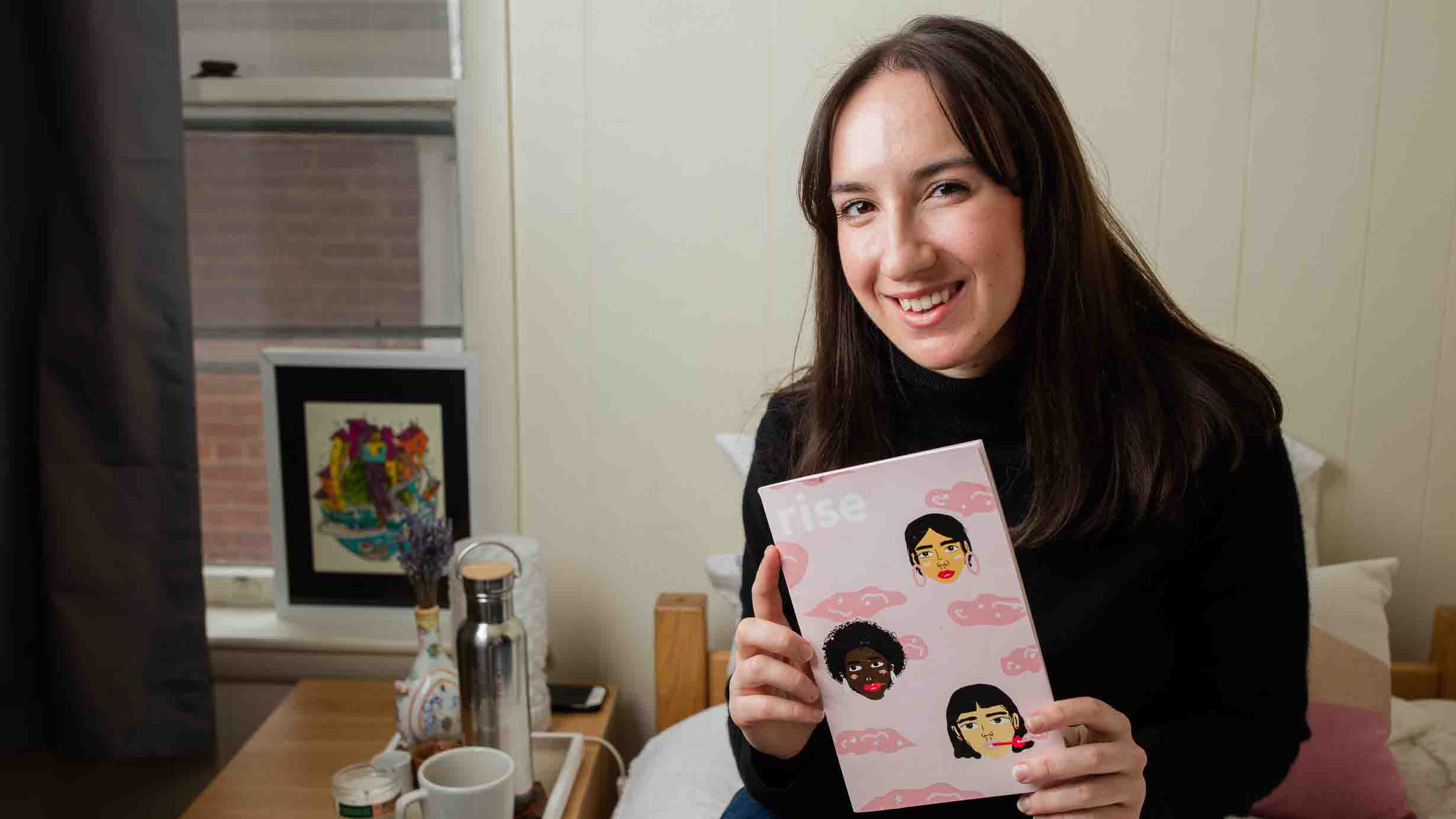 “My grandmothers and great-grandmothers were some of the most powerful examples of womanhood in my life. They were each renowned for the generosity with which they shared their skills and talents—whether it was always keeping a pot of soup on the stove for migrant workers during the Great Depression or serving as a director of operating rooms. I hope that I can emulate their legacies and, by doing so, model to future generations of women to compassionately and generously advocate for justice in their daily lives.” – Emma Sherry ’18 (government & law and Spanish)

Emma is holding the first edition of Lafayette’s intersectional feminist zine “rise” because it showcases “the many incredible women (and others!) on our campus who have collaboratively worked to create feminist art and literature and have formed a platform to elevate the voices of people of all identities,” she said. 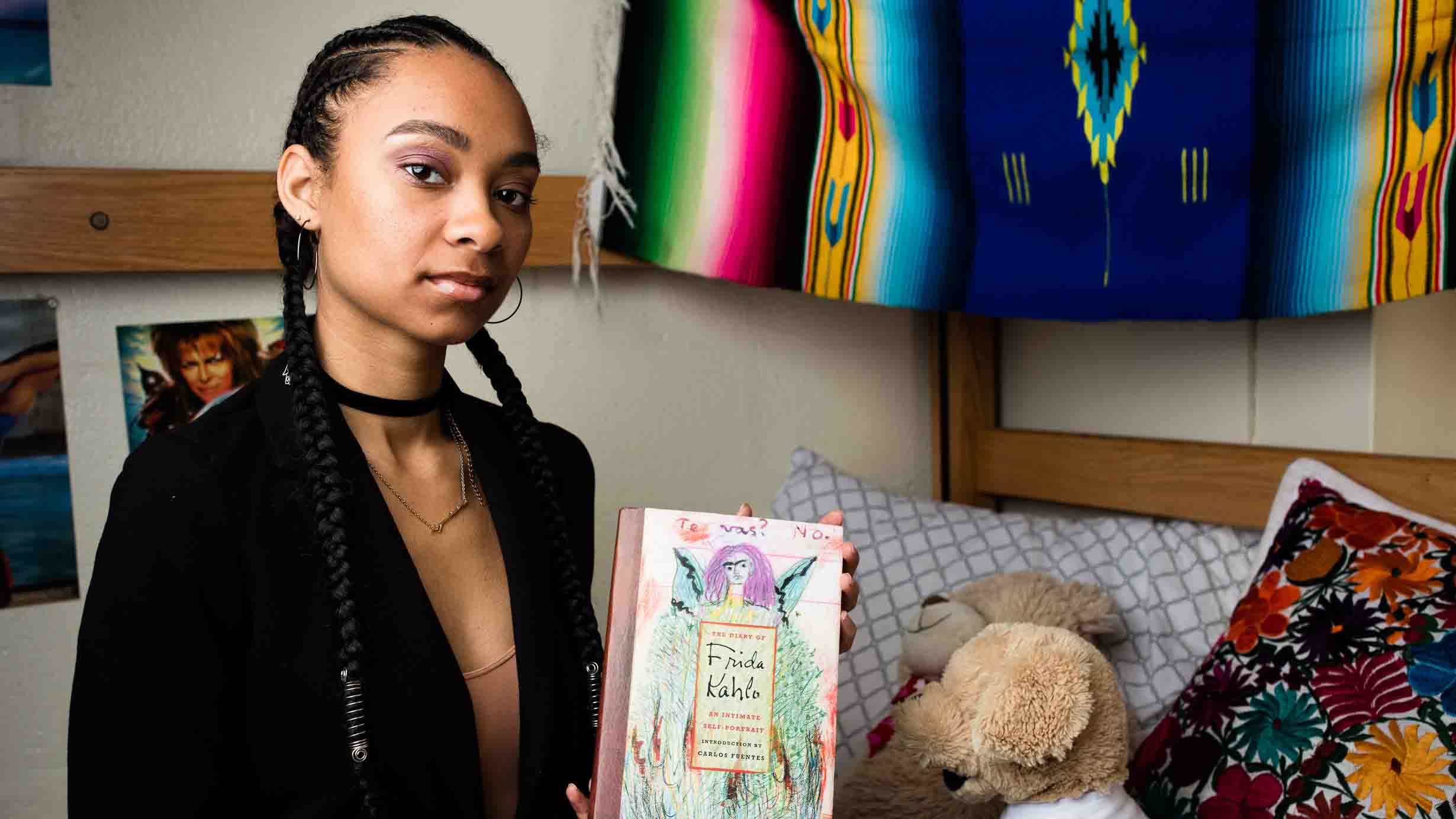 “I want to be an example of a Black girl who experienced hardship, poverty, and racism and did not let the judgement of her skin obscure the beauty of her character. As I move into the art world, I want other Black girls to know that neither the color of their skin nor the gender they identify with defines what they can do. I want them to be uplifted to see a photographer who looks like them and their family. I want them to have hope.” – Elle Cox ’21 (art and psychology)

“I chose The Diary of Frida Kahlo because growing up in Houston,Texas, I was surrounded by hints of Mexican culture. My mom raised me on Mariachi music, novellas, and Mexican artists. I am Afro-Latina; however, my Latina lineage is from Spain, and I believe it was a way for my mom to feel connected to something she lost long ago. Frida Kahlo reflected the pain and passion that my mom and I felt and, as an artist, I have looked up to her work ever since. She was a strong woman who embraced that womanhood no matter the consequences and it gave me immense hope,” she said. 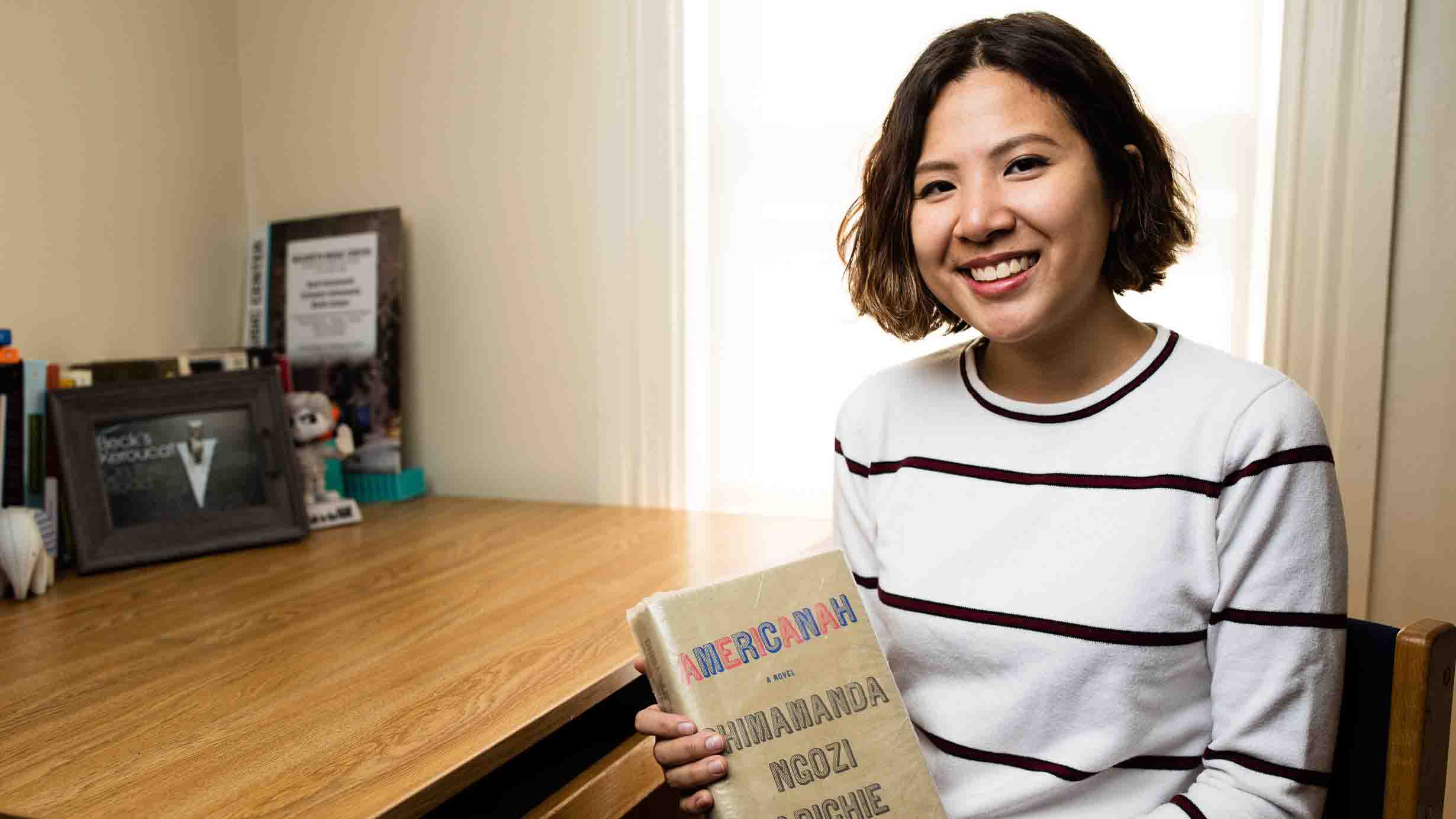 “I hope I can help future generations of women understand that they deserve to be in positions of power, and they should not allow anyone to delegitimize their right to be there. ‘Feminine’ characteristics are not signs of a subordinate, and neither should women be forced to soften their ‘attitude’ just because of society’s preconceived notions of what a female should act like. Women are uniquely and perfectly qualified to lead, and it’s time society acknowledges that.” – Rebecca Wai ’18 (policy studies and economics)

Rebecca too chose to hold Americanah, but it holds a different meaning for her. “The main character, Ifemelu, broke through the struggles of navigating America as an immigrant woman of color by finding her own voice and believing that it mattered just as much as any American’s—something I am trying to work on. But even after all her success, her home country still calls to her heart, just like Singapore calls to mine.” 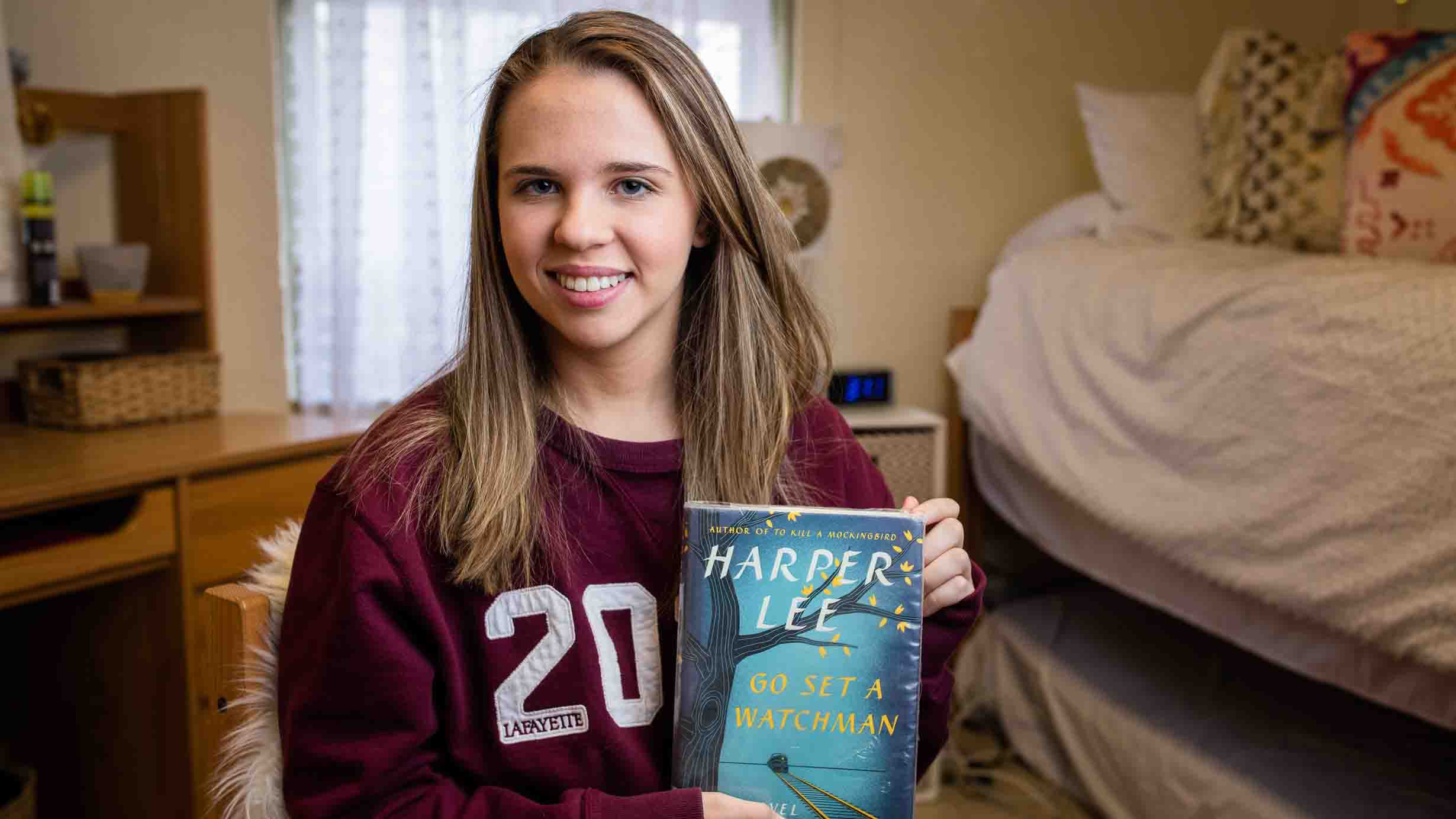 “I’m an economics major, and I plan on entering the financial services industry when I graduate. I hope to be a role model for future generations by showing that there should no longer be such a thing as a male-dominated industry. Women are smart and powerful, and when we put our minds to something, no obstacle can stand in our way.” – Julia Hoffman ’20 (economics)

Julia is holding Go Set a Watchman because of how influential Harper Lee was. The author won a Pulitzer Prize in 1961 and was awarded the Presidential Medal of Freedom for her contribution to literature in 2007. “I think Harper Lee is an inspiration for any woman,” said Julia.