This week, an audience at the Williams Center for the Arts will witness a hypnotic explosion of color and form underscored by a blend of music and poetry that bring traditional Sufi and Middle Eastern poetry sweeping into the modern age.

Niyaz, an Iranian-Canadian musical group, is the latest act brought to Lafayette’s campus through the Tapestries program, which has already given the intimate College Hill community a breathtaking view of a world many have never before seen.

In 2017, the College became one of an exclusive group of schools celebrating Muslim cultures through a unique blend of artistic and academic programming. Tapestries: Voices Within Contemporary Muslim Cultures is made possible in part by a grant from the Association of Performing Arts Professionals, Building Bridges: Arts, Culture, and Identity, a component of the Doris Duke Charitable Foundation and Doris Duke Foundation for Islamic Art.

The object is “to recognize the vibrant diversity of Muslim arts, cultures, and identities throughout the world and at home in the United States,” says Director of Arts and Associate Professor of Music Jennifer Kelly. “In three semesters of programming through fall 2018, Tapestries is exploring a variety of contemporary Muslim artistic expressions. With input from students, faculty, administrative staff, and community members, the project engages communities through main-stage performances in the Williams Center for the Arts and extended interdisciplinary activities throughout the campus. Tapestries seeks to build new audiences, deepen understanding and awareness, and cultivate broad-minded global citizens.”

Already, Lafayette students have experienced the beauty of Muslim cultures from around the world, from the jazz rhythms of Senegalese legend Cheikh Lô to photographer Lalla Essaydi’s feminist response to Orientalism. They have participated in a Muslim prayer service on the Quad. They’ve thumbed pages of calligraphy, heard the personal stories of Muslims living in New York City, and read the work of contemporary Muslim writers.

They will witness Niyaz and The Fourth Light Project at 8 p.m. Wednesday, April 11, at the Williams Center for the Arts. The group, in residency at Lafayette this week, will offer a pre-concert talk at 7 p.m. in Williams Center room 108. Group members Azam Ali and Loga Torkian participated in a Facebook Live event this afternoon. 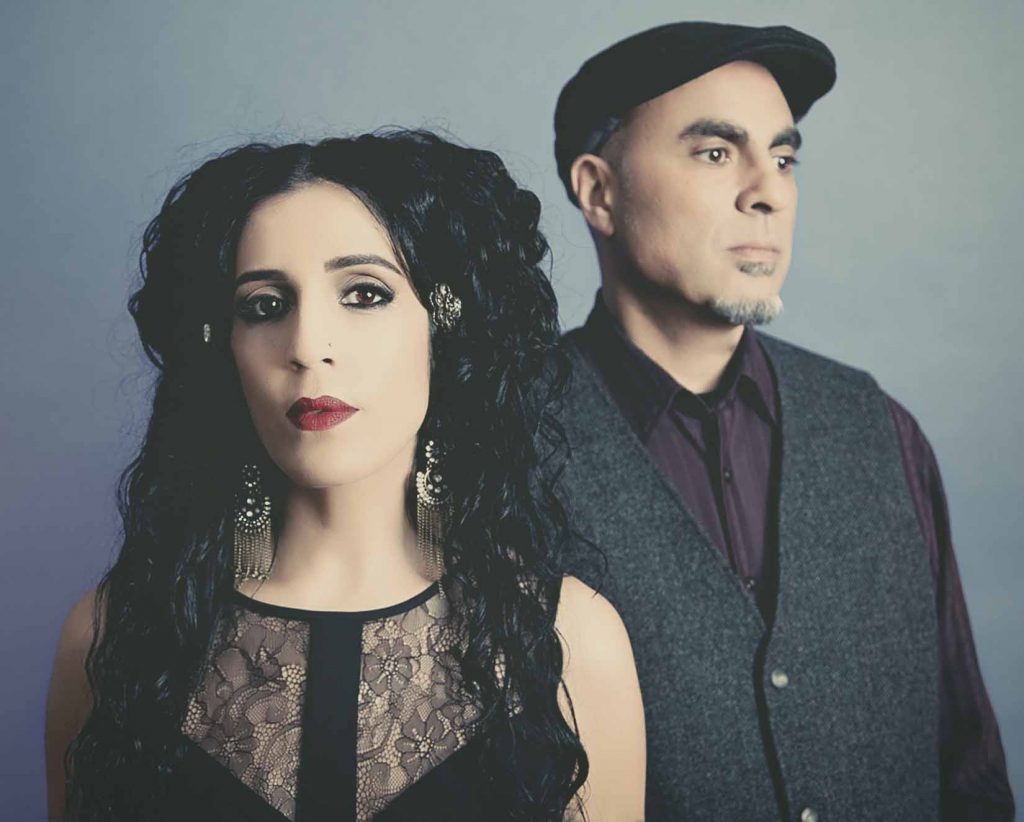 Students had other opportunities to interact with the artists. They participated in a Sufi Whirling Meditation workshop and shared lunch with the group, where they discussed feminism in the Middle East.

“The variety of the artists that are being brought to campus is very exciting, and I believe is a good representation of how diverse ‘Muslim culture’ truly is,” says Ayat Husseini ’20, president of Muslim Students Association. “My perspective has changed slightly in that I am understanding how so many of these artists are able to critique both ‘Western culture’ and ‘Islamic culture’ in their pieces. It has given me a new understanding of the mechanisms an artist can use to be an advocate.”

“The objective of Tapestries,” says College Chaplain Rev. Alex Hendrickson, “is to humanize a global population.” 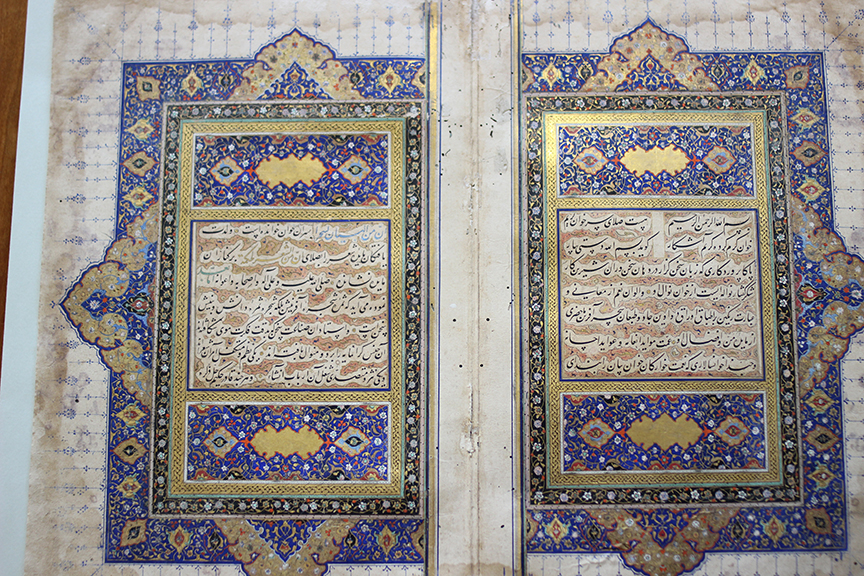 At Lafayette, Tapestries is accomplishing that in part through forces already arrayed on campus. For example, Wendy Wilson-Fall, chair of the College’s Africana studies program, is a frequent visitor to Senegal, where she recently took a group of students. Working with Hollis Ashby, artistic and executive director of the Williams Center for the Arts Performance Series, she used her connections in the country to help woo Lô to campus. In the fall, students didn’t simply watch Lô in concert, but had a chance to engage the world-renowned performer in classroom discussions and a prayer service.

“It offers another dimension to our students’ education,” says Jennifer Philburn, director of marketing for the Lafayette Arts. “The media often provides one-dimensional portrayals of any minority ethnic or religious group. Muslim identities are all-too-often portrayed in the mainstream narrative of this country in terms of geopolitical upheaval. Lafayette’s Tapestries initiative is an opportunity to explore a wider story, focusing on Muslim arts and cultures specifically to try to chip away at preconceived notions and flat portrayals of very diverse identities.”

The College has been working for years to bring that perspective to Easton. This was Lafayette’s second attempt at being awarded a Building Bridges grant from the Association of Performing Arts Professionals and the Doris Duke Charitable Foundation.

“A wide interdisciplinary coalition from the campus and community has been working for a long time to bring a college-wide initiative like Tapestries to campus,” Kelly says. “We are proud that we are one of only seven schools, and the only liberal arts college, across the United States to be awarded the grant, and we are proud of the impact it is making on our students and community.” 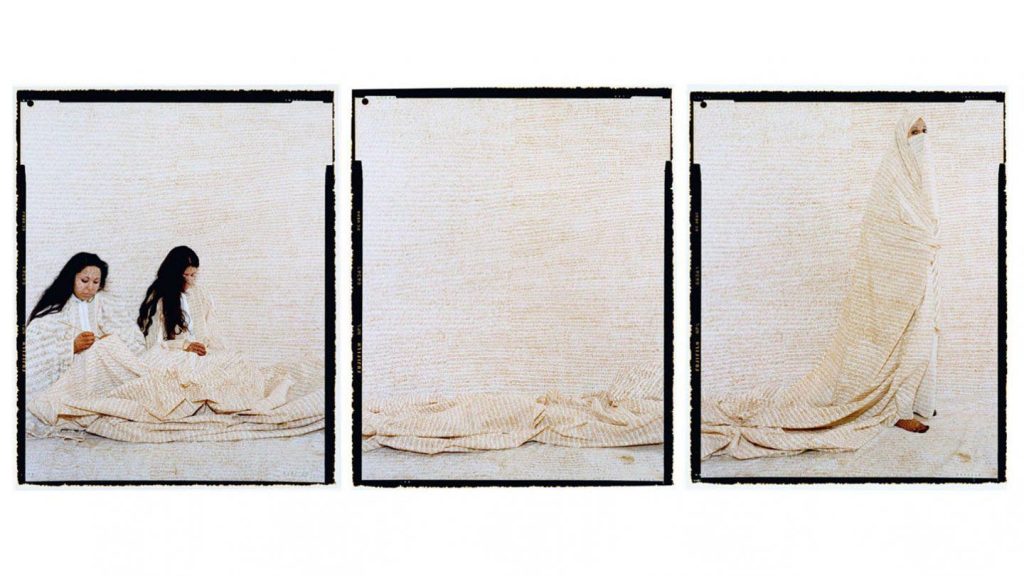 Photographer Lalla Essaydi’s work is on display at the Williams Center for the Arts gallery.

That impact has been experienced by students and members of the community in many ways, from participating in Muslim prayer ceremonies with Lô to interacting with artists and scholars from many nations. The works themselves can be illuminating for faculty members and students alike. For example, at a recent Tapestries production of the Pulitzer Prize-winning play Disgraced, which touches on Muslim issues, Suzanne Westfall, head of theater, watched Muslims and non-Muslim actors learning from one another. One performer, Ethan Simmons ’18, who played the role of Isaac, an art dealer, learned about “how beautiful and frightening faith can be.”

No program can change a culture in one or three semesters. But Tapestries is creating opportunities and conversations and opening a door to a wider world that has inspired and developed greater understanding for everyone who has walked through it.

“I think that Tapestries is doing a good job at inching the needle forward,” Husseini says, “but there is still much work to be done.”

Categorized in: Africana Studies, Featured News, Humanities, Music, News and Features, The Arts
Tagged with: The Arts, Williams Center for the Arts