For two weeks in summer 2016, Lake Iseo in the mountains of Northern Italy was born again. People strolled along thoroughfares made of shimmering yellow fabric stretched across the water between two coastlines and wrapped around an island. 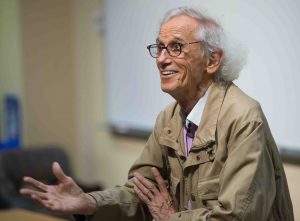 In 1972, a 1,250-foot curtain unfurled between two Colorado mountainsides, where it remained for 28 hours before being destroyed by a freak windstorm.

In 1983, 11 islands in Biscayne Bay on the east coast of Florida developed colorful halos of polypropylene fabric.

These visually powerful installations are the work of Christo and Jeanne-Claude, legendary figures whose art has for decades captured the imaginations of the art public and general populace around the world. On April 4, Christo made his third visit to Lafayette. (His artistic partner and wife Jeanne-Claude passed away in 2009.) This time he came as the 2018 Richard ’68 and Rissa Grossman Artist-in-Residence. 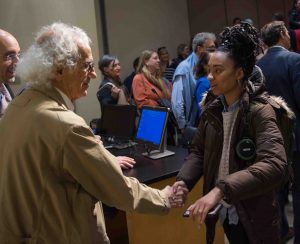 “You should see it today,” Christo said of his work before a standing-room-only crowd in Oeschle Hall, “because tomorrow it will be gone forever … We always try to do something that should not be repeated … This is the adventure.”

To art major Pablo Pollish ’18, Christo’s visit was a historic moment. He became a fan of Christo’s work when he was in high school, particularly his early wrapped works created after Christo moved to Paris in 1958.

“He used such a vast amount of texture,” Pollish said, “which clearly drives his work. Working with fluidity and cloth, all of it, it just moves … Looking at early works inspired me to work with texture.” 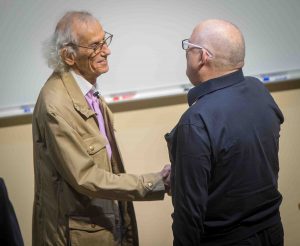 Christo was born in Bulgaria in 1935. In 1958, he met Jeanne-Claude. The couple went on to amass one of the most storied careers in the art world.

Sometimes for years leading up to the historic moments, armies of men and women build, sew, march, and organize, all to transform familiar vistas into something new. The works are temporary by design—most are intended to be displayed for two weeks—so that the immediate experience of them is everything. 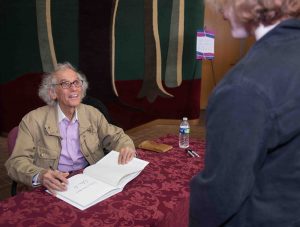 “I first saw his work in middle school,” said Elle Cox ’21. The art and psychology double major was among the group that attended a poster signing and meet-and-greet with the artist after his presentation.

She was struck by the size of the canvases. During his speech, someone asked Christo when his art had gone from wrappings, like the time in 1995 when he and Jeanne-Claude wrapped the Reichstag in West Berlin with a silvery fabric, to projects like The Gates in Central Park, which featured many singular installations.

Cox says that part of Christo’s presentation struck the loudest chord with her. It seems so simple, but art is an accumulation, not one component. “That to me was a special insight,” she said, laughing. 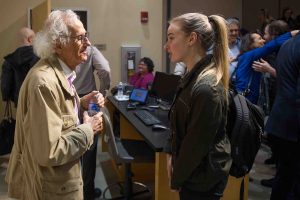 Christo presented a slideshow of his work, including some projects that are still forthcoming. Since 1977, he has been preparing The Mastaba, a massive sculpture, larger than the Great Pyramid of Giza, crafted from 410,000 multi-colored barrels.

“Once I get the green light in Abu Dhabi, it takes three years,” he said, “I am not interested in a retrospective. There is so much to do. Every project is a new adventure.”