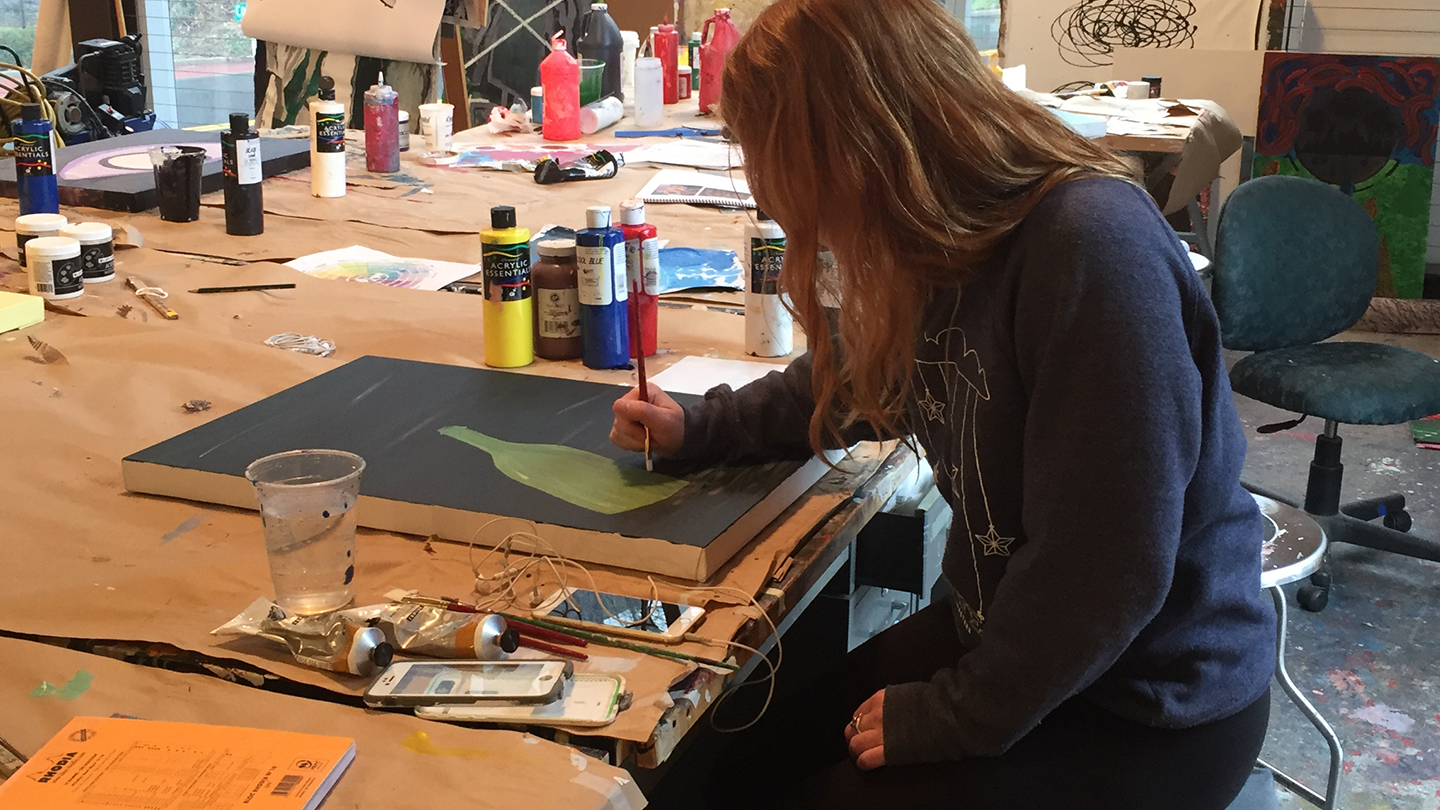 Kayla Zola ’18 sits alone at one of the long wooden tables on the second floor of the Williams Visual Arts building and works on her champagne bottle.

Rainstorms have lashed College Hill since late last night, but that didn’t stop Zola, an environmental sciences major, from making the trek down the hill for her 9:30 a.m. Introduction to Painting class.

“I don’t know if people are coming,” she says, adding a stroke of green to the oblong shape on the black canvas at which she’s been laboring for two days. It’s one of five or six paintings she’ll complete for the class, this one a study in surrealism. When she’s finished, she expects an image of a champagne bottle popping but with flowers pouring out instead of foam.

In May, Zola will pop the cork on an actual celebration—her graduation—and now she’s down to weeks to fit everything in. She’d long wanted to take painting class. She’d tried her hand at a few projects in high school and always enjoyed painting. At Lafayette, she never seemed to have time until this, her relatively light final semester.

As the clock inches toward 9:30, her classmates begin to arrive, making their way through the maze of half-finished paintings that fill Williams’ cavernous studio space.

Students have 24-hour access to it. Zola usually indulges her artistic side during class time, though recently she and a friend visited the studio around 8 p.m. and did some “pours.”

She held up a square of cardboard covered in blotches of paint. “We did it to de-stress,” she says.

Around the corner, Zola’s instructor, Clapp Professor of Art Ed Kerns, chats in his office with Pablo Pollish ’18. The art major’s work covers the walls in an anteroom. Abstract shapes and coils curl over textures Kerns’ protégé has been trying out.

More than trying out. Running with. Over the weekend, Pollish had his own art show, which Kerns helped him organize. More than 100 people showed up to see Pollish’s work, and he made a few sales.

Before long, Kerns and Pollish stand and engage in what looks like a slow motion brawl. Kerns invites Pollish to throw a snail’s-pace punch at his jaw. The professor blocks Pollish’s blow with a forearm. The pair push one another and laugh.

It’s a demonstration of Tai Chi, the Chinese martial art Kerns studies. As with most things with Kerns, there’s a lesson in painting to be had from the play fighting.

“I think the physicality in painting is key,” he says as his students wander in his office for the beginning of class. The works of painters like Jackson Pollock were all about movement. “That’s the deal. When they were thinking, they were moving. It’s not as cerebral, painting, as one might think.”

“He could throw me across the room if he wanted to,” Pollish says, laughing.